I was already eating good food in NYC the day of my flight, as I somehow convinced the wife and daughter to attend the annual Grub Street Food Festival in LES, per Ziggy’s recommendation from the night before.  We arrived at the start at 10am and tasted the freshest bites.  The most memorable items included the melt in your mouth smoked short rib & pork shoulder chili with hominy from Char No. 4 (not Chanel No. 5 as they told me), borscht from Gifelteria, and coffee with a delicious pear walnut tart from Cafe Grumpy. 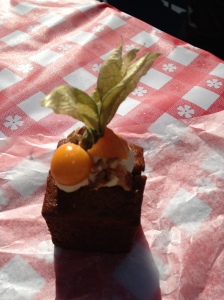 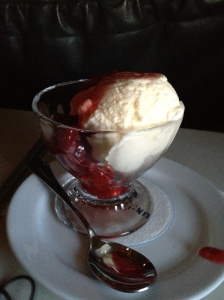 This was my first business trip in 2 years and last time I went to Des Moines, Iowa, enough said. First stop was at the Newark airport terminal C, the Grand Central Oyster Bar at the Newark airport Terminal C!!! Had a lovely platter of 8 oysters, the best in NYC, per Ziggy, and definitely the best at Newark Airport. Next was my first class meal with my 3rd Bloody Mary.  The chicken was a TV dinner, but the ice scream sundae on this United flight was a pleasant surprise.

There are 4487 restaurants in San Francisco according to an online review site and I’m here for 4 nights.  I think there are just as many restaurants as the homeless on the block of my hotel,  and according to a local friend they come here from all over the country to get paid a stipend and enjoy the mild weather. Apparently the city is believed to have the highest number of homeless people per capita of any major US city.  One of the reasons they arrive, in my opinion is…Sardines. It’s so important to the food scene, that Ziggy gave me an assignment to blog about “Sardines and anything else, but mostly Sardines.” It appears that there are actually no more than a dozen restaurants in SF that serve sardines, but I will look for Sardines as I don’t want to disappoint.

Lunch: The Melt – the place specializes in melted cheese sandwiches. Trust me they know what they are doing. I had the “ballpark sandwich,” a weekly special in honor of the SF Giants, spicy cheddar with hot dog and special secret mustard recipe – very tasty, they grill the bread perfectly and hide the pickle underneath the gourmet chips, all for $5.50.

For dinner I convinced my coworkers to have our first experience with Burmese food, Burma Superstar in the Inner Richmond neighborhood. I knew that the place usually has a 1 hour wait, but because the SF Giants were playing game 7 of the National League series, the place easily had room for 4. The restaurant looks like a typical eatery you can find in NY’s east village, but no human feels like a sardine here. What I didn’t know is that their tea leaf salad and rainbow salad were recently featured on the Food Network.

Each one was a perfect blend of ingredients, 21 and 25 ingredients respectively. As for the rest of the menu, I learned that the depth of smells and flavors far exceeds Chinese, Thai, Indian, and Korean food. I had a delicious mixed vegetable curry (pictured on left), my coworkers had the pumpkin shrimp and garlic shrimp dishes. The calamari salad was also outstanding. I had a Soju, Ginger, and lemon juice drink called “i know Kung  fu” as a perfect accompaniment. If you are looking for a delicious, authentic Asian experience in SF, this is the right place.

Breakfast and lunch were an easy choice with The Plant in the building. A great selection of organic juices and smoothies, as well as manual drip coffee, a concept I have not seen in NY, used to achieve the perfect brew.  Same place for lunch, a veggie burger to die for (the bun was red!).  I had one with melted cheese and mushrooms and another with wasabi Aioli. I also ate a tasty red Thai curry veggies with coconut rice.
In my hunt for sardines, I climbed a mountain, actually a Russian Hill to Pesce. Should I take a trolley? Neh. I climb like a local, even the roads have marks so you don’t slip. Note to self, stay at the Fairmont next time. That’s where the Detroit Tigers World Series delegation is staying. Grace cathedral down the block, they do yoga in there!! An hour an a half later, I finally arrived at Pesce, serving Venetian Cicchetti.  The chef is from Venice. I’m definitely the only tourist in a mile radius excluding those traveling on the trolley.  I picture the entire Tanner family from the show Full House eating here.  immediately sat at the bar and Ordered the Grilled Sardines!, squid ink risotto with Calamari, and one of my new favorite vegetables, the brussels sprouts.  First bite of sardines…delicious, no bones.  This is the kind of place I want to visit once a week. Then burned it all off by walking more steep hills and took a trolley downhill for an exhilarating ride.  Next stop, Venice. 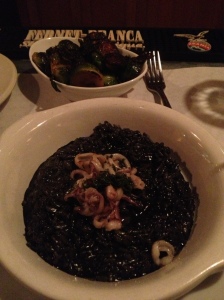 On my last night I chose to explore a different side of the city that most tourists don’t dare to visit, the Mission District, better known as “the Mission.” You can consider it a hipster neighborhood similar to the Lower East Side with a rich history of immigrants from Germany, Ireland and more recently Mexico. Walking through the neighborhood, I saw pot smoking bums, hipsters, Punks – a thriving subculture there, packed tattoo parlors, and churches with Mexican mariachi bands, as well as Mexican, Honduran, Salvadoran and Guatemalan restaurants. I passed a famous french Michelin two star rated restaurant called Saison. There are over 350 restaurants in the Mission alone. I arrived at my destination, Gracias Madre, a Mexican restaurant famous for its unique, fresh vegan cuisine. From the first taste of their home-brewed ginger ale and bite the Appetizer, butternut squash and caramelized onions folded into tortillas with cashew nacho cheese and pumpkin seed salsa, I can tell that they emphasize healthy, organic, fresh local ingredients and flavors.  For main course I continued a squash theme with a delicious Roasted poblano chile stuffed with butternut squash and caramelized onions, topped with pecan cream sauce and pomegranate seeds, served with black beans, rice, and tortilla with side of zucchini. Also ordered a cashew version of Flan, which turned out more delicious than regular Flan.  In my opinion, this is one of the best vegan restaurants in the world.
0.000000 0.000000
Categories: New York City | Tags: Burmese, Grub Street Food Festival, Mexican, Oysters, San Francisco, San Francisco restaurants, Travel, Vegan | 1 Comment