Martina is a Game Changer 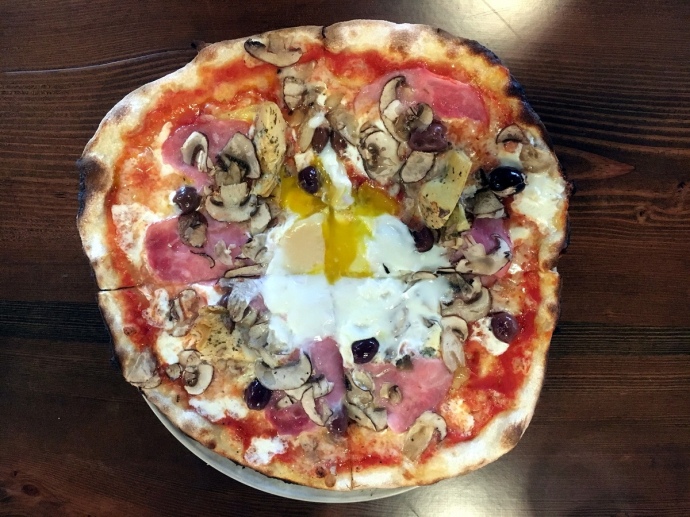 Its a girl!  Marta, the NoMad Roman powerhouse, and a staple of the Z-List, gave birth to 10 inch, 2 lb, Martina.  Proud papa Nick Anderer resumes the quest for a full Roman invasion of NYC.  While he has plenty of Roman competition these days, Anderer is clearly the main man when it comes to the Roman stuff with his M&M’s (Maiailino, Marta, Martina).  All part of Danny Meyer’s Union Square Hospitality group, and the person that gave us Shake Shack.

Sometimes I write about a place that makes me pause and ask myself if I really want to spread the word on this one.  Its called PTCS, Pure Thai Cookhouse Syndrome.  When I was working in Hell’s Kitchen, in order to eat at Pure, we had to sneak out at exactly 12.5 minutes before noon, in order to get a table.  Four times a year I would have unannounced drills, just to make sure everyone is on their game.  Sharing is Caring is something my parents never taught me really.  It was more like Sharing or I’m Coming Over with a Belt.  I’m sharing alright, but this is the one place I will frequent often by all looks and tastes, so I would like to be able to come whenever I feel like.

But Martina is far removed from the tourist zones of Times Square, High Line and Little Fake Italy.  Its all part of the joys of eating in East Village where 90% of the tourists are at Mcsorleys, 5% are trying to locate Mcsorleys, while the rest are lost trying to figure out under Guinness influence how to get back to Times Square from Mcsorleys.  Another advantage to Martina that you dont see much these days is that they open at 11 am.  Even if you add the 6 hours to accommodate for the time difference, similar pizzerie in Rome are still closed (Most open at 8)

So why is baby Marta a Game Changer?  Because we dont really have anything like it in the pizza capital.  Every week or so it seems we have a new $17 Neapolitan or NY or Detroit style opening but there’s really nothing out there like Martina.  The pies are just about the same size as a Neapolitan but they are flatter all around and much cheaper ($7-$12).  Anderer essentially created a new category.  The idea was to make a more affordable version of Marta in a fast-casual environment.  Yes, I said “fast-casual”, like the big boys

Since Martina opened a month ago, I’ve essentially become their Mashgiach (Kosher inspector).  I go every now and then to check the progress, while eating some of the best new pizza in town.  In the efficient gas oven at Martina the crust loses some of the Marta crispiness but its not such a bad thing.  The thin crust retains a pleasant chew that feels more balanced.  Anderer created a pizza lineup that include Roman classics like Quattro Formaggi with tomato sauce and arugula (most NY Quattro Formaggi are white), and a Capriocciosa (artichokes, ham, mushrooms, black olives, mozzarella & egg).  Both of which he learned from his extensive Roman training.  It also includes playful combinations like Brussels Sprouts Cacio e Pepe, and a Diavola with pickled hot peppers.  It might be the lightest, most perfectly sized individual pie in NYC today, especially once you factor in the price

And if you are a Marta fan, you’ll be glad to see Suppli and meatballs on the menu among other starters and salads.  And not to mention a proper finisher like the Fior di Latte ice cream with your choice of chocolate-amaro sauce, candied hazelnuts, olive oil, and sea salt. Ready, set, Go! 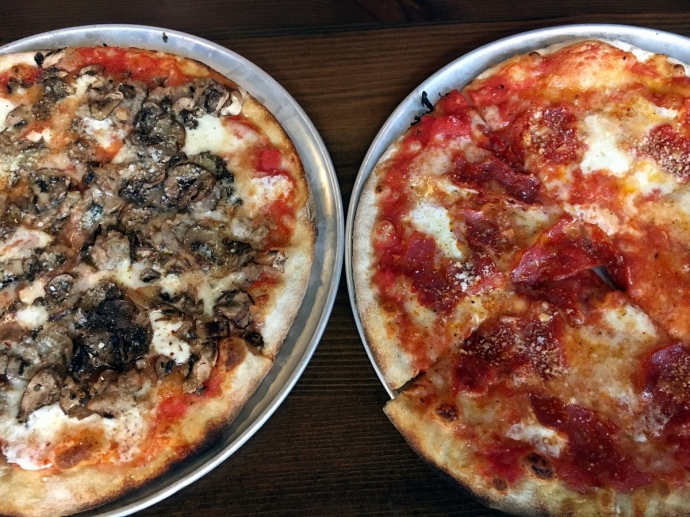