FOB – You Had Me at Halo Halo

How is this place not packed every night.  Yet another great feast at FOB, this time with the family.  The chicken wings, overnight Chicken Adobo (with coconut milk this time), Fish Inihaw are absolute musts.  But there are a few other potential gems on the menu we didnt get to sample yet.  The type of neighborhood place every neighborhood should have.  But dont take it too literally chef Armando.  I like you in just that one place

If you close one eye and both ears, Brooklyn’s Smith Street during the holidays feels like a small town Main Street.  Xmas tree vendors hugging corners.  Colorful shops, bars, restaurants getting dressed for the holidays.  You can almost hear George Michael’s Last Christmas before the moment interrupted by a commuter.  A commuter who believes if he beeps long enough, Santa will come down to part the sea, before heading for some Sisig and a beer.

Homey Filipino F.O.B. is the latest to join the happy Smith Street Mishpucha.  And by the look of the Xmas tree dominated glassy front, it’s playing the part.  When you sit down, you immediately get the sense that if you drop your napkin, you may just have to pick it up yourself.  And that any service mishaps will be treated just like you would at a diner (Though some Yelpers clearly had other expectations from a two week old establishment).  The room is simply decorated, and the lighting is an Instagrammer wet dream.  In other words, my type of place.

But I didnt come here for the tree, nor the home away from home family atmosphere.  I came for what looked and sounded like a promising menu by a Daniel alum, a menu that is lacking in that part of Brooklyn.  My extent of the cuisine stretches from visits to Lumpia Shack in West Village and recent visits to Maharlika in East Village where the Sisig became my go to dish.  The Sisig at FOB (which of course means Fresh off the {Ikea} Boat.  Thats the closest boat to the establishment I can think of) didnt sound too promising to my dining partner so we left it for another day.  Oh and did I mention that this meal was one of the best meals I’ve had in 2016?  Perhaps it would have been fair to start with that comment before losing 65% of my audience.

Corn Bibingka – A Fine semi-sweet Starter.  Rice cake with a nice layer of coconut butter that tastes like cornbread.  Reminded me of some Sweet Thai desserts like in Pure Thai Cookhouse, also cooked in Banana leaf.

Spicy Chicken Langkawas – These were quite good.  The wings are grilled, so not much of a crunch in the skin.  But the flavor is there thanks to the wonderful thick salsa of chilies, lime, and coconut milk.  The waiter learned the hard way that any sauce left on the plate is as if any chicken left. 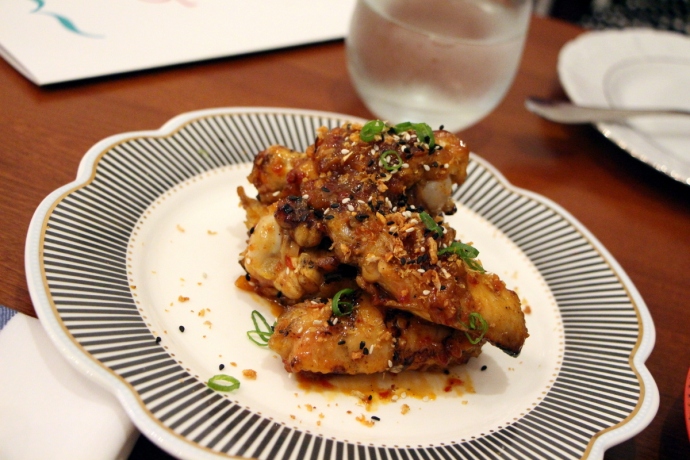 Peel & Eat 7-up Shrimp – The most enticing app was the most disappointing.  Some of the shrimp were limp and the sauce just didnt offer much.  I was hoping based on pictures for something closer to New Orleans style buttery BBQ shrimp

Fish Inihaw – A strong candidate for dish of the night. Delicately cooked Flounder (fish varies based on market freshness) topped with an extremely complimentary salsa.  Better than a similar fish nearby at one Michelin La Vara.

Overnight Chicken Adobo – This was surprisingly excellent (explanation to follow).  Two perfectly sized moist and deeply flavorful pieces (half a bird).  There’s another chicken on the menu that is “moms” chicken while this Abobo is “pops”.  The difference if I understand correctly is that pop doesnt like coconut, so its essentially the same thing without the coconut.  Instincts suggest going with mom, but the Adobo is getting a little buzz, coupled with the fact that Mrs Z face turns into Robert de Niro when she tastes coconut (Its quite a funny sight) means we are getting the Adobo.

Sides of Garlic rice and green beans & Longanisa were fine.  Especially the Longanisa sausage which was like a delicious tease they can easily make an app from.  Better than the Longanisa at Maharlika which is a little too sweet for my buds.

Dessert – The traditional Filipino Halo Halo is bucket list worthy.  Not because its so amazing, but because its so different than anything out there.  After many attempts at Lumpia Shack where it takes the winter off, this was actually my very first.  While it didnt exactly knock my sucks off, I can see myself ordering it again.  The flan with caramel sauce on the other hand became boring after a few spoons.  Still, a solid 3 Z’s meal in Brooklyn. 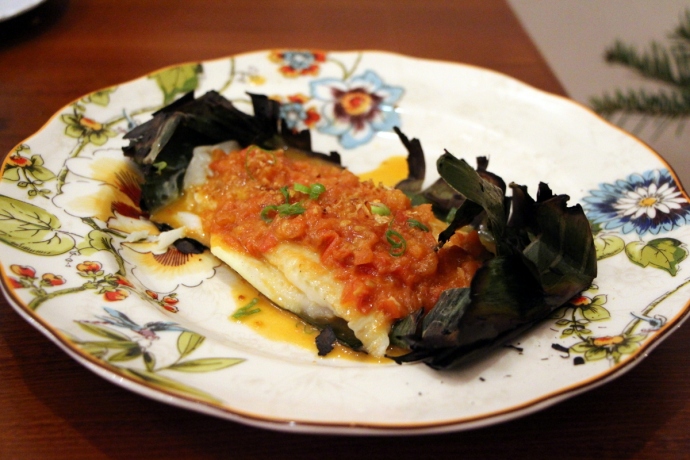 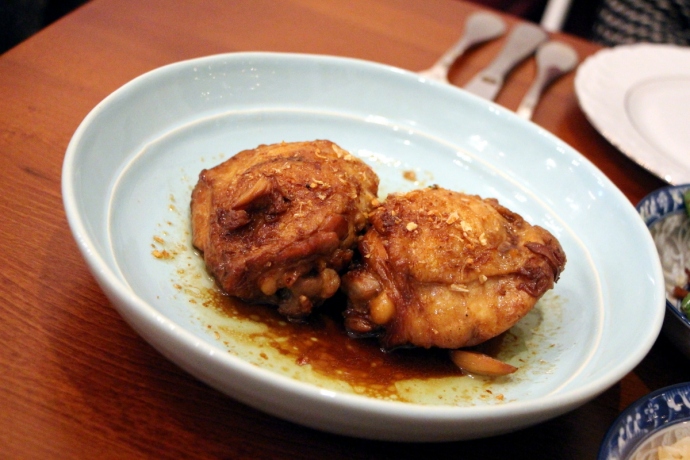