One of the joys of travel to me, not so much to others, is the time spent researching the destination.  Reading food blogs, online magazines, finding those obscure dining spots, stores, attractions.  That new gelato shop that was just opened by a master ice cream maker and not quite on the tourist trail yet.  All part of the fun.  Other travelers we talk to derive no pleasure out of this.  And for some of them, the research process can be a painful chore, like folding laundry, or changing diapers.  Grandpas diapers.  The one thing I learned however over the years is that staying flexible and going with the flow is equally as important.  And no matter how much research you do, you may somehow bump into a Macallè, a place that makes you look silly, with all that research dimmed just about useless.

Researching Sicily is more challenging than mainland Italy due to lack of information out there.  Tourism in general is a fairly new concept for Sicilians, and Italians visiting Sicily.  Its like mainland Italy 20 years ago.  There are practically no food blogs written by locals.  To find the right places you need to make local friends quickly, and in the case of Macallè, friends in high places.  After our tour of the market with chef Lele, I was essentially at his disposal.  First stop was Pani_Co for some local beer tasting, followed by dinner at Macallè where Lele consults.

Macallè, just like 99% of the restaurants we visited in Sicily, is a family affair.  Chef Maurizio, Margherita, and son run a tight ship in a corner of Ortigia not too frequented by tourists.  I didnt think its possible on this island but you may not see one tourist walking by in this corner unless he’s lost and trying desperately to get back.  When I asked Maurizio how a visitor like me would find this place without the help of a Lele, he said I would need to stay in one of the few area hotels that recommends it.  This is the definition of “Hidden Gem”.  And while the place gets generally high praise on Trip Advisor, the TA algorithm that takes into account the quantity of reviews, ranks Macallè fairly low as of this writing.  In Sicily, more than anywhere else, Trip Advisor is king.  Because there’s not much else.

Chef Maurizio created a playful, whimsical take on Sicilian cuisine.  He’s very proud and passionate about his ingredients, and in Slow Food style explains where this and that came from and why.  The menu options include a “Leave it to Macallè” 30 euro 4 courser which we took advantage of, and a la carte items like the sensational chicken.  You will be hard pressed to find a juicier, more flavor packed bird.  It was so good we ordered it twice, something as rare as the Olympics.  Buttery swordfish, pistachio bruschetta with raw Gambero Rosso (red shrimp) from Mazara and white scampi set the tone nicely early on.  Clams with mussels, gnocchi in a delicious clear broth.  After several meals on the island, I realize that Mussels is the one must eat especially in the summer.  That saltiness and flavor stays with you hours later even at the most inappropriate times!  Marinated Squid cooked in three stages, sitting on top of a small hockey puck of mashed potato shows the attention to details here.  Perfectly sautéed tuna on a bed of delicious peppers with sweet sautéed onions.  To make peppers taste this good requires some work and a lot of love.  The kids enjoyed their own Bruschetta (same as ours), the magnificent chicken, and Tagliolini with shrimp and shrimp broth.  Easily our favorite meal in Ortigia. 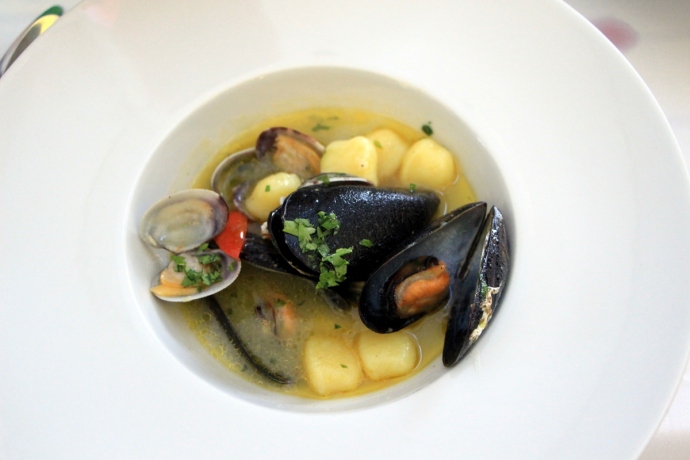 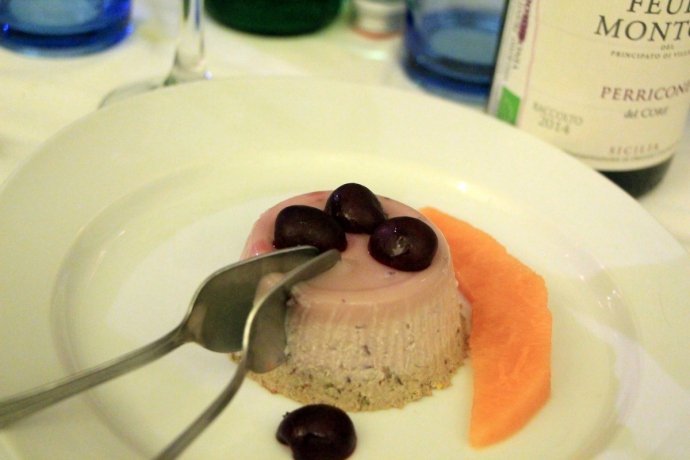