Even my Google Maps app was in a confused state as my taxi raced through traffic, seemingly going the wrong way.  Our female driver just smiled and said “Welcome to Palermo”.  The only time she slowed down was when we passed Giovanni Falcone’s monument for me to take a quick picture.  The site of perhaps the most famous mafia assassination in history, which changed Palermo forever.  Falcone’s friend and fellow judge Paolo Borsellino who spoke at the funeral, was killed in similar fashion 57 days after his friend’s death.  The airport is named after both heroes.

Palermo is misunderstood.  Just like most of Sicily pretty much.  Its old, its gritty, its congested, and its old!  The same can be said to much of metropolitan Europa, but it feels different here.  Emphasis on different, which is essentially why we travel.  This blogger compares it to India, and I can understand why.  Strangely, some of my favorite moments in Palermo came from the times when my daughters were slightly terrified.  Like when we witnessed the scene at Mercato Vucciria at night – an intestine, seafood, clubby, smoky BBQ extravaganza.  A scene we only see in movies, never in Italy.  Different!  Like our neighbor restaurant Il Pipino Rosso (the red penis) and its slightly disturbing logo.  This heat made me only imagine that when the Pipino committee met to discuss the name, someone showed up with a horrific heat rash. 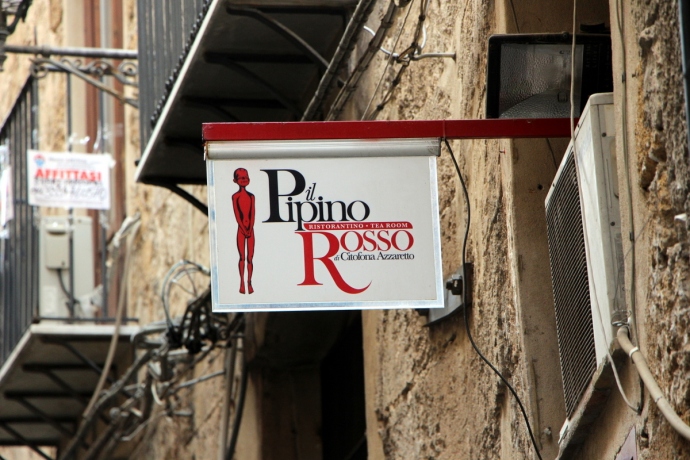 On this post, I will touch on some of the obvious (markets, churches), and some of the not so (fountain, dog droppings, red penises, etc).  You probably already heard about Palermo’s legendary street food and market scene.  Panelle, the Sicilian falafel, alone with a drizzle of lemon, or as a sandwich (Pane E Panelle), or with fried potato croquettes (Pane E Panelle Con Croquette Di Patate) quickly became our snack of choice.  It sounds and looks bland, but yet another example of “Dont judge a food by its cover”.  It also holds true for peaches.  The uglier the better, while the most beautiful often come without substance (AKA The Paris Hilton syndrome).

The Sicilian peaches in July are outrageously aromatic and sweet.  At the bustling Capo market while I was busy admiring the fishy creatures from Mazara for too long, my family would simply hold a peach 5 meters out to the direction of where I’m supposed to go.  But just like with the Oritgia Market, one needs to spend some quality time (alone preferred) with the Rialto-like seafood displays.  Make sure to come to Capo early, Ballaro before 13:00, and Vucciria at night for the party.  If you’ve seen markets and “shuks” like in Israel and Barcelona, these markets may not exactly shock, but interesting nonetheless. 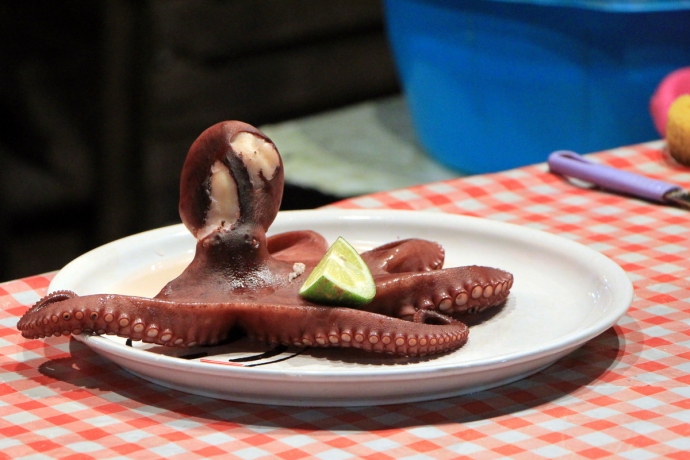 The usual suspects in Palermo… the magnificent, jaw dropping, slap your sister Cathedral.  The awe inspiring, splendid, slap your other sister Cappella Palatina.  And the only in Palermo, elegant Oratorios, are reasons enough to spend a few days.  The recently Unescoed Cefalu and Monreale nearby means make it 4 days.  You will pass by the cathedral a few times, and get mesmerized by its majestic magnificence as if you are seeing it for the very first time each and every time.. staring, admiring, selfying… until you step on dog poop.

Do not despair.  The Palermian dog poop, perhaps due to the seafood and Panelle diet doesn’t smell too harsh.  Think 3 week old asparagus meets Bengay.  Pick a nice looking square with pretty cobble stones and a place to rest.  Chance are there’s some water on the ground there.  Have someone in your family pick up little spoons off the ground, the spoons used for granitas and ice crea, they are everywhere.  Gently remove the poop with the spoons.  Use that bottle of water you are carrying if you have to.  The square may have a different meaning to you when you next pass by as it loses its charm a bit, but thats the small price you pay

The summer heat also means discovering things you may otherwise overlook.  Like the Orto Botanico di Palermo with its ancient trees (including oldest in Europe), and Zucchini shape trees (Maybe I was just hungry).  Its location near the train station also means discovering the Palermo Chinese wholesale district, just in case you need to buy handheld fans for 100 of your closest friends.  You can also cool off at the Fontana Pretoria, where up close it transforms into one of the most photogenic fountains in Italy.  There’s even a “Costanza Pose”.  When I posed in similar fashion on one of the fountain steps, Mrs Z said a policeman watching from the corner whistled to get off.  Or was he just admiring?  We’ll never know.

Our entire Sicilian schedule centered around one particular event, the Santa Rosalia Festino.  This is arguably Sicily’s biggest festival, with concerts, fireworks, races, and various parades throughout the week.  And the grand finale, July 14, where the entire town, and 1000’s of tourists come out to see Rosalia slowly parade down Vittorio Emanuele.  The energy, the anticipation, the emotion was heart felt.  I hope my rabbi will understand

When you take a close look at the history of Palermo, it may seem like everyone and their mother invaded Palermo at some point.  Arab influence is more evident here than anywhere else especially when it comes to the wonderful cuisine.  They brought in the citrus fruits, raisins, fennel, sugar, and introduced the Arab “Shuks” (markets).  You may see some sort of an Arab influence in almost every dish in Palermo and elsewhere.

At Ferro Di Cavallo we started our Panelle relationship, and enjoyed Spaghetti with seafood and a fine spaghetti with squid ink, among other less memorable dishes.

The father and son team of A’Cuncuma dazzled us with colorful flavors, while mom was home with fever.  This is Haute Palermo, a playful homage to Palermo classics.  We enjoyed more raw Gamberoni, and fresh fish which we couldnt get enough of in Sicily.  A duller, lighter version of Pasta Con la Sarde was missing its oomph, but everything else worked ].  In particular, the perfectly cooked Fassone beef from Piedmont.  You can’t get this stuff in NYC.   The closest is Fassone-like cattle from Montana

Turns out there’s also good pizza in Palermo, like at Ciccio Passami l’Olio.  Unlike the rest of Sicily’s notables, here its a lighter, airier fare with cleverly assembled ingredients.  Out of the three we tasted, the mortadella with pistachio, tomato and various cheeses stood out.  Our favorite Pizza in sicily

But our favorite meal in Palermo came courtesy of La Cambusa. Originally recommended by a trusted waitress from Mercato (NYC) who grew up in Palermo.  Being in the center, it does attracts a fair number of tourists, and evidently… clowns.  A misunderstanding led to double the house white we wanted (bigger than a bottle) which turned out to be a fun challenge.  The previous day in Trapani I ordered a fish sandwich instead of peach juice in a cafe, but my Menu Italian is getting better.  As a result of all the drinking, I was desperately trying to avoid eye contact with the clown.  Pasta con le Sarde here was outstanding.  Same dish featured in the last Travel and Leisure issue (as of this writing).  The raisins, fennel, breadcrumbs, pine nuts, sardines resulted in this sweet richness we’ve never tasted in pasta before.  Vongole was one of the better Vongoles of a Vongole filled trip.  Rabbit loin was tender and juicy, but the branzino baked with potato stole the show among the secondis 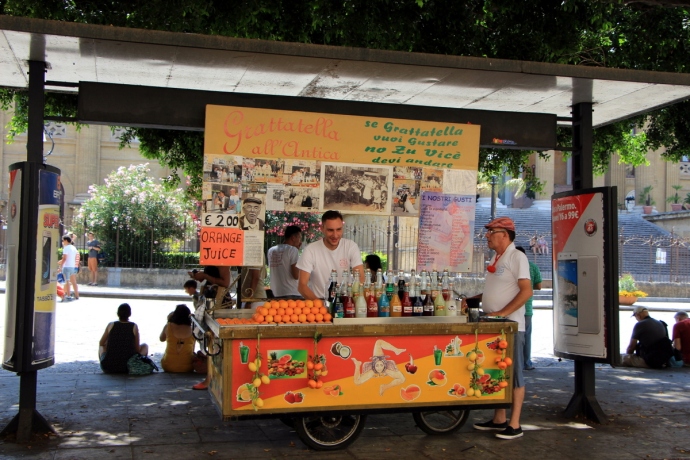 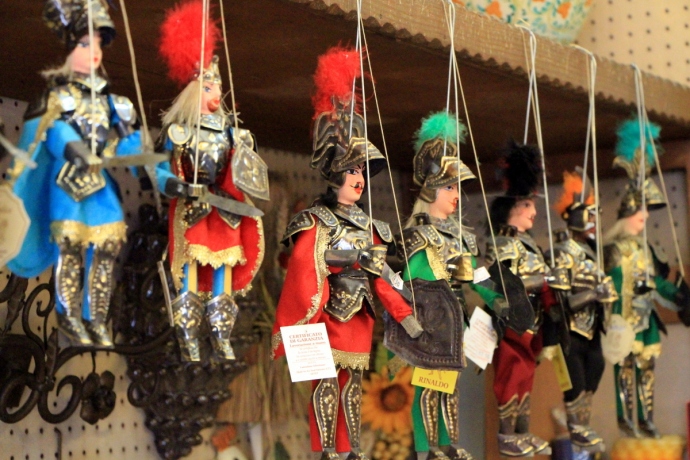 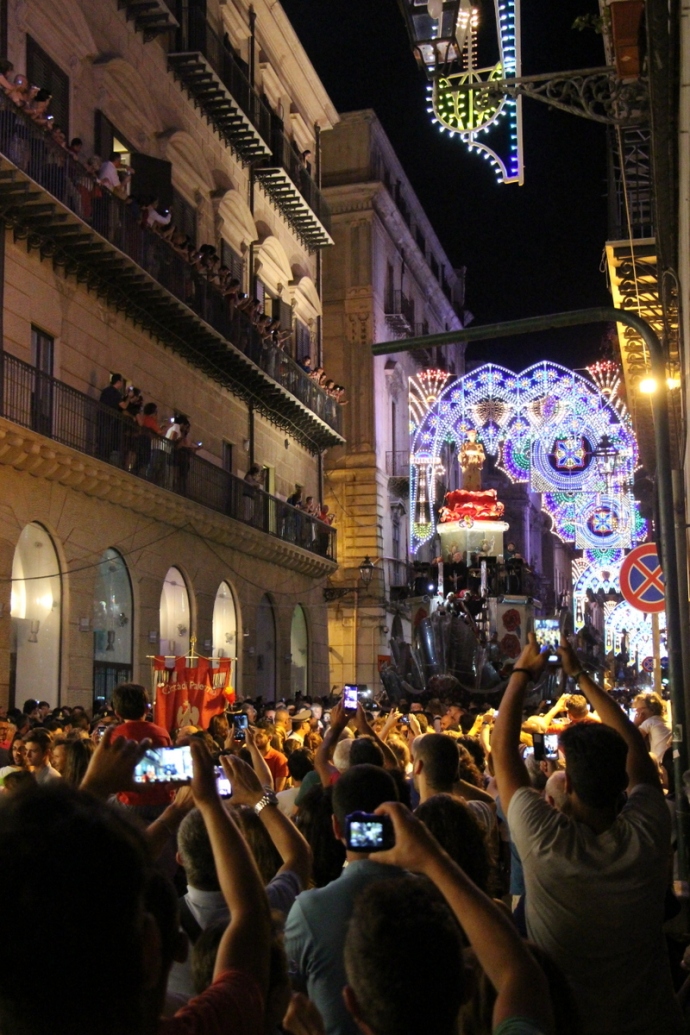 One thought on “This is Palermo”