November 20, 2016 Update:  Three months later, Tacuba of Hell’s Kitchen is clicking on all Chimichangas!  A big birthday bash for a close friend last night started with a sound concern, but ended with another fun meal.  If you go however, try to avoid Friday and Saturday nights if you can.  The word is apparently out (ahem!).  There were quite a few large groups there besides the usual turnout, and they can get busy.  Tacuba has all the red flags of places I usually avoid.  Younger crowd, loud, overzealous vibe sometimes.  But the touch of Julian Medina (who I finally met last night) of Toloache fame, gives it this nice balance of food and energy you cant get out of Mexican in Hell’s Kitchen.  Nothing new to report food wise.  Stick to the Carnitas, Pulpo and the rest of the appetizers.  And the drinks here are quite good.

August 7, 2016 Post:  To open a Mexican restaurant in Hell’s Kitchen these days requires some major Chalupas.  I need to double check with the EWZ stats department but its entirely possible that Mexican is more represented in the Kitchen of Hell than Thai these days.  The last couple of years saw Taquerias, Tex-Mex, and all sorts of various sit-downs flood the area.  All while old fashioned Mexican bodegas forced to close or transform themselves.  So forgive me when I say this, but when I saw yet another Mexican being developed on 9th between 54/53, I said the same thing when they replaced Little Chef with Choza at Gotham West Market.  We need another Mexican here like I needed Shingles

Then I find out this is another place from Julian Medina, of Toloache fame.  That intrigued me enough to stop wishing for shingles, but not quite enough to make it a priority (sorry Medina).  But I needed to try it for myself eventually.  Oh and by the way did I mention that spot is cursed?  It saw a bunch of places come and go, whose names no one can recall.  The only memorable thing about this location saw one of my co-workers get slapped by a former CEO when it was an Italian joint.  It was a playful slap, but a slap to the face nonetheless.

But the reason that intrigued me wasnt Medina (sorry again Julian, I owe you a drink), but the fact that with all the Mexican we have in Hell’s Kitchen, I was never truly comfortable recommending any of them to visitors looking for a “Mexican restaurant”.  They are all either too authentic, too taqueria, too hole in the wallish, too tex-mex, too chilish, or just simply too suck.  I couldnt think of one spot, but I think that’s about to change.  There’s this new place opening soon on 10th promising to make Mission style… just kidding Medina (make it a pitcher).  I think Tacuba may very well be it.

Talking about Mission, the dish that is simply called Carnitas at Tacuba has that Mission District slow roasted nastiness.  It comes with Chicharron (Cracklings), four little tortillas for you to master your taco skills, but thats not all… A beautiful, tangy tamarind habanero salsa that will make you want to dip you car keys into.  You may also want to add some sides to go along like the rice and beans, and the unique Avocado Fries.  But dont overlook the terrific Sweet Plantains.

The one thing I love about Tacuba is its short, to the point menu.  Other than the good looking Ceviche section, they only have about 5 appetizers, which they seem to master.  The Guacamole is thick and proper, with chile serrano giving it a little kick.  The Zucchini Flower Quesadilla with Burrata, Manchego and kale pesto tastes much better than it sounds.  Good luck finding this in your neighborhood Cantina.  But the one must eat here for both lunch and dinner is Octopus.  For lunch you got a Torta featuring Chorizo, Octopus, and Chipotle Butter.  And for dinner (and lunch) Octopus comes on a toasty Tostada with chipotle butter and mezcal.  Carnitas Burrito at lunch time is well done as well, other than the accompanying fries that can use some work – I suggested rosemary and garlic chips or something to oomph them up.  No Complaints on the desserts and drinks side either.  Go! 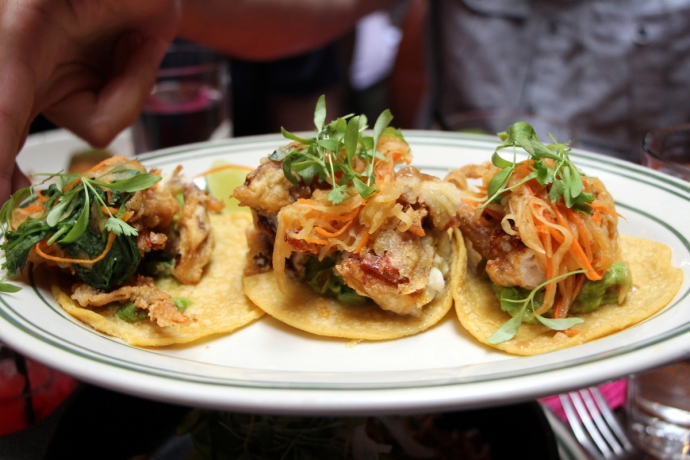