I’m starting to get the hang of this.  Rediscovering the borough of Queens.  My friend Howard moving to Jackson Heights was just the excuse I didnt know I needed.  It really feels like a different world out there.  Or 160 different worlds to be exact.  From the price, warm hospitality, to dishes I’ve never heard of.  Its a foodie wonderland.  Highlights so far include a standout crab Ramen at the new Japan Corner, a grocery store in Woodside hosting rotating chefs from Japan.  And Thai Cook at iCook, or “iCook Thai Cook” according to Google, sort of a restaurant within a restaurant.  I’ve been plotting a return trip to that one ever since.

Last week I met a group of Chowhounds at Tito Rad’s, a Filipino grill I’ve wanted to try for a long time.  Filipino food seems to have grown exponentially over the last 20 years in NYC.  I must have had 20 different variations of Sisig during that time (with about half coming from the excellent Mama Fina in East Village).  But in the underground foodie community it seems pretty clear that as far as old school Filipino comfort food goes, Tito Rad’s Grill is the Mothership.  Or the Grandmaship if you will according to their site.

Since 2006 TRG has been serving the community from a seemingly strange looking location, at least when you approach it.  In that corner of Queens Blvd, you might expect to find a place that can renew your license before finding some of the best Filipino food in the city.  Its right next to a Calvary cemetery that has more graves (3 million) than the entire population of Queens.  I dare you to find a food blog that also gives you up to the minute cemetery stats.  Go ahead, I’m waiting.

Considering I eat mostly in Manhattan, I’m all inspired to include prices here, like other successful bloggers.  The Sizzling Sisig ($12) oddly listed as an appetizer here is outstanding.  Its chunkier, not as crispy, and milder than most Sisigs I’ve had, but still perfect in a way.  Another winner early on was the Tokwa’t Baboy ($9), deep fried bean curds (Tofu) with braised pork ears.  It worked better for me than the one-note fresh (not fried) Lumpia.

I though I was back in Prague when we got the Crispy Pata ($14), pork knuckles deep fried to extreme but manageable crispiness.  I found myself reaching for this more than one of their signatures, Inihaw na Panga, grilled tuna jaw.  Good flavor, but slightly off-putting funky aroma prevented me from fully enjoying this.  It comes in s,m,l sizes, but for us, and for me especially, small was plenty.  We were pleasantly surprised however by the Pancit Bam-I ($9), sautéed egg and rice noodles with vegetables, pork, shrimp and Chinese sausage.  Delightfully salty and pungent. 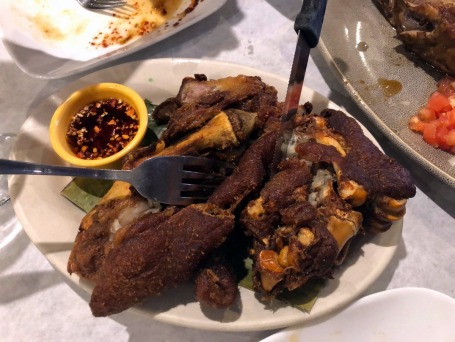 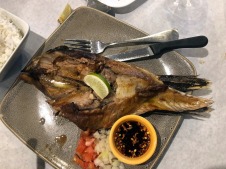