Posts Tagged With: Simon & The Whale

Simon & The Whale – Not your Grandpas Hotel Dining

While we were dining at Simon & The Whale the other day, we noticed something thats becoming less and less peculiar these days.  We were the oldest people in the room by what looked like quite the margin.  That includes the wait staff.  Our waiter could have been the son I was never given (even though he confused Dorade for a Sea bass, something my son would never ever do).  But didnt all these kids get the memo that hotel restaurants are horrible tourist traps?  They may not have lived long enough when it actually was.  In NYC at least.

And so where is the “mature” hanging out these days anyway?  We were also the oldest at Broken Shaker, the rooftop bar at the same hotel (Freehand).  Some kind Millennials asked us if we were lost and offered help.  Did the entire Generation X move to Staten Island?  Oh never mind.  Found them in the Upper East Side.  But are we getting closer to Young Pro City that just got accelerated with the introduction of Hudson Yards.  I’m a soon to be 49, middle aged professional.  Where do I belong?

But these days, hotel dining in NYC is not only perfectly acceptable, but trendy.  Just look at The NoMad, The William Vale, The Freehand, and any other hotel that begins with “The” these days.  They all offer a plethora of creative chef driven dining options.  And your ears perk a bit higher at the sound of “At [hotel name]” these days.  For example: “The Magician at Mikes Pub” vs “The Magician at The NoMad Hotel”.  There’s no question which magician I just have to see.  The competitive dining and real estate environment today means you can no longer afford to have a hotel restaurant that sucks.  Is that all good news? No, not really.  But let’s leave that for another gloomy day post.

Simon & The Whale along with The Studio and George Washington Bar at The Freehand is run by Happy Cooking Hospitality founded by Gabriel Stullman and his wife.  With the hotel launch, HCH essentially transformed into a dining empire, adding to a resume that includes Fedora, Bar Sardine, Joseph Leonard and other places I dont really frequent.  Matt Griffin, the Fedora and Bar Sardine chef, is now at the helm at Simon & The Whale, named I believe after Stullman’s son who likes to play with whales.  A practice we dont endorse here on EWZ.  Its a seafood focused New American menu.  Which really means fancy food that can not be called Italian or French.  Although it’s one or two pastas shy from Italian. 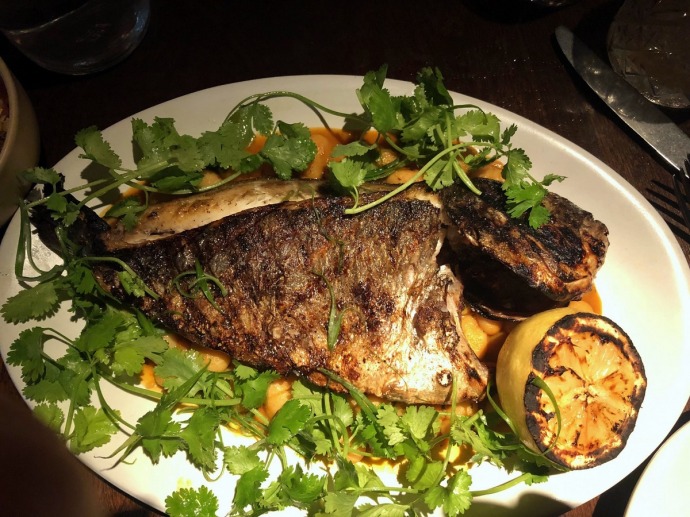 Black Bass Crudo – If I have to pick one dish, this might be it.  Mrs Z said the sauce reminded her of her childhood. A ratatouille moment if you will.  But I think she was just under a major Spritz  influence by that point.  It was just a nice spiced miso.  Along with the sliced radishes (daikon I believe) and the crunch of the puffed rice, this was a very pleasant bite

Smoked mussels – Fine but skippable. You fish them from a small jar and spread on wheat crackers.  Not overly flavorful or smoked.

Squid ink Tagliatelle – Very nice, albeit there’s really no squid ink mixed here as the name may suggest (to some).  Its simply black pasta (made with squid ink) mixed with fresh seafood, with a little heat.

Simon Burger – Had this on another visit and as expected just a solid burger from the team that got burger fame at Bar Sardine.  Well cooked meat, and top notch craftsmanship.  And the crunch from the crispy shallots tricking your brain to believe there’s an especially nice sear here. 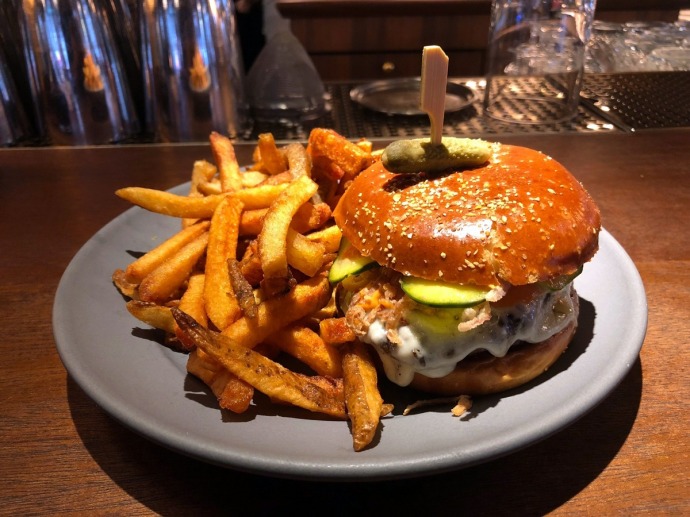 Whole Fish for Two – Expertly cooked Dorade.  For two really means for two in this case. Very often dishes for two can be for 3 or 4.  Served on top a thin, delicate Madras curry, and creamy white butter beans (fava).  Delicious but a bit overpriced at $60.

Cauliflower (side) – Listed as a side, but closer to an appetizer we sometimes see in middle eastern places.  Its good.

Almond Milk Panna Cotta – Possibly the best Panna Cotta I’ve had in NYC.  I find that chefs often mess around with Panna Cottas way too much, but this was just perfect.  The combination of the cream, tangerine, and the crunch from the caramelized cocoa nibs worked beautifully.

For drinks she enjoyed the Crazy Charlie, a Spritz-like with Mezcal and grapefruit. My Negroni was a little off but manageable.  The great wine list didnt have many glass options, but there was a rare Grillo (Sicilian white) sighting so I had to take advantage. This is a Go!