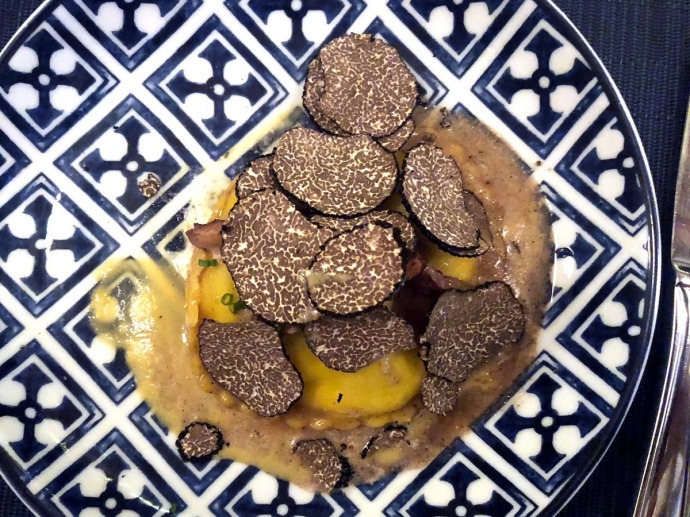 Did I ever tell you the story of my mysterious volume spike?  A few years ago, I looked at my site and noticed the number of page views suddenly skyrocketed.  Mainly due to the post on Hosteria Giusti in Modena I wrote a few years prior that suddenly went viral.  And there was no indication why.  There was no referral site like Trip Advisor or Facebook which was the culprit for similar spikes in the past, like the Top NOLA bites that went viral on Facebook.  It appeared that people were sent there from simply googling “Hosteria Giusti”.  But why so many Googling?

The answer came about four months later.  Heard of Netflix and Chill?  If not, and you are a parent, you may or may not want to Google it.  But in my house, its more like Netflix and Sleep, with almost zero chance of Chill.  One day we started watching Master of None, Season 2, set in, you guessed it, Modena, a sort of Foodie paradise in Emilia Romagna.  But it was only when Aziz Ansari celebrated his birthday in Hosteria Giusti, that little light in my head finally turned on.  The next morning I googled it, and sure enough, my story is on the first page.  The spike started the day the season was released.

“So what the fuck does all this have to do with Rezdora, Ziggy”.  Great question Timmy. I’m getting there.  And why so angry today?  Hosteria Giusti is a 400 year old deli in Modena that takes a stupendously long lunch break and transforms into one of the north’s toughest tables.  Unless you have the adorable looking face of an Aziz Ansari, reservations required many months in advance.  For me it was easy because I do happen to have the adorable face of an Aziz Ansari.  More like a cross between Aziz and Tom Branson from Downton Abbey.

Anywho, this requires some more investigating, but chef Stefano Secchi the owner of Rezdora, might have been at the helm at Giusti during our lunch.  Although he grew up in some Italian city called Dallas, Secchi got much of his inspiration at Giusti and Osteria Francescana, one of the only restaurants in the world where you book the restaurant first, and THEN book flights.  Rezdora is an homage, not only to Modena, arguably the best food city in Europe, but also to the Nonnas that make it happen.  Its not entirely clear to me if Rezdora means head of household or Grandma in Modenese dialect.  It depends on who you ask.  Maybe in Modena, the grandma is usually in charge.  Not so much in NYC.

While we have plenty of restaurants that call themselves North Italian, or offer cuisine from Emilia-Romagna, none are nearly as representative or daring as Rezdora.  This is Modena cooking.  There’s a certain level of Chutzpah required to introduce this level of authenticity by way of dishes that may seem odd to the natives.  Like a Raviolo, which by definition means one Ravioli (and its a good one).  New Yorkers may know Ravioli, but not Raviolo.  Still, this is the right city to do this.  You may not get the same results in Boise.

Reservations are tough to get as of now.  But we showed up a few minutes before opening (5) and were able to get sits at the bar on a Saturday night.  When we left two hours later, there were sits available.  The best thing I can say about the service, and any service, is the staff seemed happy, genuinely enjoying what they do.  Here’s the food rundown…

Cherry season in Vignola – Vignola is a town near Modena known for its intense cherries.  Here its paired with creamy Stracciatella and almonds.  It is meant to eat with bread that doesnt exist unless you order the Fett’unta, an oily, garlicky toast.  It paired well initially or at least until the garlic from the bread took over the mic.

Gnocco Fritto – This is a classic Modenese specialty of fried dough balloons that pop when you bite into.  The Gnoccos vary from town to town between Parma and Bologna, but this is pretty much what you get at Hosteria Giusti.  Each one is topped with either Prosciutto di Parma, Mortadella or Finocchiona.  If you are sharing and feeling selfish, go for the Mortadella.  If you are on a first date, go for the Prosciutto.  Then Mortadella.

Tagliolini al Ragu – If you ever had the ultra eggy Tajarin in Piedmont, or Tagliolini in ER, this is as close as it gets in NYC today.  Its an explosion of flavors.  What we call here Bolognese is essentially a poor attempt to mimic this, the original.

Cow grazing in Emilia Romagna – The names of some of the dishes alone show that Massimo Bottura influence.  This is pretty much what you expect from a sirloin in a high end restaurant.  Perfectly cooked quality beef with three delicate sauces.  The meat is so good on its own, you hesitate to try the sauces.  But they dont do any harm.  Mix and match for best results.

Chocolate Tart – This is were things just fell a little flat for me.  There was a Tiramisu and another dessert, but this one looked most interesting.  A not so inspiring dark choc tart with hazelnut mousse.

Poor lighting translated to some horrible iphone pictures this time, so borrowing some from Eater.  Read Eater!

Rezdora
27 E 20th St (Brwy/Park), Flatiron
Rating: 3 Z’s (out of 4)
Stars range from Good to Exceptional. Simple as that
Recommended Dishes: All of the above except dessert 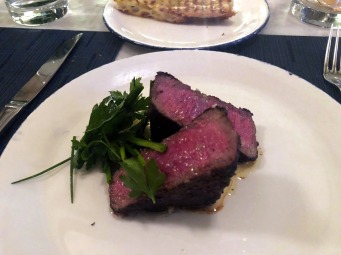 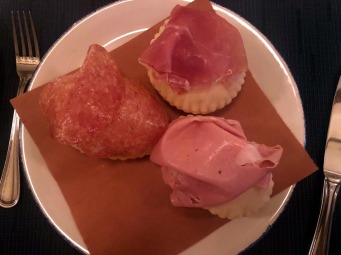