A Gentleman’s Guide to Pok Pok

Anthony Bourdain’s “Parts Unknown Thailand” with Andy Ricker is one of my favorite food episodes of all time.  It was real, it was fun, and it gives you a good size glimpse of what exactly is behind Ricker’s motivation… women!  Yes, food and the culture are probably high up there, but its probably the women that made the man move back and forth and back again for 20 years.  Even some of the servers at Pok Pok NY including the boys were a sharp reminder that you are at a Ricker establishment.  I vividly recall one particular moment from that episode where they visit a family run shack somewhere remotely, where Ricker starts flirting with a girl pretty much in front of her parents.  Now that is some Chutzpah.

The last time I was accused of being a gentleman was the last time we visited Turks and Caicos, where I kept opening the car door for Mrs Ziggy.  But that was because I can never get used to the location of the wheel and keep opening the wrong door.  At Pok Pok blvd in Red Hook Brooklyn, Mr and Mrs Hummus Whisperer and us got to open three different Pok Pok doors;  The Whiskey Soda Lounge while munching on the famous wings (the only item available from the flagship menu), Pok Pok NY (the flagship), and Pok Pok Phat Thai (Pk Pok light) just for the hell of it.  A fun meal overall, and vastly different than the 9th Ave Thai some of us are so used to.  Here’s the food rundown 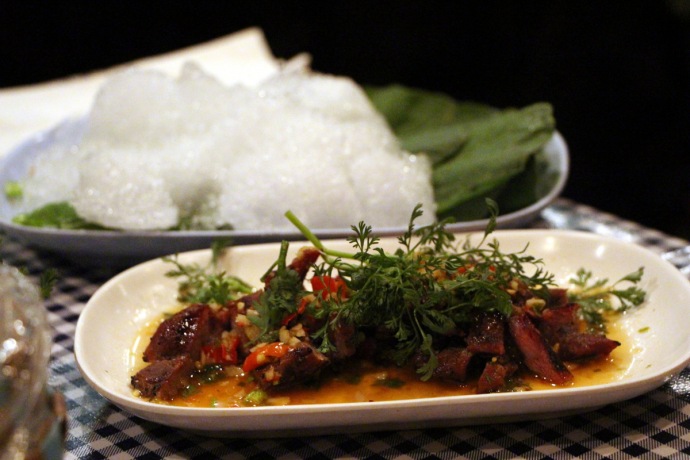 Ike’s Vietnamese Fish Sauce Wings.  I don’t know who this Ike guy is but I’m guessing he is a good guy, and an honest citizen, and probably a fantastic cook.  These are plus size Amish wings that are seasoned in such a way that you will contemplate not washing hands for a few days.

Het Paa Naam Tok – Spicy forest mushrooms with soy sauce, lime and chili powder dressing, shallots, lemongrass, mint, cilantro and toasted rice powder.  Perhaps the only dish I didn’t care much about.  Sounds exciting at first but the result was way too much acid for those delicate mushrooms.  Probably works better with meat

Muu Paa Kham Waan – Boar collar meat rubbed with garlic, coriander root and black pepper, glazed with soy and sugar.  Grilled over charcoal and served with chilled mustard greens and a spicy chili/lime/garlic sauce.  Even the slightly overcooked Boar didn’t stop it from being the dish of the night.  Its all in the sauce of gods that could even make your car keys eatable.  Fantastic dish! 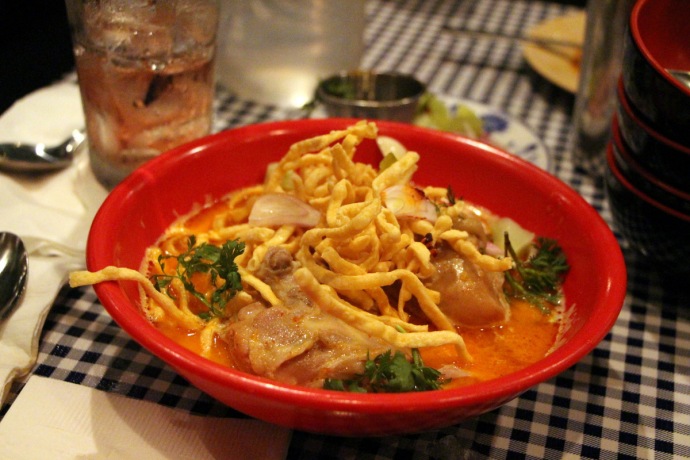 Khao Soi Kay – Northern thai mild curry noodle soup made with curry paste recipe and coconut milk, served with house pickles mustard greens.  A little trickier to share but Khao Soi as good as I ever had

Cha Ca “La Vong” – Vietnamese catfish (or as they call it in South Florida,  Grouper ;)) marinated in turmeric and sour sticky rice, fried in turmeric oil with scallions and dill, served on rice vermicelli with peanuts, mint, cilantro and mam nem.  One of my favorite dishes here and something I’ve had before.  Before you even take your first bite, the herbs aroma make their mark and tell the brain “this is gonna be exquisite”

Winged Bean Salad – This was a special.  Florida grown crunchy sliced Winged Bean pods mixed with prawns, pork and a hefty amount of Thai Chilies.  The spiciest dish of the night by far, and something I would definitely order again.

Dessert was as exciting as Thai desserts can get.  A not so smelly Durian scented creation on sticky rice with coconut milk.  Slightly less successful than the similar pumpkin at Pure Thai Cookhouse.  The Affogato was your good basic Affogato but with Churros-like doughnuts.  The lone clunker was the ice cream sandwich which didn’t work for any of us. 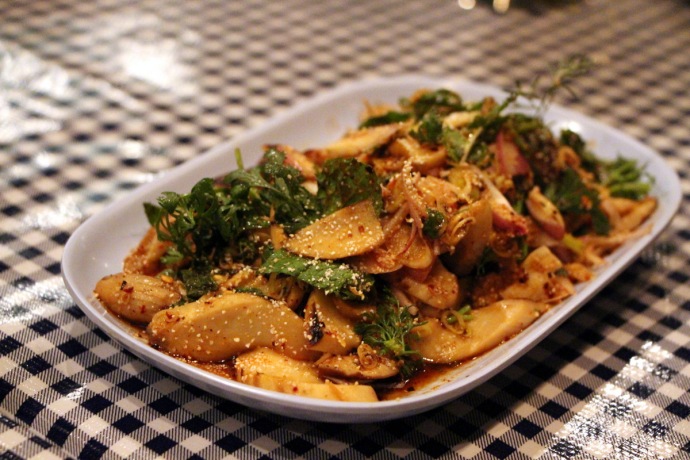