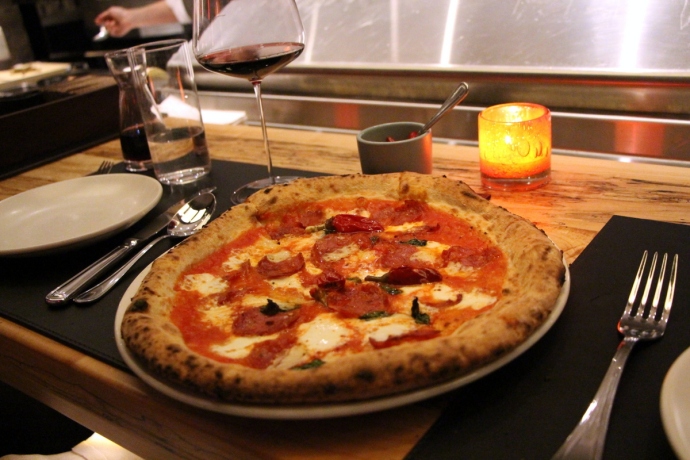 Its been 977 days since the last update but who’s counting.  Not me.  There’s an online date calculator out there in Google land.  I use it to sometimes to count days between vacations, colonoscopies, etc.  But there’s not much to report here really, except to remind you that PJ is awesome, albeit a bit more touristy these days.  It seems that the borders of Little Italy have expended and every time I’m here, I’m surrounded by savvy tourists.  The last time, we overheard from the next table… “according to my research this is one of the best Italian restaurants in NYC”.  That followed a “Dont you dare dad” by my oldest, which meant: please dont strike a conversation with them, we are having a nice family lunch, and you are like 0 for 40 (tourists we met who read the blog).  Ok, fine!

More tourists, in addition to more restaurants by the group (Legacy Records) can very easily lead to loss of focus, but I’m not seeing any evidence of that.  Pastas like the Tagliatelle with lamb (when they are out of rabbit), fennel, Pecorino, always solid.  Its an ever-changing pasta lineup.  The great Agnolotti or Guinea Hen Cappellacci with lobster mushrooms, that’s not really a mushroom, I had once, are long gone.

The pizzas are still fantastic but I cant make myself try something other than the Diavola or clam pie whenever I’m here.  The Braised Leeks have been on the menu since day one pretty much, and its indeed good.  And on the last visit, the proximity to Little Italy made us try the Veal and Ricotta meatballs which were exceptional, tho the family was not too keen on the too bitter accompanied Broccoli Rabe.  Still a go! 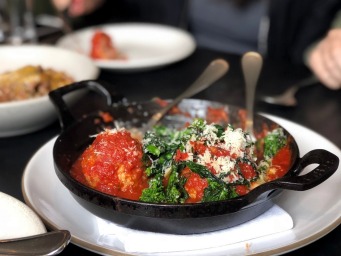 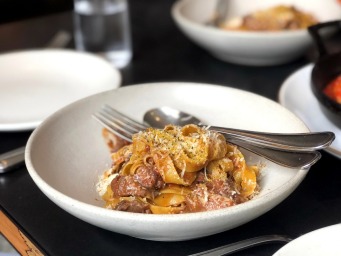 The great Pasquale Jones is now experimenting with a new concept.  They offer on weekends something called “Lunch”.  Yes, its not a typo… lunch on weekends!  No Mimosa, no French Toast, not even an eggs Benedict pizza.  Just lunch.  Last weekend after a quick egg sandwich and a Mimosa at home, I decided to check it out for myself and the results may shock you.

It was great!  Sure, I was dreaming of bacon and eggs on occasion, but a small price to pay when the pizza is this good.  And by pizza, I mean I’m essentially stuck with the Diavola and the now city wide famous LittleNeck Clam pie that is growing on me.  While I much preferred the spicy Diavola last time, the clam pie with a little drizzle of the accompanied Calabrian Chili is creamy and satisfying enough to continue ordering it. 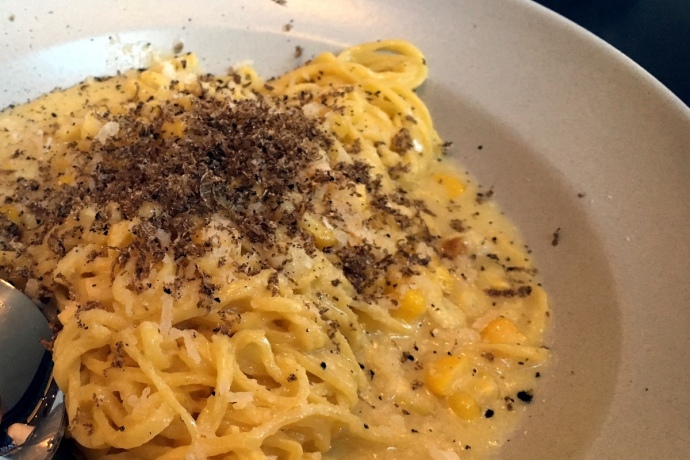 But I really come here for the pastas.  Hard to pass on the pizza especially when you bring new people here, but the pastas and the whole package is why I’m adding PJ to the Z-List on the next big update (as soon as this month).  What attracted me to this very experimental lunch was the Tajarin with corn and summer truffles.  Knowing that Tim Caspare who spent some time in Piedmont, knows how to handle those Piedmont(ish) classics.  Sweet pastas dont particularly sound very sexy to me, but this one may have changed that notion.  Rich, creamy, but at the same time very summery.  The “Mezze Rigatoni”, their slightly heavier version of the Cacio e Pepe was good as well.  And I’m still yet to have the Pork Shank for 2 (or 3) that everyone’s talking about

If you go for lunch (or dinner), check out the new soft serve and Poke window at Seamore’s next door.  They are serving now coconut lemongrass ice cream from Oddfellows which is fantastic.  And/or if its open, get the chocolate chip cookie and coffee at Maman.  Strong candidate for best cookie in NYC! 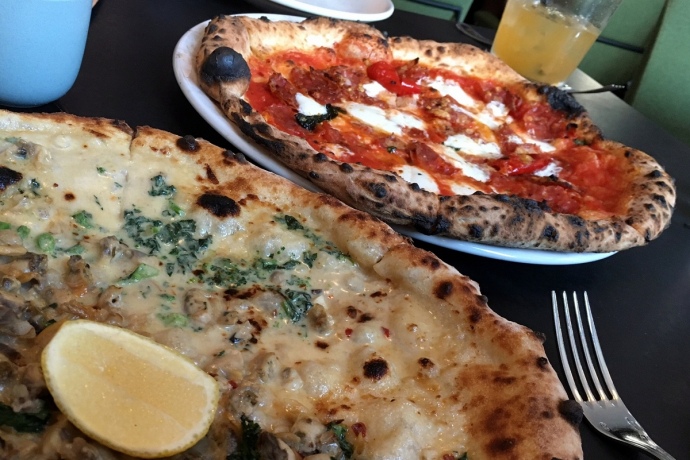 I rarely get them this young.  As tempting as it is to move up the food blog ladder, I prefer to wait for the growth and maturation that comes at the other guinea pigs expense.  After some time, they figure out where the holes are, what works, what doesnt, and suddenly the world is a better place.  This is one reason that one can not simply go by early opinions from first respondents who care only about being on that elusive first Google page (I’m looking at you Infatuation).  But sometimes, something jumps at you, and you feel a little anxious.  In this case it wasnt so much the team of Charlie Bird behind this thing, but the third wheel, a dude from Cotogna from San Francisco that got my attention

Cotogna was the mistake from last summer.  Instead of sticking to the initial plan, I substituted Cotogna with the very attractive Piedmont heavy menu of Perbacco.  The kind of menu sorely missing in NYC.  The result was a less than stellar meal that featured Piedmontese classics that deviated the wrong way from tradition.  Irony and Redemption came seven months later when Tim Caspare of Cotogna, now at Pasquale Jones, whips a perfectly executed Agnolotti dal Plin that would make any Langhe nonna blush. 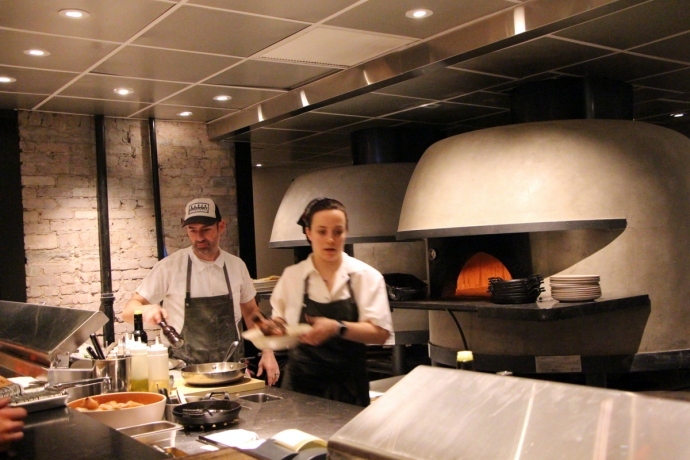 When she said “It will be around 90 minute”, Unlce Boons, Bar Goto started creeping into my head, as its about 85 minutes longer than I normally like to wait for a table in NYC.  But my dining partner, aka first wife, was still 60 minutes away.  And besides, I’m right by my favorite area in NYC… Little Italy!  By the way, a little free tip to restaurants out there:  When you say “It will be around 90 minute”, smiling is the wrong way of going about it when delivering the sad news.  While smiling is generally a good idea, and the #1 rule of fight club, this is not one of those moments.  Just like “your grandma died”, or “the vasectomy didnt go as expected sir”, dont underestimate the sadness of the news.  Smiling while saying it, makes you look like TAO

I wont keep you in suspense.  This was one of the best meals in recent memory (I started eating cashews religiously which extended “recent memory” to about a month).  Pasquale Jones is essentially a more comfortable, more ambitious, better pasta, slightly less creative Bruno Pizza.  The counter facing the action is the way to go, but you dont have choices here.  You get what becomes available.  Attention to detail starts with those super comfortable counter seats.  The ones you can lean back comfortably when you feel the need to unzip.  Reservations through Resy – Forget it.  Only about 20% are out there.  On to the food… 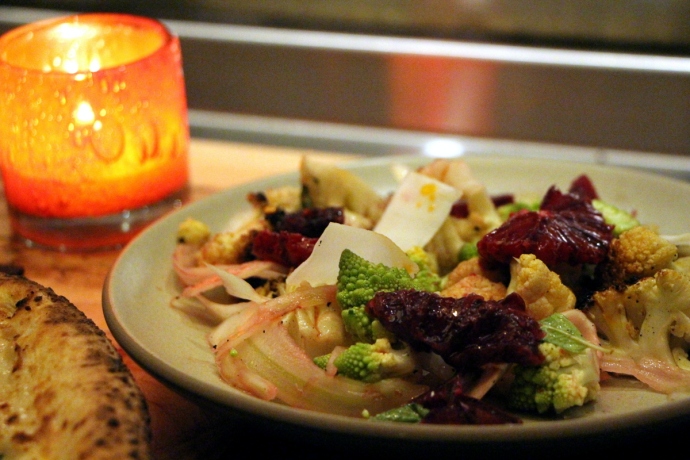 Charred Cauliflower – This is one those simple dishes where you get pretty much what you order.  Sure there was blood orange, and some heat to go along, but the star was simple cauliflower that was still raw enough to maintain that crunchy texture.  Although the dish was fine, I did have some serious small dish envy, like the Braised Leeks which looked like the sexiest grilled calamari.

Clam Pie – Good.  I get the sense that this is their early signature pie.  I’m not the biggest white pie lover unless its something like Marta’s Potato Carbonara where the ingredients talk back to you (I should probably see someone about this).  This is not one of those, but satisfying nonetheless.  Perfectly charred, chewy, flavorful dough. 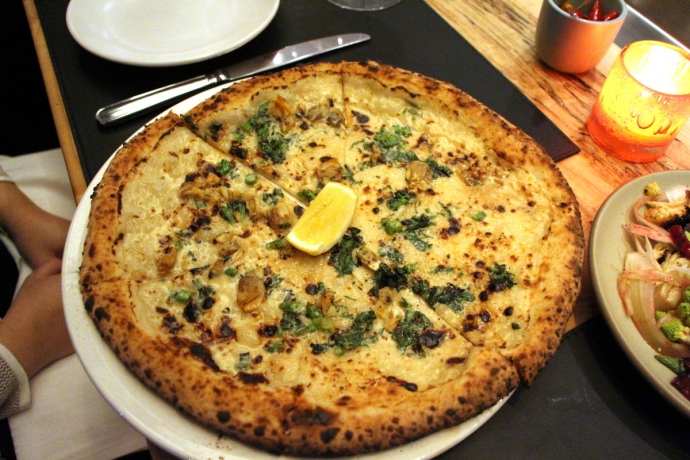 Diavola – More like it, but I’m more of a Diavola fan overall.  I wasnt about to order two pies but couldnt decide here.  A bit more heat than the average city Diavola.  Neapolitanish, very similar to Motorino which is a compliment.  Some may expect more refined pizza (a la Bruno) in a place like this, so its important to adjust those expectations.  Its about the total package.

Agnolotti – I already touched on this beautiful dish.  This is a good example of pasta that stays true to its origin, unlike the rest of the Agnolottis out there in town.  This is buttery, explosive, pillowy Agnolotti dal Plin packed with Guinea hen, sage and Pancetta.  PANCETTA!

Rigatoni – Another simple but very solid dish.  Perfectly cooked dry rigatoni, with sausage ragu carrying a nice depth.  Get this! 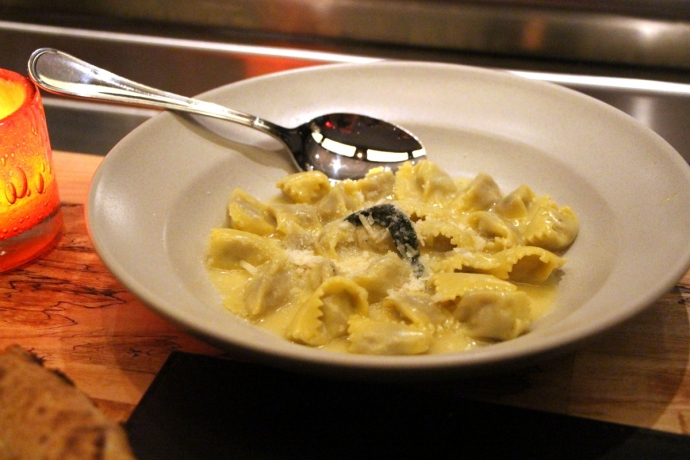 But Ziggy, in Paragraph #4 you used the word “Ambitious”.  What’s so ambitious about Rigatoni, Diavola, and pear.  Good question Timmy.  This is where the steaks and fish come in.  And by steaks I mean those huge $125 dry aged rib eyes that you can hang in your basement and practice on them like Rocky.  They also offer a beautiful pork shoulder, and a Verdure section to boot.  Watching them handle all that meat for two hours, gave me all sorts of impure thoughts.

Cementing the belief even more that pound for pound, Nolita is the best eating neighborhood on the east coast.  This is also another no-topping establishment.  I failed to talk about it, because its really a non-issue until you are reminded about it when you you get the bill.  Its like Santa suddenly shows up to kiss you softly on the cheek 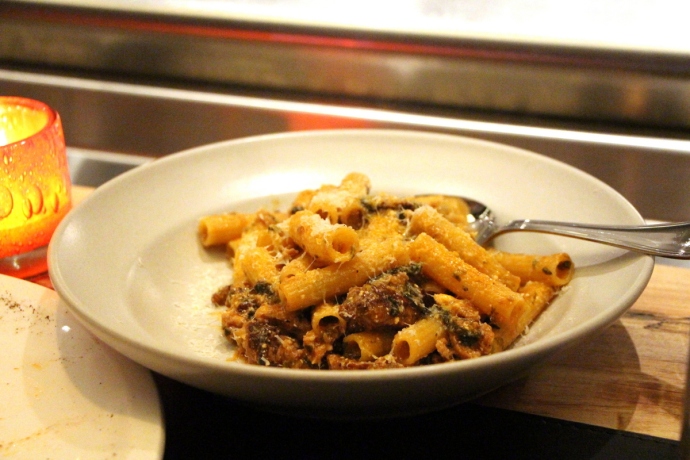 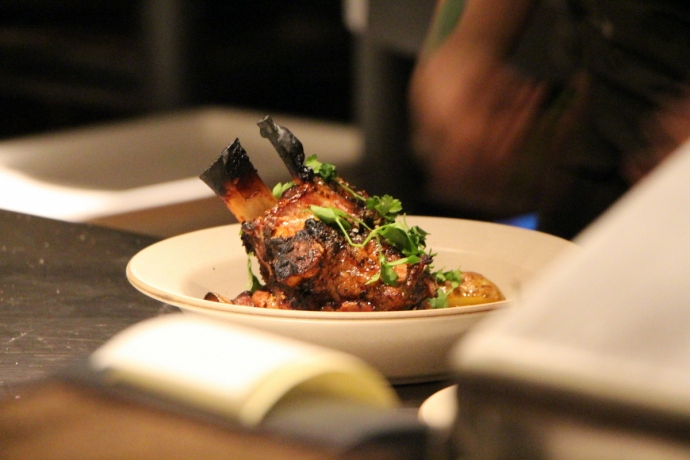 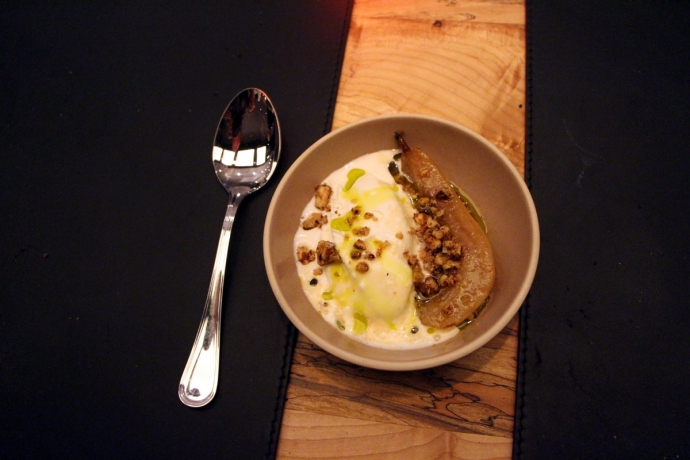 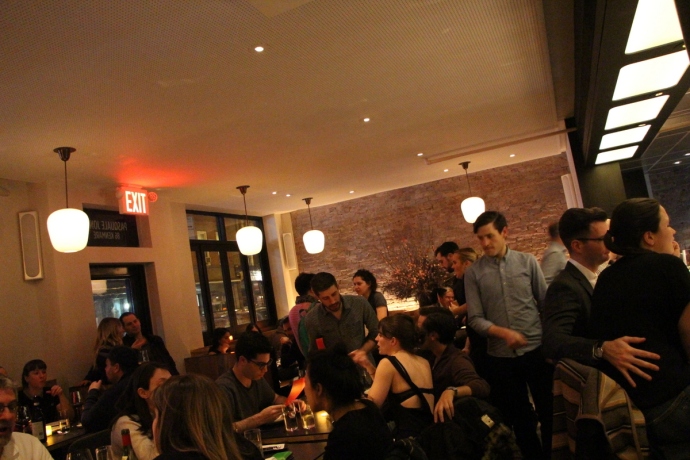 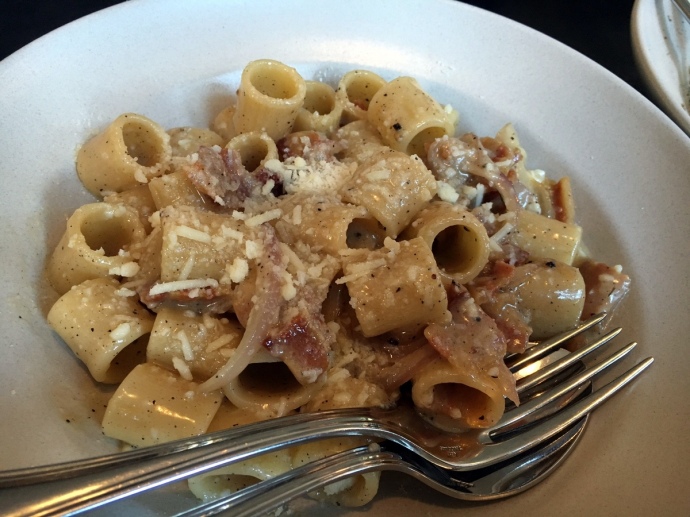