The Usual – I’ll Have what Everyone Else is Having

As we get older, mental lists get less and less effective.  We start to forget things, and sometimes get in trouble as a result, especially with the spouse.  The saving grace is an equally forgetful spouse, but not when she has different habits and writes everything down.  Consider my agenda on my day off today:  Write a post, check the tire in my car, call cable, watch Almodovar’s Pain and Glory, take the dishes out (still not allowed to put them in but in the midst of a mandatory online course), and…  I know I had more, including something important that she asked me to do.  But at the moment I dont have the slightest idea what it is.  I suppose I can ask her, but that’s risky in itself.

Successful people write shit down.  The great Jerry Seinfend said that as you get older you lose your creativity, and the way to combat that is to sit down and write.  He writes for two hours every day.  It’s sort of what I’m doing right now.  I should be writing something about The Usual but instead I’m writing about, well, nothing really.  Like Seinfend, its a blog about nothing.  I wasnt planning to write about nothing when I started writing a few minutes ago.  I definitely planned to write about something.

So as a result of accelerated fading mental lists, about a year ago, I started making a list of new restaurants I’d like to try.  And pretty much ever since then I’ve been staring at The Usual on top of that list.  It wasnt that I ever put it on top.  Its just the oldest name on the list that I kept bumping down in favor of others.  Burger joints still gets your attention, but with so many good ones out there, its hard to get overly enthusiastic.

I first heard of Alvin Cailan when he opened Eggslut, a popup at the Chef Club Counter, offering his famous (in LA at least) egg sandwich.  Eggslut now has locations in LA and the Cosmopolitan hotel in Vegas.  The Cosmo shaping up to be a foodie paradise, attracting the crème de la Crème seems like.  The Filipino-American Cailan is also famous for hosting The Burger Show on Youtube.  And burgers and fried chicken are the focus in NYC, instead of egg sandwiches and Filipino food.  Although rumors are that Cailan will open a Filipino restaurant here soon enough. 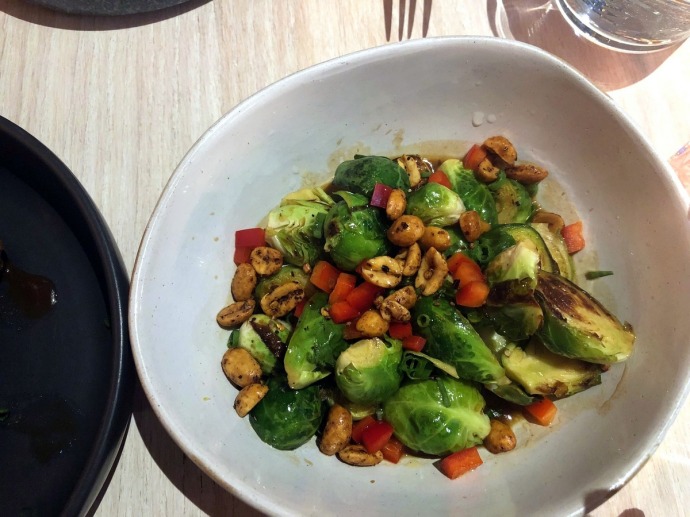 I think Cailan and team figured at some point that at a place called “The Usual”, an online menu is almost useless.  Its not there as of this writing.  People generally come for one or two items, the burger or fried chicken.  We ordered the former as the main, and the latter as the first course.  When we come back, that and only that would be my order.  Among the other dishes we tried were Kung Pao Brussel Sprouts that were cooked well but needed a bit more flair.  And a baked cookie and ice cream that was too sweet and uninspiring.

But the burger was inspiring alright.  Not a designer, fancy one that you’ll find in say NoMad Bar.  Just a solid, well crafted burger.  Two quality smashed patties with American Cheese, garlic aioli, and just enough onions.  Its beefy, well balanced, and just the right size.  And for $20 as you’d expect, served with excellent fries that came with ketchup and a curry aioli.  Combine the two for maximum oomphness.

I’ve heard much about Cailan’s fried chicken.  But oddly, a Korean fried chicken instead on the menu these days.  Not so odd once you try it.  It got all the elements of perfect fried chicken.  Its clean tasting, supremely moist, with just the right amount of crunch and flavor from the thinner than it looks skin.  Perhaps the best KFC (Korean) I’ve ever had.  Looking forward to trying the rest of the menu.  Not really.  I’ll just have the usual.

The Usual
30 Kenmare St (Mott/Elizabeth)
Rating: 2 Z’s (out of 4)
Stars range from Good to Exceptional. Simple as that
Recommended Dishes: Burger, Fried Chicken 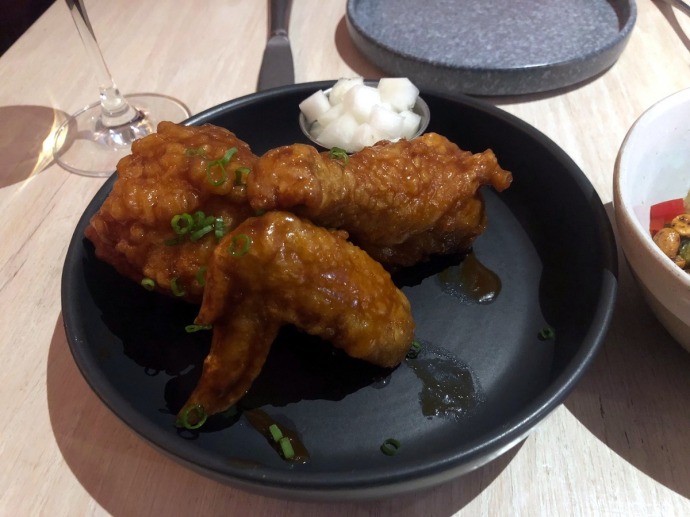