Banana Brown Butter Tart at Herbsaint.  So good we have to have it on every trip.  Rhonda Ruckman the young looking pastry chef is reaching legendary status according to various blogs/publications.  Add their terrific homemade vanilla ice cream and call me in the morning.  (Its just an expression – dont call me) 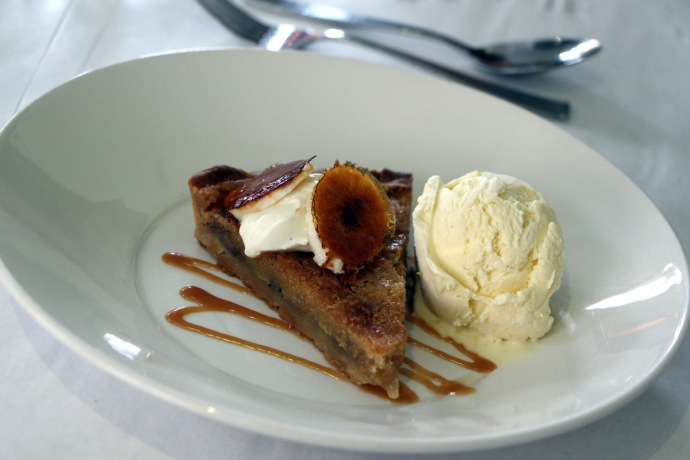 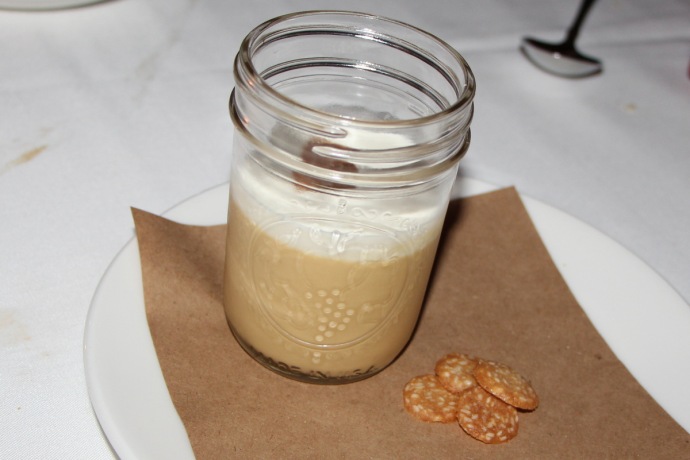 Pecan Pie at Brigtsen’s.  I love love Pecan Pie, and this was probably the best I’ve had.  The pecans are cut so fine that when they fill the top layer it results in a crunchy cookie like texture.  And the inside isn’t as jelly like and gooey as you find in your ordinary pecan pies 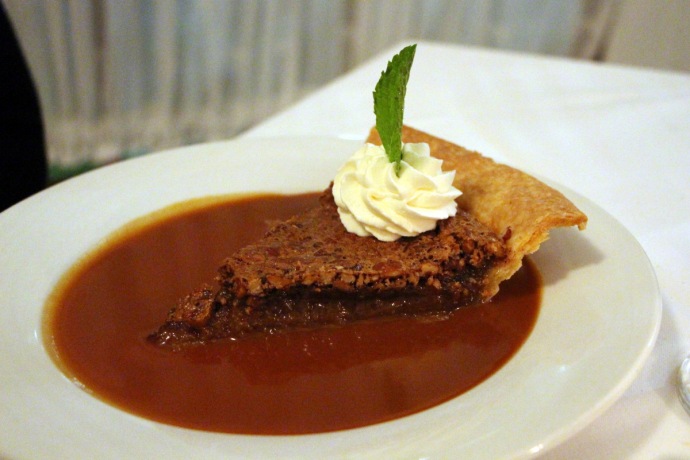 White Chocolate Bread Pudding at GW Fins.   We’ve had some amazing bread pudding in NOLA from the great Cherry Jubilee at SoBou to the funky Krispy Kreme at Boucherie, to the classics of Mr B’s and Commander’s Palace.  But GW’s prevailed and not so much for the white chocolate, but the use of the dark stuff (chocolate) that did it for me

Courtesy of GW Fins via Foodspotting

We are breaking every travel rule on this trip.  We revisit a restaurant for the second time (Mr B’s day 5), we go to a Russian punk concert, we party with hippies, we stand on long lines for a sandwich, and we go to the city zoo.

To get to the zoo is easy.  You take a street car, transfer to a bus mid way, hitchhike to the zoo shuttle that takes you to the zoo motel to spend the night, and in the morning they speed boat you via a series of swamps to the main gate.  To get back you take a taxi!  A very nice zoo once you get over the fact that the animals are in a state of a major midlife crisis or depression.   One gorilla looked extremely concerned about something the entire time.  Another gorilla was staring at me the same way I stare at windows showcasing pastas.  The lions and tigers looked fairly lifeless just lying motionless the entire time until one tiger lying on his stomach just lifted a paw to rest it against a tree, almost saying “here you go, feast on that tourists”.  The flamingoes we very pretty but looked like were having some of an argument, perhaps about where to get the best Gumbo.

Red Gravy – One of the newest and hottest breakfast spots in the heart of the city.  Owner Roseann dishing out all kinds of tasty and unique Italian dishes for breakfast like the popular Polpetta, a meatball ricotta, red gravy omelette.  The Polpetta wasnt on the menu when we visited during the weekend, but we did have a terrific Sicilian Egg Pie, flaky pastry baked with eggs and cheese.  I had the ‘Lost Bread’ special which was a nice variation of french toast while other enjoyed grits with eggs, red gravy and cheese, and another dish of shrimp beignets.  I have to admit although I liked my dish I had serious egg envy. 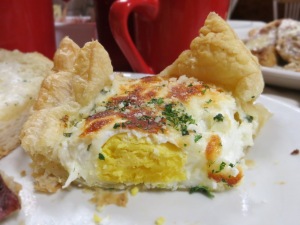 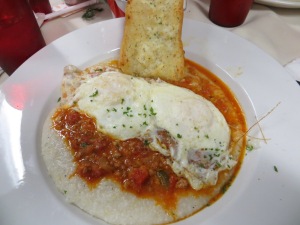 Po’boy Festival on Oak Street – You say Po’boy, I say sandwich.  If there’s a difference between a Po’boy or a regular Italian bread sandwich I dont see it.  But the Po’Boy is big here in N’oleans.

The festival was fun but crazy busy.  We almost turned around and left, but the Hummus Whisperer was smelling something good.  We started with Pascal Manales simple and cooked BBQ shrimp Poboy.  Tasty especially considering this was the shortest line we’ve seen.  The lines to the more popular eateries like the Boucherie food truck painfully stretched.  We tried a variety of sandwiches including Seafood au Gratin from Breads on Oak, the only place using its own made bread, while every other place was using the same bread from the same source.

While the Hummus Whisperer and Mrs Critic greatly enjoyed the Seafood au Gratin, my favorite was probably Sammy’s Ray Ray – juicy fried boneless chicken, ham and cheese, whats not to like.  As is often the case the big disappointment is the one most sought after, Red Fish Grill’s Pecan Crusted Trout Meuniere Poboy. Sounded much tastier than it was.  It was lacking something…what do you call it…oh yes.. FLAVOR! 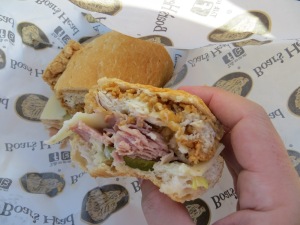 GW Fins – More deliciouness! Another New Orleans legend but not exactly New Orleans food.  What you get is a fresh seafood extravaganza where the seasonal menu changes almost on a daily basis.  A truly spectacular menu for seafood lovers.  Started with their famous  Lobster Dumplings which were very satisfying, like very good Russian Pilmeni. The sizzling oysters were sizzling alright, and absolutely delicious.  The blue crab pot stickers were a bit too doughy but enjoyable nonetheless. 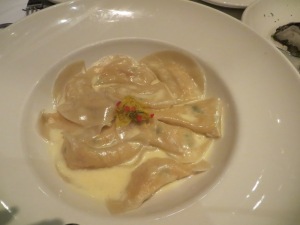 I was looking for their renowned Scalibut (scallops encrusted halibut) on the menu but it took the day off.  Nevertheless we really enjoyed the Brie and blue crab stuffed flounder with some sort of bread and mushroom concoction and asparagus.  The black drum was simply fried and came with a delicious lobster risotto that stole the show.  A dish of just the risotto would have been just fine me thinks.  I didnt expect to see Maine lobster in New Orleans.

One of our missions on this trip was to fill ourselves with as much Bread pudding as possible as we dont really get any good ones in NY.  We ate about 8 of these babies in pretty much every dining establishments.  A clear winner has emerged in GW Fins.  White chocolate and caramel bread pudding with dark chocolate and pecans.  The dark chocolate is really the difference maker here.  You know something is good when you can’t have enough of something while completely full.   A nice ending to another terrific meal