How did we function before Google?  How did you go about reserving at a place like Brigtsen’s?  Did you do it via those large yellow books I sometimes find by my doorsteps, which normally means I have to do an unexpected trip to the garbage cans (after work, its a trip.  I prefer by appointment).  I’m only in my late 30’s (44 to be exact!) but I dont recall ever using these little yellow behemoths for dining.  I wonder because Brigtsen’s probably broke the record for the number of times I Googled a restaurant (previously held by Atchafalaya).  Mostly because I could never really get the spelling right.  I spelled it every wrong way possible including “Frank’s”, and sticking H’s where they dont belong.  Even now I had to Google it for the purpose of this post.  Copy and Paste – best invention since Ctl-Alt-Del IMO.

Its not a coincidence that this was our first night’s meal.  Frank (Ctl-V) Brigtsen’s, a James Beard award winner is one of NOLA’s great Creole ambassadors.  A long stint under the great Paul Prudhomme at K-Paul’s Louisiana Kitchen after starting with chef Paul at Commander’s Palace didnt hurt.  I was in fact debating between K-Paul’s and Brigtsen’s for this trip and very happy with the choice.  The restaurant itself is inside a Victorian Cottage and just about as homey as it gets.  It felt like eating at uncle’s house except that (a bonus normally in my family) the uncle never comes out of the kitchen.

Started with a terrific duo of soups.  A very dark and satisfying seafood gumbo, and an even better butternut shrimp bisque that turned my little one into a bisque junkie/critic the rest of the trip. The bisque was creamy, not too sweet, and had just enough pleasant heat to balance things out.  Shrimp Remoulade with Guacamole, Deviled Eggs and a surprisingly scrumptious corn relish was a nice medley of flavors and textures with the mustardy Remoulade at the helm.  The crawfish shortcake with peppery étouffée and corn was equally enjoyable. 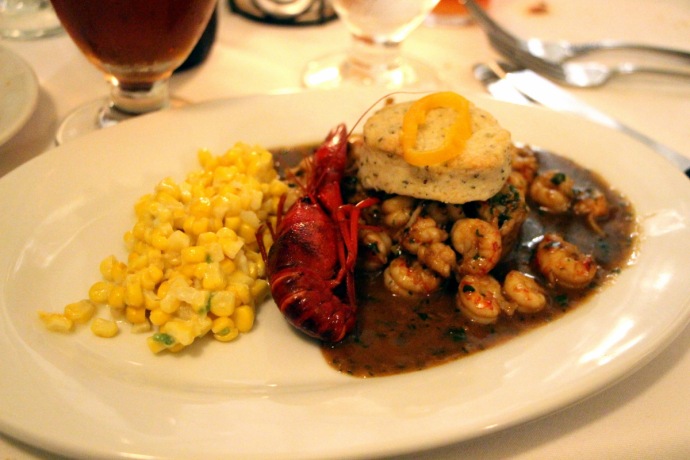 As for the mains we shared the Paneed Rabbit with mustard sauce.  We attacked this perfectly executed Schnitzel-like thing with full force.  And we had to have the famous Seafood Platter (aka the “Shell Beach Diet”).  Six different items on the plate including a great Drum Amandine with plenty of almond action, two different baked oysters (too full to enjoy and critic), a terrific smoky shrimp jalapeño cornbread (really liked this) and shrimp coleslaw.  The only thing I didn’t care for is the Why-So-Sweet scallop.  Fantastic dish overall though.

The dessert was perhaps the highlight.  The banana bread pudding was top notch but it was as expected the pecan pie that stole the show.  The pecans are cut so fine that when they fill the top layer it results in a crunchy cookie like texture.  And the inside isn’t as jelly like and gooey as you find in your ordinary pecan pies.  Now I get it.  Coffee I should say was surprisingly undrinkable here, but a solid meal overall at uncle’s house 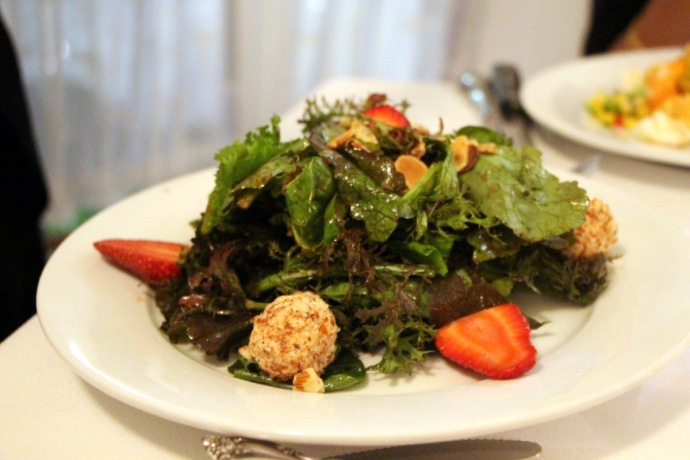 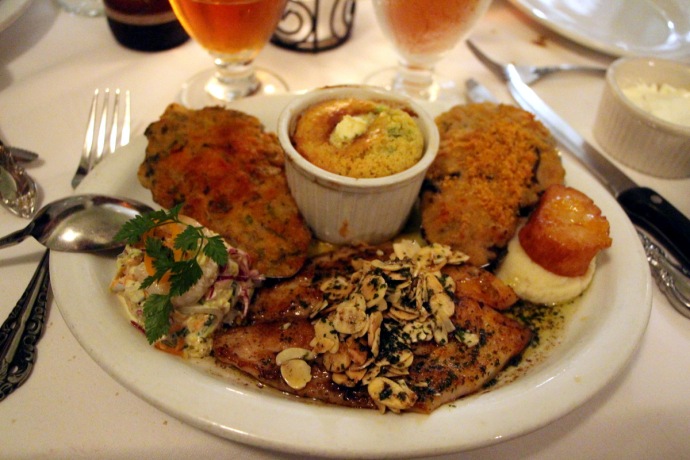