A series of unanticipated themes can emerge during ones travels.  Sometimes you discover them during the research process, and sometimes they come totally unexpected.  A particular food, wine, or even a song that will remind you of a place every time you listen to it in the future.  LP – Lost on You for example takes me to Sicily.  Its my yoga.  And I can sort of see pesto becoming one of the subjects of the next trip.  But this was a different type of theme.  An educational and sober one.  Guernica, a subject I didnt know much about prior to the trip, became the theme throughout the last trip.

On April 26th, 1937, the Basque town of Guernica was bombed by the Nazis as a favor to General Franco during the Spanish Civil War.  It was a market day, and the first bombardment of this kind on civilians.  It was essentially target practice for the Nazis.  Guernica is the subject of a mural size painting by Pablo Picasso housed in Museo Reina Sofia in Madrid which we saw on our first night in Spain.  Its arguably his most famous and important work.  A week later we went to the actual town of Guernica and learned more about the event, and why they chose this town.

Guernica, the ultra popular seafood mecca in Luanco, Asturias was an accidental continuation of the theme.  I dont recall how I stumbled upon it, but do recall the saliva inducing images that sold me, and my anticipation for seafood cravings at this point of the trip.  We took a 50 km detour from Oviedo and pretty much planned the entire day around this lunch.  But calling it after the painting and catastrophe always felt a bit odd to me.  I figured maybe I would understand it better once we get there, but that never happened.

But as soon as you come in, you get hit with this in your face confirmation that you are in the right place and nothing can go wrong.  Absolutely packed with locals, families enjoying lunch on a Sunday afternoon.  3:30 is lunch in this part of the world.  Pixin (monkfish) and clam infused rice dishes that can feed a small village flying everywhere.  Do they have more for us?  You betcha!  We couldnt get enough of the rice dishes (meat or seafood) in Asturias, but this was a particular umami highlight.

There was also simply grilled fresh sea bass with garlic.  This is not the Turkey farmed Branzini served all over New York City.  And when you look up Spanish Pulpo in the food bible there ought to be a picture of this Octopus.  This one had the texture and flavor to match the look.  And then you start to remember why you are here in the first place.  The images!  These Zamburinas were simply phenomenal.  Still kicking myself for having them only once but we didnt see them much on menus in the north.  Go! 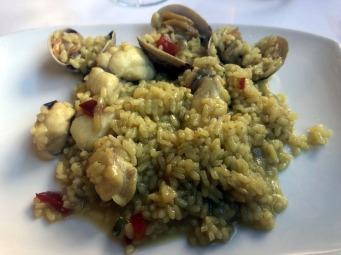