A Weekend of Firsts: Mogador & Cookshop 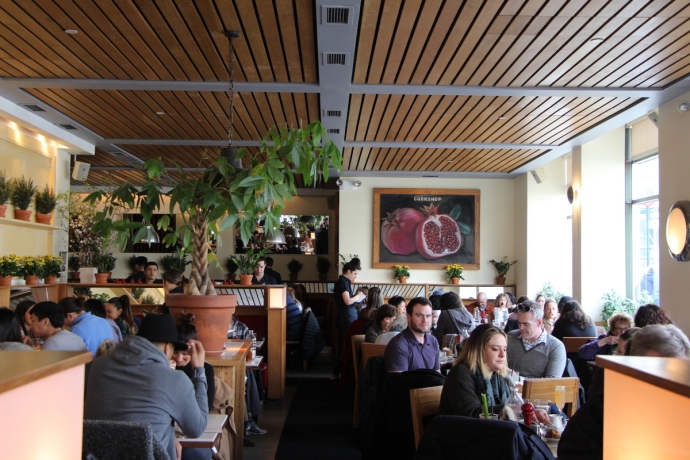 We visited two old timer, neighborhood spots for the very first time this weekend, and here’s what happened.

Considering the amount of places we visit, it almost feels embarrassing that we never made it to this popular Tagine mecca in East Village or Williamsburg.  Only the couscous gods can explain why it took me so many years, especially considering a well made Tagine is one of my favorite things to eat on this planet.  With that said, now that I’ve finally done it, and made to the schlep to the Burg, I feel like the couscous gods need more explaining to do.

Once inside, its no mistaken that you are in a bustling neighborhood spot in the heart of Williamsburg.  Arm Tattooed hipsters hovering all over, along with arm tattooed hipsters holding arm tattooed babies.  You can tell that these are the coolest babies in the world.  The ones that go to sleep before us.  The quoted 20-30 turned into a closer to an hour, though we didnt mind as the bar was roomy and the drinks were good.  Good Dark and Stormy.

Started with a nice Mixed Platter consisting of an Eggplant & Tahini concoction, an “I cant believe this is not Israeli” Arabic salad, and a surprisingly decent Hummus.  In places like this, the hummus usually lacking the creaminess, and texture that I like.  We also shared a tender tandoor marinated chicken, and a delicious grilled Halloumi cheese.  Unfortunately, and quite shockingly, the fun essentially stopped here.  The famous Tagine, with the choice of apricot & prune was fall off the bone tender and juicy alright, though somewhat one-note and sweeter than should be.  Yes, apricot and prunes are sweet, I get it.  But where are those bold Moroccan spices, the Taginess you bump into from time to time like at Bar Bolonat.  The great Mogador Tagine is widely known for the best Tagine in town (Google it).  This was more like a second place potluck dinner party with friends winner.  The same, albeit, slightly lesser degree can be said about the Couscous dishes which are almost similar to the couscous you get with the Tagine.  I would consider introducing those pearl like bubbly Israeli couscous instead to go a long with the Tagine.  133 Wythe Ave (7/8) 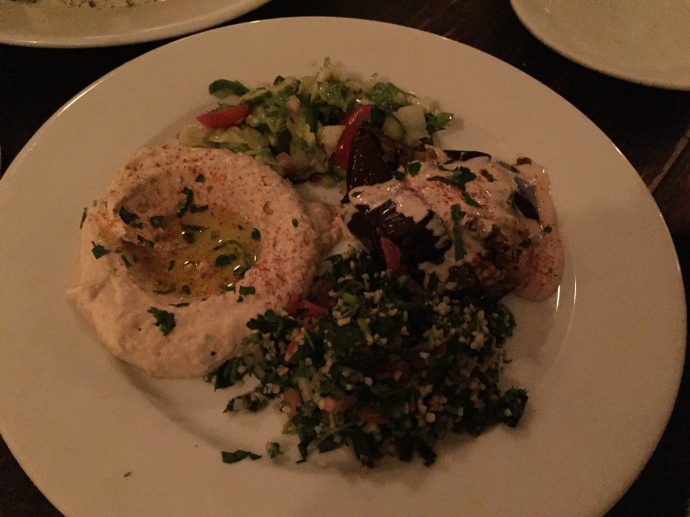 Yes, I know, I know.  I’ve never been to Cookshop.  Like Cafe Mogador, this is another super popular neighborhood spot, and yeah, I do have some serious hood envy.  But just like with Mogador, I never felt that this is a destination place.  Cookshop is long considered as one of our premier Brunch spots, and now I see why.  40 minutes wait on a Sunday morning, even though the place is kind of huge.  Its so big that the staff, when leaving and entering the kitchen area, is instructed to direct people to the vacant airplane like bathrooms that are in the same vicinity, but not directly next to each other.  A couple of them are essentially in the kitchen.  They can easily hire a bathroom attendant whose job would be to direct traffic while wearing aviation ground headset (its really loud in there) and sticks.

We had some major cooking plans that night courtesy of the Chelsea Market nearby but we did get enough of a taste here.  We started with the Beignets, filled with Di Palo’s fresh ricotta that blended nicely with the dough.  Beignets that NOLA experts may appreciate, though I cant say the same thing about the Bloody Mary.  The kids opted for burgers.  The older opted for a fried egg with hers, which had me shed a little tear.  This is the most important milestone since she tried squid ink pasta in Venice.  The burgers were nicely cooked, though the fries were salty to the point of uneatable.  100 kuddos points for removing the Beignets from the bill after mentioning this to the waitress.

The Baked French Toast here requires more attention than it gets.  It comes with poached blood oranges, and a lovely, cinnamony cream with almonds.  The nutty bread is just rich and sweet enough.  Some of the best French Toasts we’ve had in NYC.  The Roasted Broccoli & Cheddar Scrambled eggs, with caramelized onions and a fantastic supersized buttermilk biscuit was another solid dish, if not a tad too salty as well.  We enjoyed Cookshop overall.  In a way it reminds me of one of those SF Farm-to-Hipsters spots like NOPA, albeit not quite as good.  156 10th Ave (19/20) 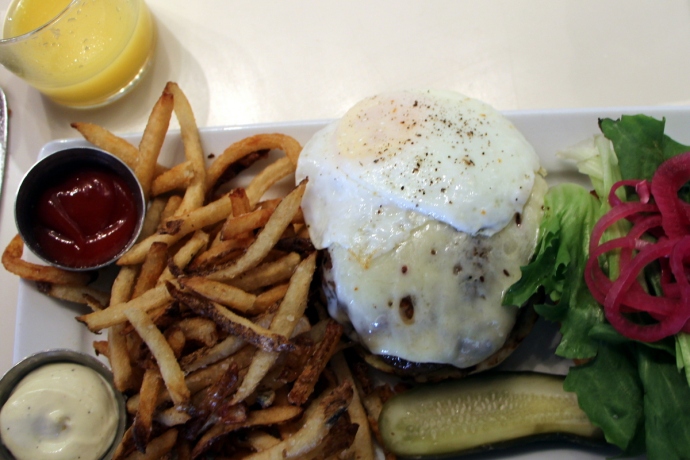