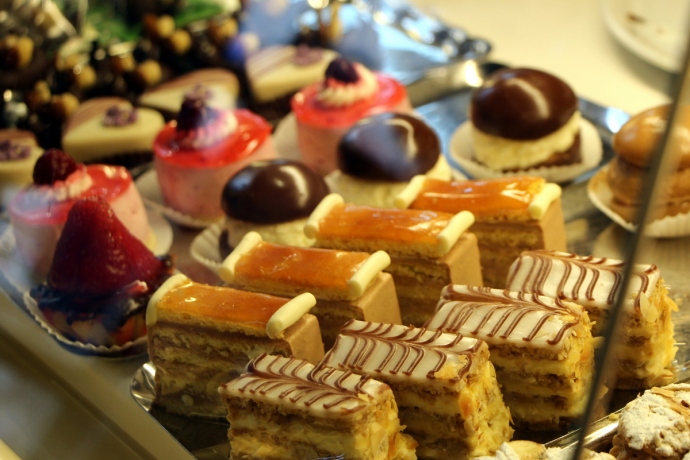 Salzburg did not leave a mark in my imaginary culinary little black book.  I dont exactly have wet dreams about it’s Salzburger Nockerl.  You wont hear me say things like “oh I would die for another Schweinhaxen just about now.  And with some consideration to where I live, I’m not going to miss its ethnic, seafood, fine dining scene either.  But in a way, that is what makes this post so important.  While there was nothing particularly spectacular about the food, in a city not renowned for its culinary ingenuity, we managed to eat fairly well.  Hooray to research?  Possibly.  As always, I did spend a significant amount of time researching, especially considering we had four days to fill.  And considering the spectacular day trips one can make from this base, four days is the minimum one should consider 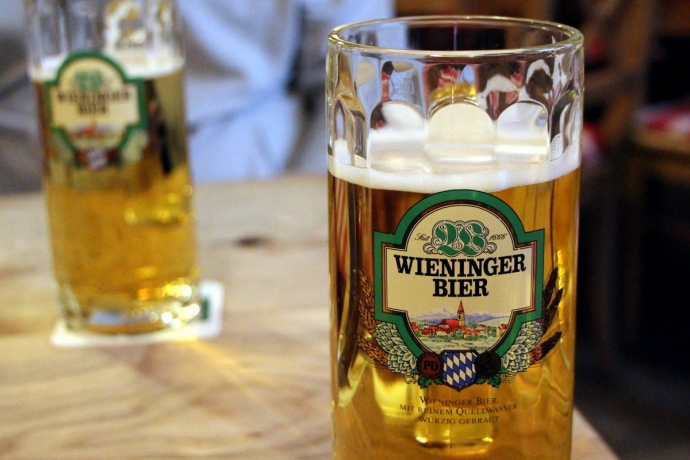 We started off the bat with a foxy one, Alter Fuchs, one letter away from losing its Google friendliness.  The soups here in particular were satisfying.  A solid veal schnitzel, and something we haven’t seen much during the trip, spatzle, which came with pork cubes and gravy.  When in Salzburg… you gotta have the great looking Salzburger Nockerl, but the higher sweetness levels proved a little too much for our palates.  Contrary to what its website said this fox is open on Sunday, a rarity in Salzburg. 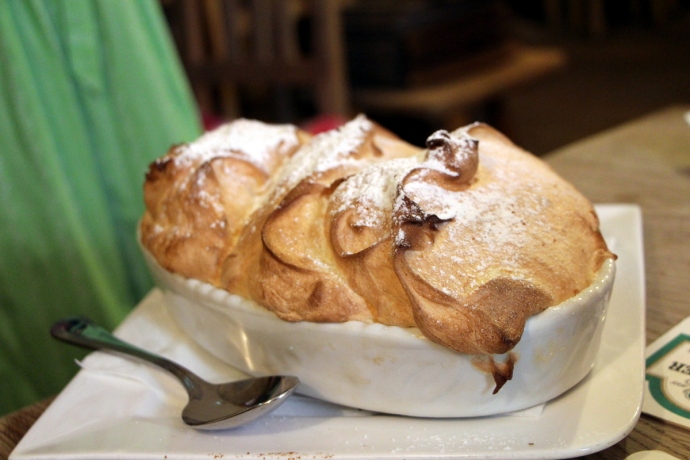 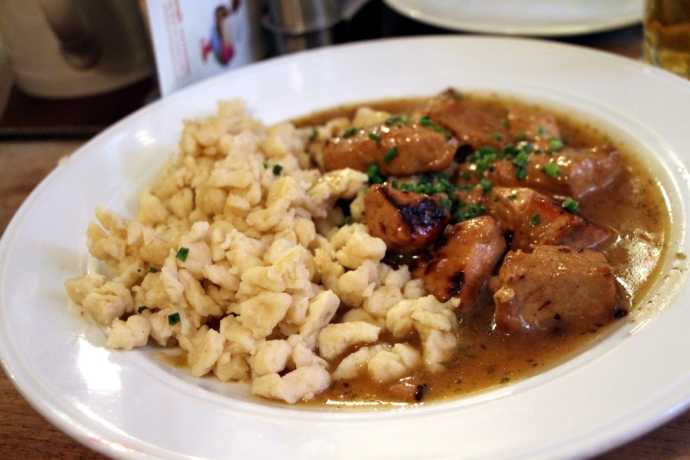 After a long day trip, like in the scenic Salzkammergut region, Die Weisse and its sprawling garden is the perfect retreat.  The place is somewhat secluded in a residential area away from those pesky tourists.  Full menu featuring a cheesy Kaspressknodelslsuppe (beef broth soup with cheesy dumpling), a brighter more acidic than usual goulash, and other classics like the Teleschpitz with an oniony gravy.  Innviertler dumplings were interesting and  flavorful.  The place was packed with locals, enjoying good food, and one of the better beers of the trip (their own).  It seemed like we were the only pesky ones there 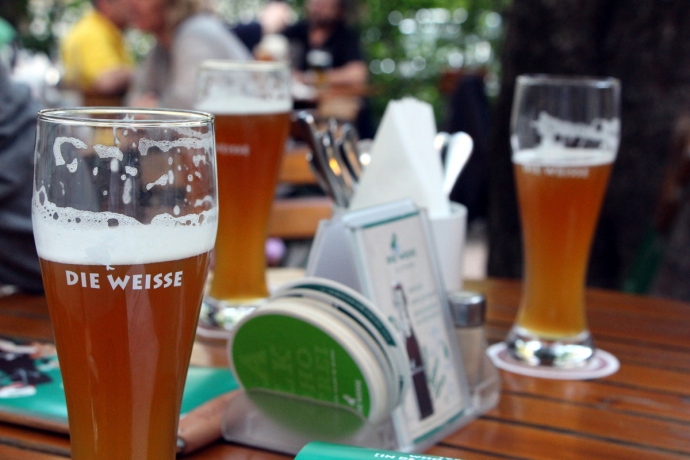 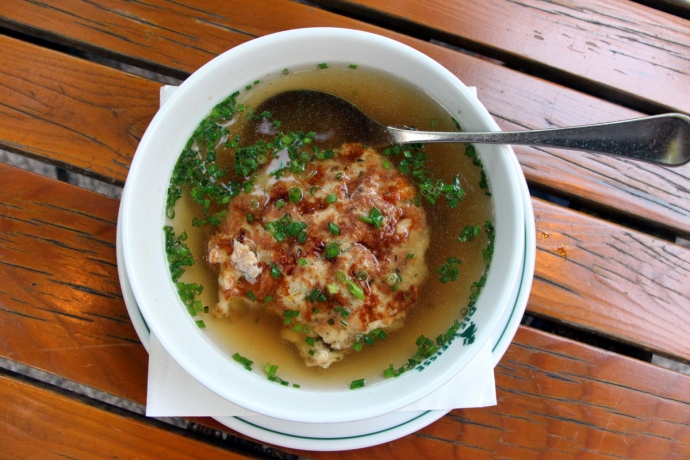 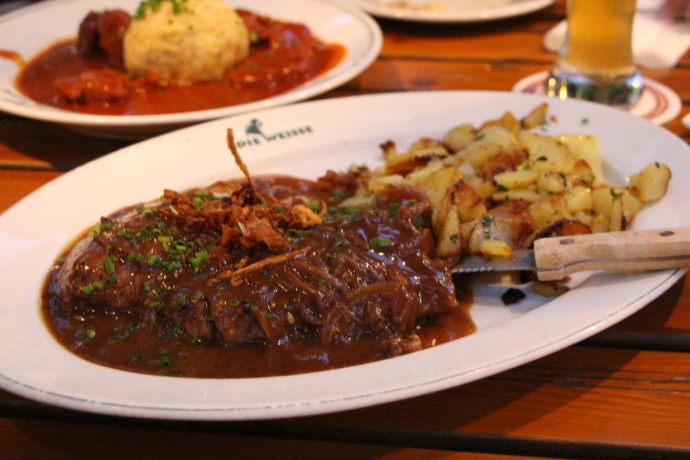 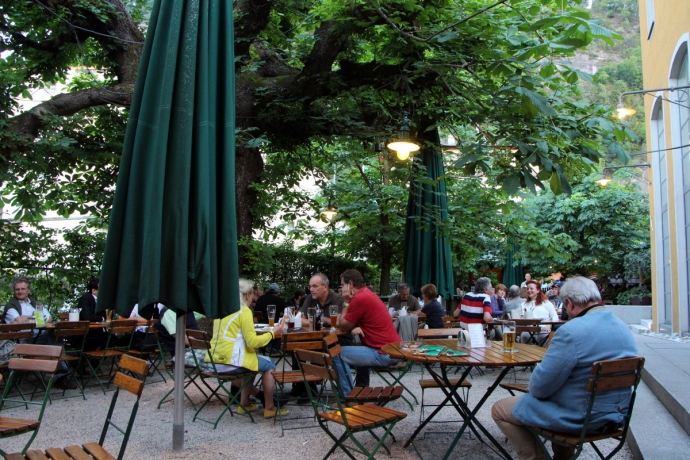 If Salzburg is in the middle or end of your meat heavy itinerary, chances are you are ready for a change at this point.  And by change I mean Korean.  Koreasküche HIBISKUS in the Mozarteum is an odd location for the town’s lone Korean.  The apps here were a little weak, but the rest of the offerings featured plenty of  those Korean bold flavors.  Bibimbap was one little egg shy from completion (ask for egg).  Chicken with curry sauce was all too familiar in a good way.  Fried tofu came with exceptionally tasty veggies.  The winner was the spiciest dish in the form of porky goodness sautéed with fire.  Mozart would be proud, and confused. 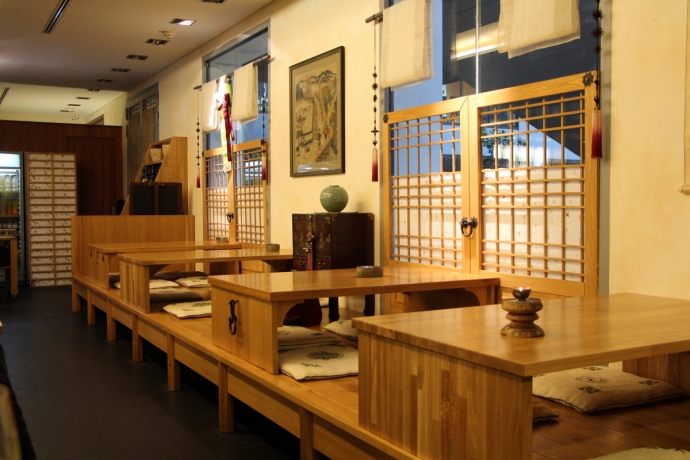 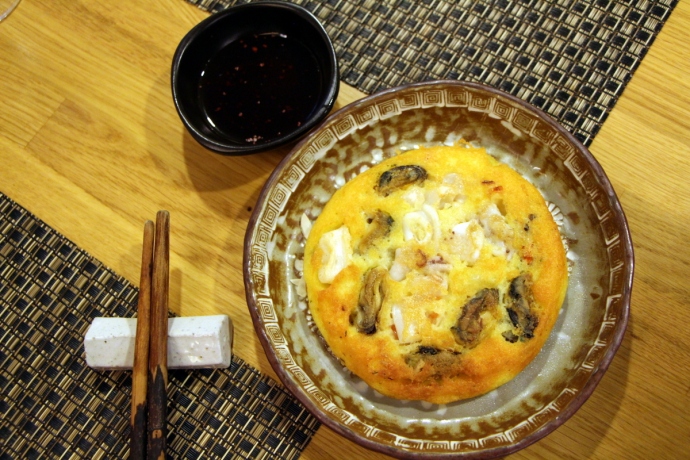 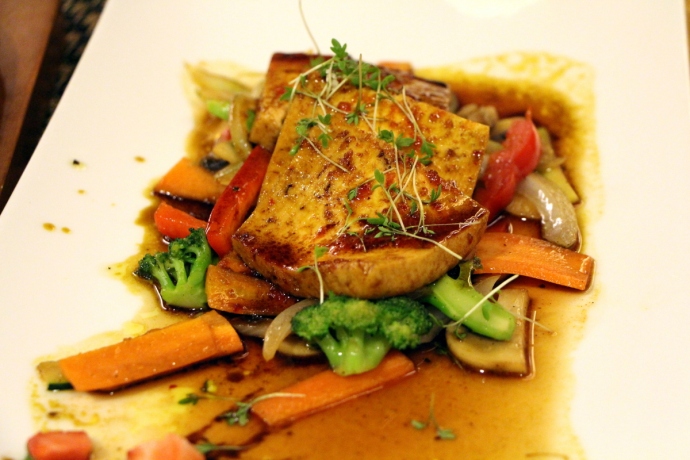 At Stadtkrug hotel we enjoyed some farm to Ziggy flair and one of the more memorable meals in Salzburg.  Italian owner (my favorite kind) Luciano walks around treating everyone like long lost relatives.  The bulky sweet white asparagus was something I couldn’t get enough of during the entire trip.  An outstanding Beef Stroganoff with a side of yet another rare spatzle.  And a fine entrecote with flavors meant to forgive and forget its slight overcookness.  Another one of very few open on Sundays 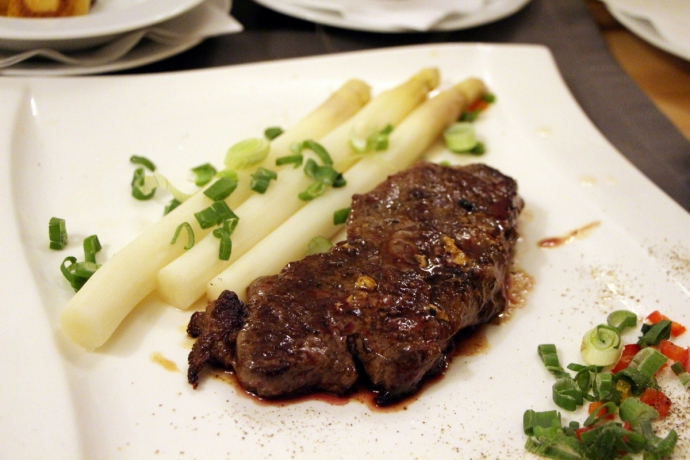 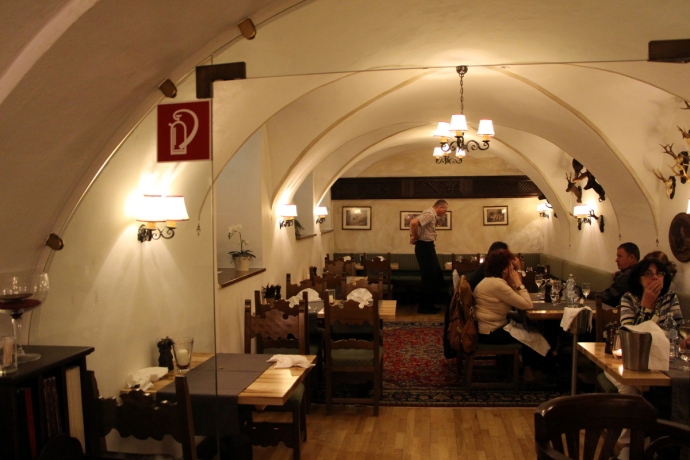 The friendly smiles in one Michelin Esszimmer will win you over, if the food doestnt do that first.  Four seafood and vegetable heavy fixed menus to choose from, may frustrate those looking for them online.  I already blogged about this one here

At Pescheria Backi we were transported to a Key West fisherman’s shack.  A family affair dishing out fresh seafood of all kinds right in the middle of Salzburg.  Other than the squid that could have used a little less salt, very good seafood all around.  For an appetizer you can ask them to make you a plate of various seafood salads and spreads, but verify the price first, and consider getting for one or two less people (if you are a group of 4, get for three, etc).  Popular with locals 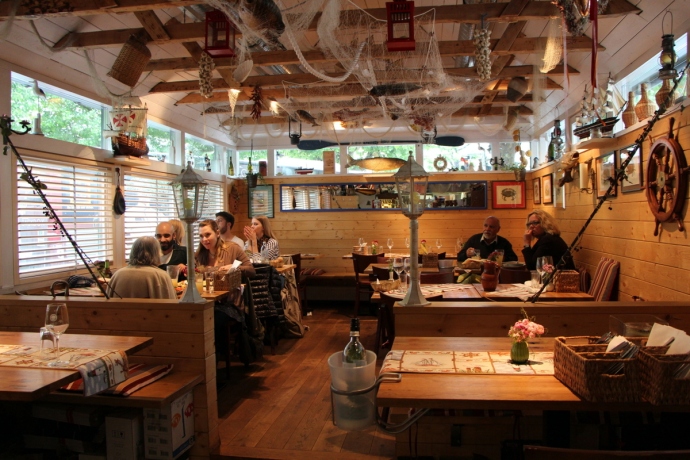 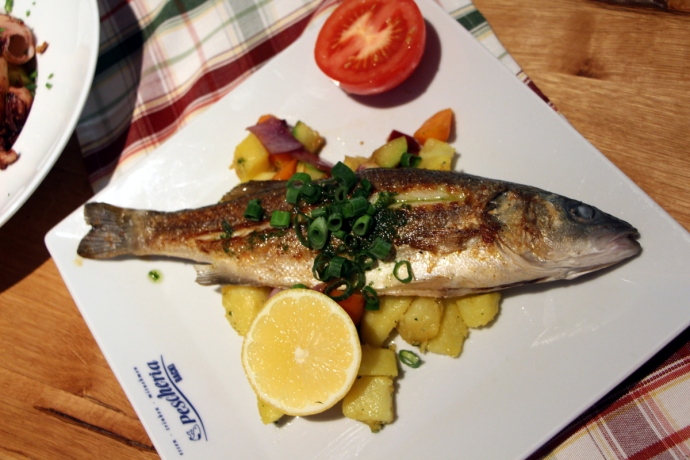 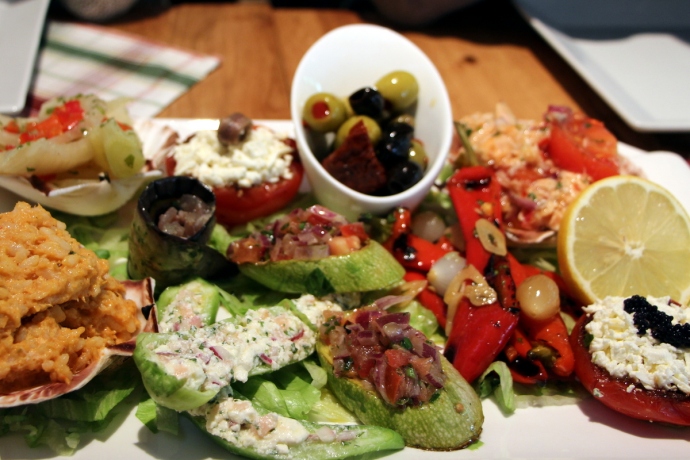 Highlights outside of Salzburg:  Sausage stand at Bad Ischl (Esplanade/Wirerstrasse corner by the bridge) gave me some serious sausage envy!  It was just pure juicy, spicy awesomeness.  Gaststätte Echostüberl on Konigssee was another highlight which I mentioned briefly here.  Beautiful setting, great fish and meat dishes. 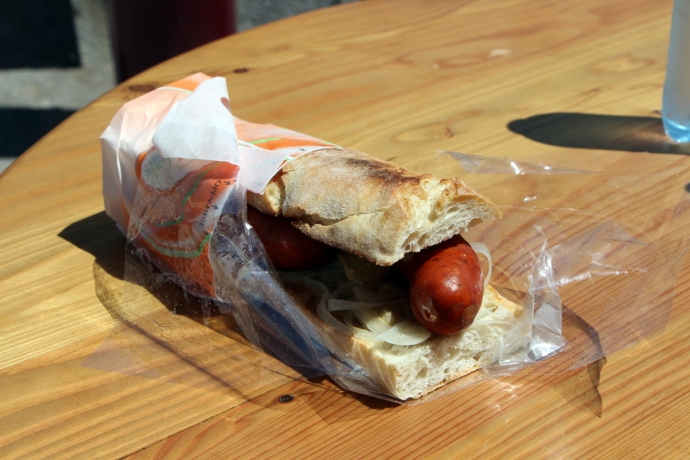 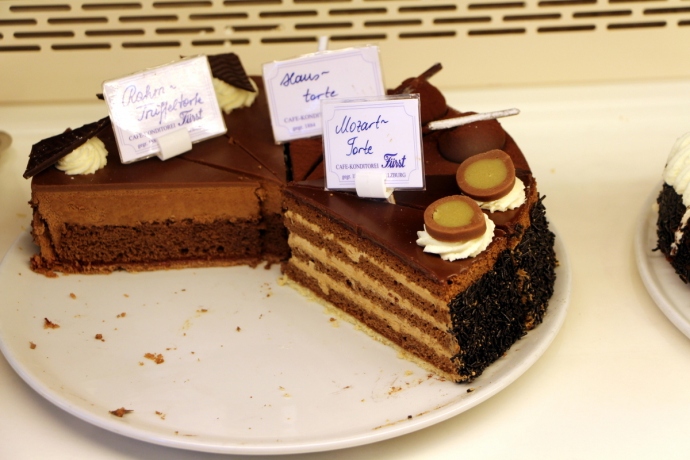