This is Colle di Val d’Elsa

What is the perfect base?  Its not rocket science.  Put your destination stars on the map, and pick something in the middle.  The only decision is whether it will be a city, a town, village, or something in the countryside like a villa or Agriturismo.  You’ll find many advantages and disadvantages with all options.  Thats why mixing it up a little works for many.

Colle di Val d’Elsa is a town in central Tuscany, or “North” Tuscany when you look at it from the tourist or wine vantage point, with Val d’Orcia in the south and Chianti in the north.  Its perched on a hill on top of River Elsa and the Esla Valley, hence the name which took us a good three days to pronounce.  Its smack in between the “The Kings of the North”, Siena and San Gimignano.  That makes Chianti well within reach, and Florence less than an hour by car.

But what makes Colle even more unique is the town itself, and the lack of those pesky tourists.  Its not in the destination level of Lucca, Pisa, or Siena as its lacking the monuments and attractions.  But as a base, it offers just enough.  Colle has a picturesque old town (Colle Alta), a new town surrounding a beautiful square, and another “town” which is sort of something in between the old and the new.  The old town sits on top of the new town.  In fact the only modern structure you’ll see in the old town is the elevator connecting it to the new town below.  It looks and functions like a time machine.  I’m slightly influenced by a dark German series I’m watching now on Netflix called well, Dark.  Everything looks like a time machine to me these days.

But lack of tourists can sometimes feel that, lacking, if you dont find a thriving local life.  Thats not a problem with Colle.  Plenty of bakeries, restaurants, markets, atmospheric squares and even a glass museum.  Colle di Val d’Elsa produces 15% of the world’s crystal, and roughly 95% of Italy’s production.  Its the birthplace of the famous artist Arnolfo di Cambio.  One of the most famous restaurants in Tuscany, and the only Michelin star establishment in Colle, took his name.

Stay – Palazzo San Lorenzo.  A former hospital turned into a serviceable, modern hotel.  Easy to get in and out with a car.  Ample parking within 5 minute walk outside the only gate remaining.  Comfortable huge rooms, decent breakfast, with a restaurant and spa.

Eat – L’oste di Borgo.  A  young couple running what looks like one of the more popular restaurants in town.   More to come on this gem very soon

See – The mentioned glass museum, old town and the palazzos lining the main road on top, the new town at night, and more vistas than you can count.  Well, on two hands at least. 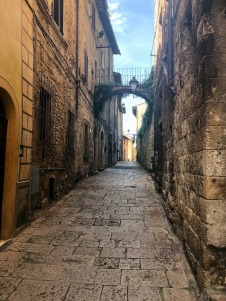 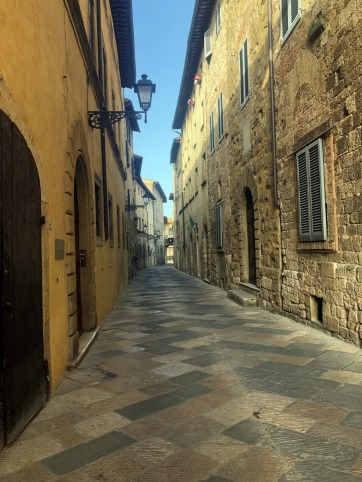 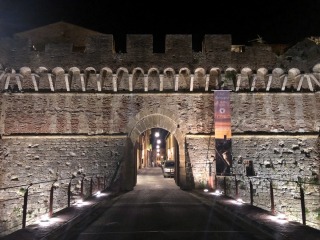 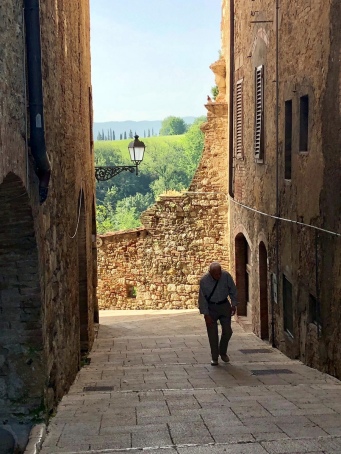