Where to Eat Roman in NYC

I once asked a chef in Piedmont where he likes to eat when he goes to NYC.  Maialino, he said.  But dont you want to eat some Sushi, Thai, or Uzbek, something perhaps hard to get back at home, I asked.  Good Roman food is hard to get here too, he said.  Perhaps for the same reason you see Italians flock to Eataly here.  It took me a few trips to Italy to understand what Italians have been telling me all along.  There’s really no such thing as Italian food.

When in Rome, eat like Romans.  When in NYC, eat the world.  The world includes Rome last time I checked.  And Roman cuisine is one of the great wonders of the world.  It is precise, simple, rustic, and can be absolutely addictive when done right.  If you spent any time in Rome you would be rotating between Cacio e Pepe, Carbonara, Amatriciana, Gricia pastas and thin crust roman pizza, and then spend 6 months trying to find it back home.  Much easier to do so in NYC these days

Maialino – This is the first place that comes to mind.  Head chef Nick Anderer spent some time in Rome studying the art and getting all inspired for all of us.  While its not strictly Roman, it may be the only place that does all four classic pastas (all 4 for lunch, minus the Gricia for dinner), and does it well.

Marta – Staying with the Anderer theme.  While there were already restaurants out here serving Roman style pizzas, Anderer made people like me notice them.  These are the round matzoh-like cracker thin pies that are generally available only in the evening in Rome (after 7:30).  So if you missed it on your cruise day trip, do not despair.  Just go to Marta and get the Patate Carbonara, arguably NY’s best white pie

Trapizzino – They are back baby.  The Roman snack made its debut first 5 years ago in Madison Square Eats by a team properly named, Broken English.  That debut lasted roughly 5 minutes seemed like.  But last week a roomy brick and mortar called by the snack namesake opened in Lower East Side.  Trapizzino are like smallish triangle pizza pita pockets stuffed with various ragus and combinations.  I enjoyed my Oxtail ragu last week, and come to think of it, the Oxtail ragu I had 5 years ago (I’m starting to suspect I really like Oxtail).  They also sell Suppli, the Roman Arancini.

Sullivan Street Bakery – This is the closest thing we have to a Roman bakery.  The only thing its missing is the foot traffic, and hence the constant flow of fresh pizza al taglio (sliced square pizza).  Its tucked deep inside Hell’s Kitchen, and other than the occasional tour group (there he goes again with the self promotion, so annoying), foot traffic is minimal.  But there’s a healthy wholesale business due to the outrageously good bread, and pastries like Bambolini (donuts) and Canottos that keeps those pesky tour guides and locals coming.

Lilia – This is not exactly Roman, and you may say not Roman at all.  But I came out of there feeling like I’ve eaten some of the best Roman inspired food I’ve ever had.  Problem is its now way too popular for a return trip, one of the toughest tables in town today.  But if you are one of the lucky ones, a must try is the Cacio e Pepe like Mafaldine, ribbons infused with Parmigiano Reggiano and pink peppercorns.  And cacio e pepe fritelle which are fritters filled with pecorino and black pepper.

Others – Lupa, Emporio (Roman inspired trattoria/pizza), Via Carota (for the very legit Cacio e Pepe), Barbuto (some of the city’s most notable Carbonaras), Morandi 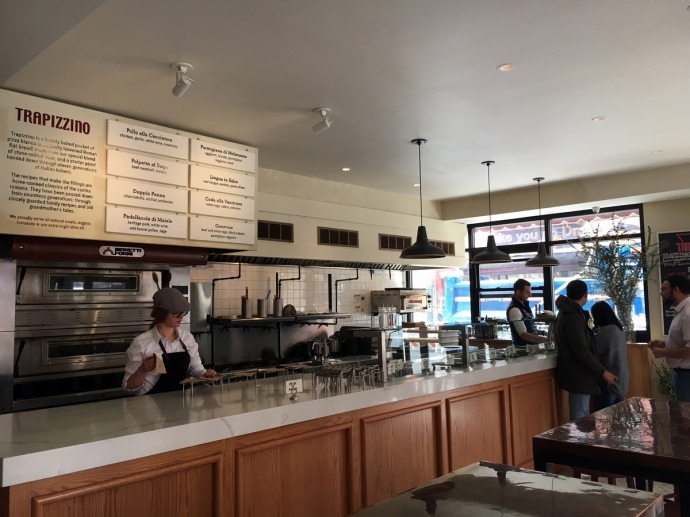 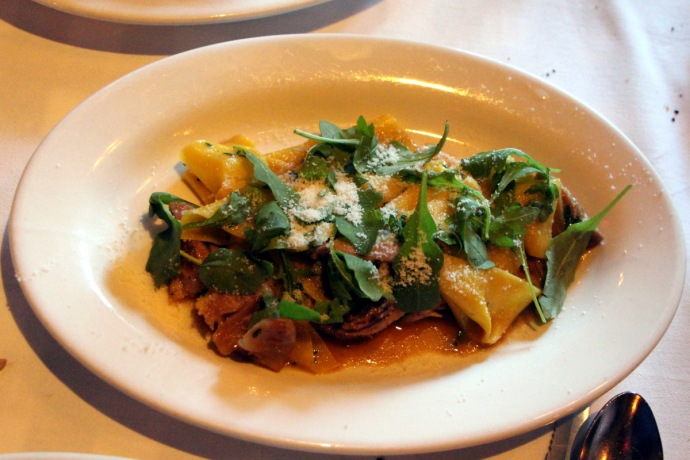 Maialino has always been one of those easy, solid, high probability recommendations over the past 3 years.  I’ve recommended it to people not only looking for “Italian” in NYC but also “Not Italian”, with the hopes that if anything will convert them this is it.  I’ve been singing its praise to restaurant owners from Naples to Alba while touring the country.  I’ve been a fan of Nick Anderer for years, and since meeting him at the Parla/Bonci event at Paulie Gee’s, had some fun conversations with him at Marta, which is one of my favorite new places in town.  Hence, its somewhat awkward for me to write this post, but I’m doing it out of love and appreciation, not hate. I would hate to see the place turn into another Union Square Cafe

The meal wasnt terrible by any stretch.  But the name carries certain expectations, and anticipations, especially when its a special birthday dinner with the family.  I always think about that walk to the park with my friend Val and his Bulldog Rocco who out of sheer excitement, farts his way the entire length of the walk until he finally gets to his favorite pooping spot.  You can feel and smell the anticipation along the way.  But imagine if after all these years, Rocco finds out that his spot has been discovered by a Yorkshire Terrier, or worse, replaced by a condominium development.  Something was off the other night, and I’m hoping it was just a Sunday night off-night

The Salumi here has never been a strong suit to begin with, although I found the selection plate still orderable partly due to lack of other desirable options (where’s that octopus when you need it).  The Mortadella for example is cut thick with texture and taste resembling its bastardized Bologna more than actual Mortadella. 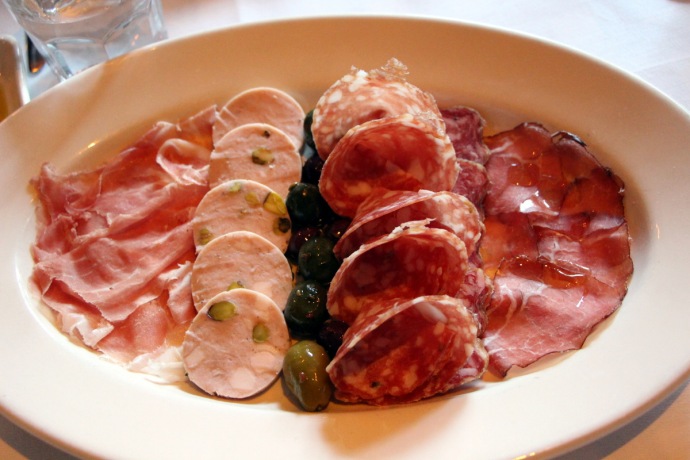 The Cacio e Pepe and Carbonara still delivered, although the Cacio carried a little less magic than in the past.  But that Guanciale in the Carbonara, I can chew on that forever.  Or more like 5 minutes, which is like a lifetime in Guanciale years.  The Pappardelle was just fine.  Chunks of tender nicely cooked pork with light cream.  Not your typical Ragu, and missing that beautiful marriage between meat and pasta.

For main we shared another pasta, the Malfatti with the braised Maialino (suckling pig) and arugula.  But wait a minute, this dish looks familiar.  As in 7 minutes ago familiar.  Way too identical to the Pappardelle, but sounded much different.  “Malfatti” I suppose is a very loose interpretation of something misshaped or badly formed, and I’ve always associated it with ugly pasta-less (more like gnocchi) ricotta/spinach dumplings as in Al Di La in Brooklyn.  But here it looks like hand ripped thin pasta, like Pappardelle “squares”.  The pig had decent flavor if not a bit one-note (salt), but by this point we were craving for something more Raguish.  The Garganelli which I enjoyed in the past with rabbit could have filled the void but was missing in action.

Very often one dish can make or break a meal, and in this case the decider was the Oxtail.  When I had the dish before, the beautiful tender meat was easily falling off the bone in liberal fashion.  This time I had to work hard managing the unrendered fat, distributing the kill like a mother wolf feeding her three babies.  The surprising highlight of the evening was the panna cotta look-alike Cheesecake with sour cherries.  Hope I’m still welcomed at Marta, but if not I’ll understand 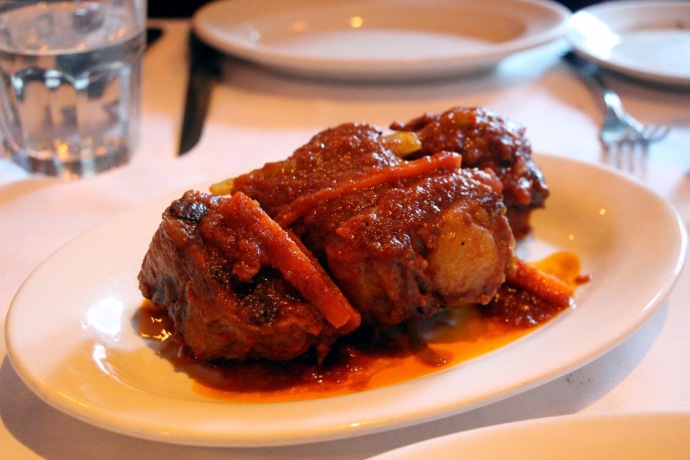 Maialino – When in NYC do as the Romans do 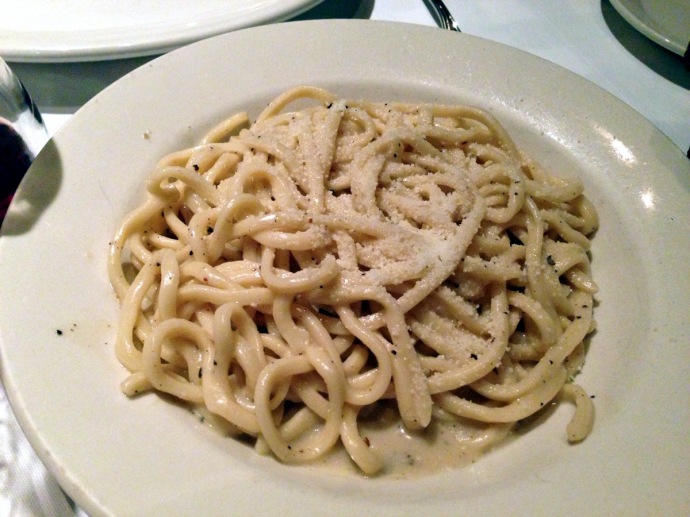 Just the other day I was giving a food tour of Hell’s Kitchen to a young couple from the Philippines, and the subject of this blog came up.  I told them something I realized lately, that this is the weirdest blog they will ever encounter as its all about eating in 3 peculiarly different places:  NYC, Italy, and Turks And Caicos, a place they were not even familiar with.  “Its in the Caribbean” normally follows (Although technically its part of the Atlantic Ocean really).  But when my wife is often busy at work with older customers and does not have the time for 20 questions she prefers to just follow with “Turkey” instead.  Its not that I had any sort of plan when I started blogging, but now over a year later I find myself trying to please 3 different audiences somehow.

In a strange way Union Square Hospitality’s Maialino in the Gramercy Park Hotel connects all 3 subjects together, at least in my mind.  With TCI becoming increasingly Roman, I finally had my first Carbonara there (In Via Veneto).  In NYC, I now have all sorts of Roman options including Lupa, and even Eataly where you can get a decent Cacio e pepe.  But when I asked on Chowhound recently where do Italians eat in NYC, I was not surprised that the answer is A) a lot of what we call Italian food, and B) Maialino, according to one distinguished Roman and Food Author Maureen Fant.

For me to come back to the same place twice in one year is almost unheard of.  But I just had to impress my Aussie friend Tanya and had to play it safe.  The only thing I dislike about Maialino is the bar area.  Its always packed with beautiful single people.  So whenever I have to pass by it quickly to my seat in the back, it always serves as a reminder that I never had much of a single life.  @NickAnderer, any chance you could give me some back door access next time.  Anyway, another exceptional meal at one of New York’s exceptional Italian establishments.

Salumi Misti – You can select 3.  We’ve chosen Finocchiona, Prosciutto di Parma, and Mortadella.  All very good with the Finocchiona (salami with fennel) being my favorite.

Tonnarelli Cacio e Pepe – Beautifully simple, simply beautiful.  Along with the carbonara perhaps my favorite pasta here.  Perfectly creamy, peppery, and addictive.  Having it sit there among the other pastas is like visiting the bunny ranch after trying out all the bunnies, and constantly picking you favorite.  Sorry you had to read this Tanya, Mrs Ziggy, .

Spaghetti with lobster – Delicious!  Not quite as sharp as the Lobster Fra Diavola I just had at my favorite restaurant in the Caribbean, Caicos Cafe led by a San Domenico veteran, but delicious nonetheless.

Oxtail – Roman style, slow cooked with tomato sauce.  Tender, falling off the fork, absolutely scrumptious piece of meat you just want to attack.  But we couldnt.  We were stuffed.  Just stared at it thinking how in the world I’m passing on this thing, reminiscing on the great oxtail we had at Cesare al Casaletto.  Nick, thanks for correcting my pronunciation of Cesare al Casaletto at the Bonci/Parla event at Paulie Gee’s

In the past we also enjoyed the terrific Carbonara (better than the ones I had in Rome), octopus app with beans, Pappardelle, and a fine Garganelli al Sugo di Coniglio (yum).  We skipped dessert this time but enjoyed the bread pudding over the more popular (I think) olive oil cake last time.  Check out Maialino boys and girls 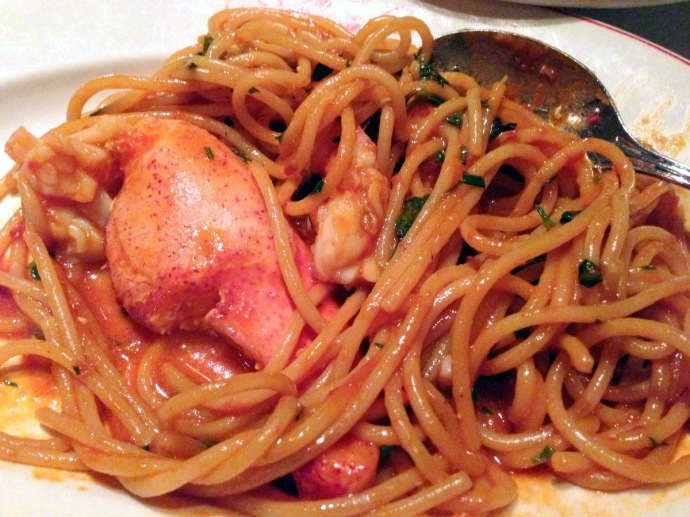