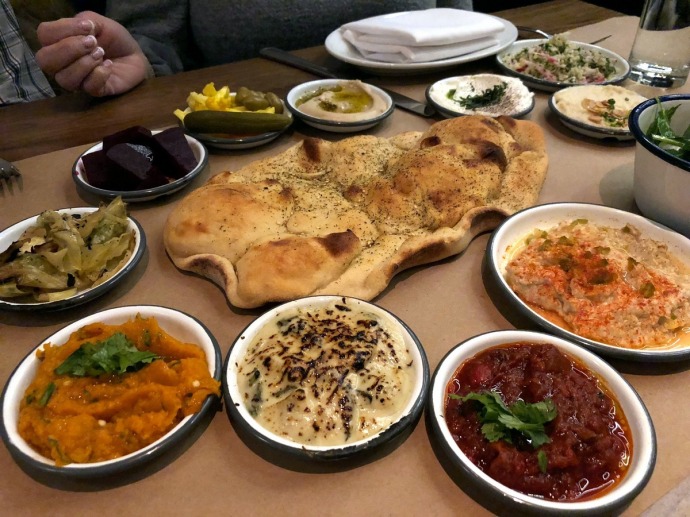 Before I visit a new place I like to spend some time perusing their website.  It paints a picture, and often tells the story.  I love a good story, but they are getting increasingly rare in corporate NYC.  Lamalo site looks like that of a typical modern restaurant in New York, with colorful images of their food, menu, and press galore.  Its always interesting to see what makes the press cut.  In Lamalo’s case, it’s seemingly every possible mention, with the majority about the anticipation and announcement of its much hyped opening. Which really means “our marketing dollars went to good use y’all”.  Not one review.  The only person benefiting from this press barrage is Jeff Bezos.

Also missing is the story.  There’s an ‘About’ section with no mention of Gadi Peleg and his accomplishments with Breads Bakery.  Instead you see a generic “modern Middle Eastern gem nestled in the heart of NoMad”.  Not sure what makes it modern other than higher prices and being inside a hotel.  Or maybe its because there’s no sign.  The concept of Mezzes served as such may be new to NYC but its been around for 1000’s of years.

Lamalo means “why not” in Hebrew, but its often used, almost like slang.  As in “What if we offer a ridiculous amount of all you can eat spreads, dips, and bread for a set price, say $25 per person?  Lamalo?!?”.  Its essentially a glorified all you can eat buffet of tiny plates like hummus, babaganoush, button mushrooms, pickles, and more.  The most memorable was Skordalia, a potato spread infused with garlic and almonds to the point that it tastes more like beans than potato.  The plates surround a “smaller than I thought” laffa that comes fresh out of the oven but dries quickly, and surprisingly not particularly great.  I’d take the Dizengoff/Zahav pita any day of the week.  Except shabbos. 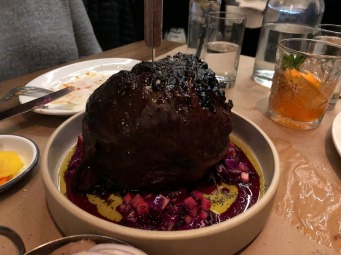 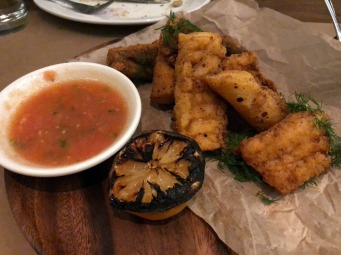 The spreads for the most part are cleverly executed, and diverse enough to keep things interesting.  There’s a certain pleasant flow here.  The problem is, in a way similar to my issue with Zahav, that the fun stops there.  Unlike Zahav, here you do have variety of large dishes to choose from, but the two we ordered left much to be desired.  A Cabbage “Shank” that was braised overnight with a sweet glaze was interesting at first, but quickly got too sweet and boring.  Its a play on Borscht that doesnt work.

Shabtai-Style Fish featured various kinds of unevenly cooked fried filets is essentially a good mother-in-law fried fish.  Its interesting that they call it Shabtai style considering there’s really no such thing, at least not globally that I’m aware.  As for the sides, the Mejadara worked a lot better than the odd tasting Ful (Fava beans) which I normally love.  But perhaps the best dish at Lamalo is the lone dessert.  A perfectly semi frozen Halva Parfait that really hit the spot.  Like a semifredo covered with shredded Halvah.

But there’s simply not enough here to make me want to come back.  Yes, its a playful concept that can be fun for groups, couples, and heck even accountants.  But tiny plates of mostly spreads and dips can only thrill so much.  You spend some time fishing for your favorites before declaring the winners, but still find yourself munching on the undesirable, because someone has to.  Like a polygamist, who got his favorites, but needs to take the others to the zoo sometimes.  But worse of all, he cant add anymore wives. 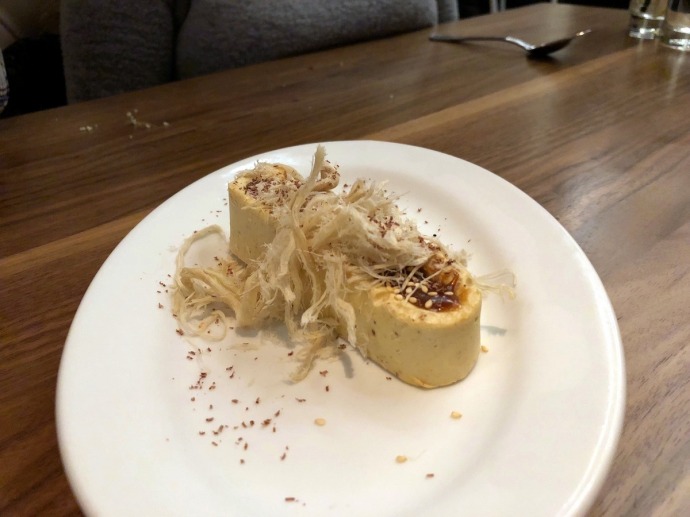