A Ducky in East Village Dishes out Killer Goat

The annual much anticipated Z-List update is coming up soon so I figured I’ll give you a little preview.  Much anticipated in my household that is.  Something tells me Jean-Georges Vongerichten is not exactly losing sleep on this.  But who knows, I may be wrong

You gotta love places with a signature dish.  And then you really gotta love places with so many “classics” on the menu, you dont even need to order the signature dish.  I was having dinner at at Vietnamese place the other day, my second time there, and I came out as puzzled as ever about its must order dishes.  While at Ducks Eatery, you salivate at the usual suspects… ribs, wings, goat neck, and after the latest mini feast, smoked duck salad, and just about the most outrageous “Rice and Beans” you’ll find in NYC. Not many do the American classics better in NYC 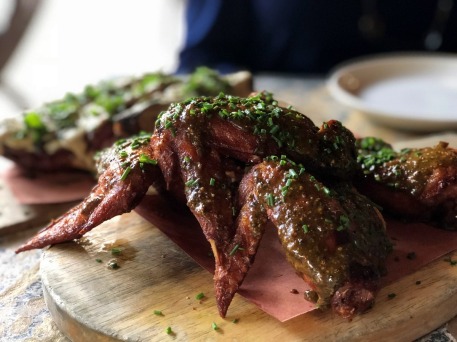 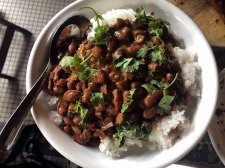 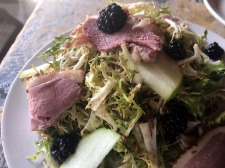 You can get goat all over the city, especially in Indian restaurants.  But Google “Goat Neck NYC” or “Smoked Goat Neck NYC” and see how many results come up.  Go ahead I’m waiting.  You will get many results, but all pointing to one place…  Ducks Eatery.  Thats because Ducks is the only place in NYC that offers it.  Why?  I’m not sure.  But one bite out of that thing makes you wonder.  Perhaps at this stage, its impossible for any chef with some integrity to add something like this to the menu without any infringement.  Its a revelation of sorts.  A level of tenderness and succulence I havent experienced in NYC, or at least not in a while.

Now, I’m not the biggest fan of Guy Fieri.  But on occasion I cross paths with him in my writings.  Perhaps to the point of “maybe I should start watching those DDD’s” ( I even forget what they stand for.  Drives, Diners, and Divas?).  So instead of trying to give this the proper justice with fancy food words like divine and OMFG, I will just refer you to this DDD clip which describes this dish and its inspiration very well.  As you see, making this goat requires 59 easy steps, a culinary degree, with a minor in economics.  It makes the price ($36) look like a robbery (where I’m the robber).  You may also want to watch Fieri in another EWZ favorite, Gazala’s Place in Midtown 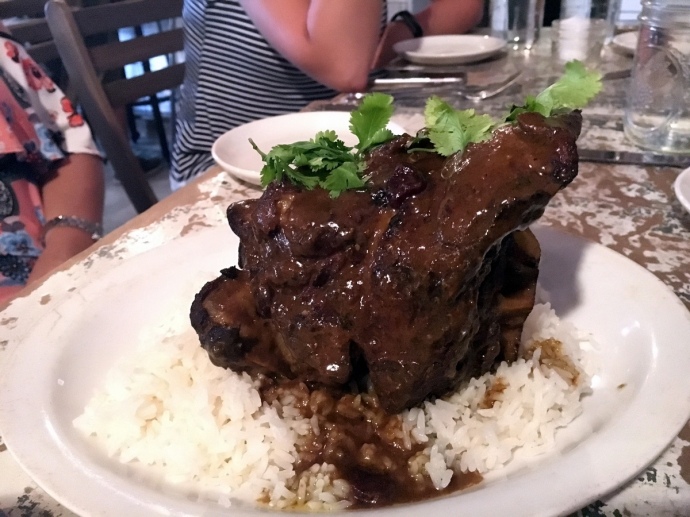 I suppose if you are a carnivore, that video is all you need.  My job is done here.  But I need to make it to at least 350 words or else its “No pastrami for you” the next time I’m at Z-List fave, and East Village tour staple Harry & Ida’s (Will and Julie Horowitz own Ducks and Harry & Ida’s).  So what should we talk about to fill the gap.  There’s apparently a front moving according to the news.  What happens when a front stops moving.  Is it still a front?  Or does it need to move by definition?  They never report on fronts that stay still, I dont believe.  You never hear “we have a front that is stuck for 3 days outside the Maryland coast”

I suppose I should also mention that the dry rubbed St. Louis Ribs here sport a beautiful red hue and would make any Texan blush (because of the East Village crowds).  And the wings here are gorgeously jerked and pepper-corned, and are going straight into the NYC Wings Hall of Fame.  We ordered another round.  This is serious BBQ folks.  But all of this including the seafood items like the fine smoked trout take on a supporting role after the most beautiful neck this side of Ibiza.

Apparently its called a Stationary Front.  Where two air masses collide and neither strong enough to move each other.  Sort of like drunk sumo wrestlers leaning against each other.  But at some point they simply fall down and get dragged out of the rink ending in a tie.  But not before they piss on themselves. 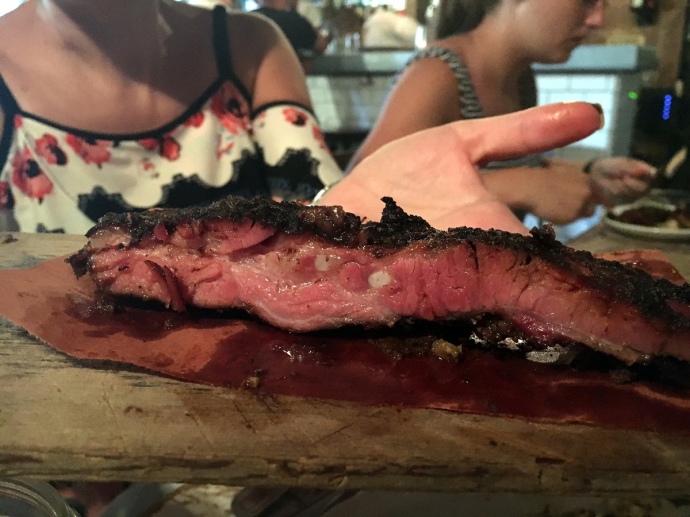 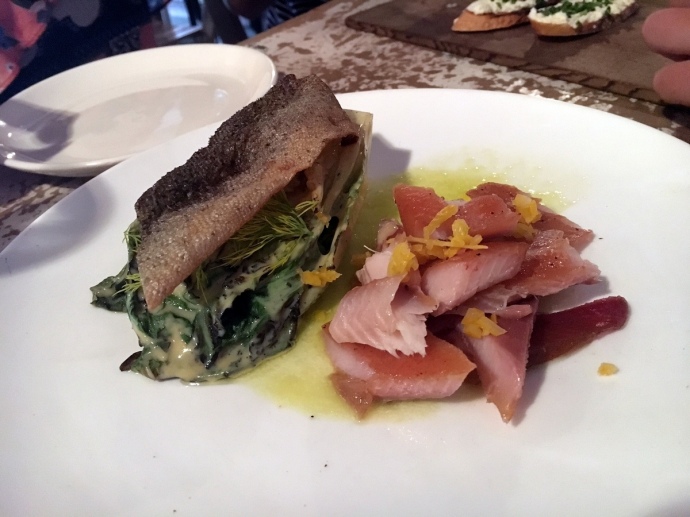 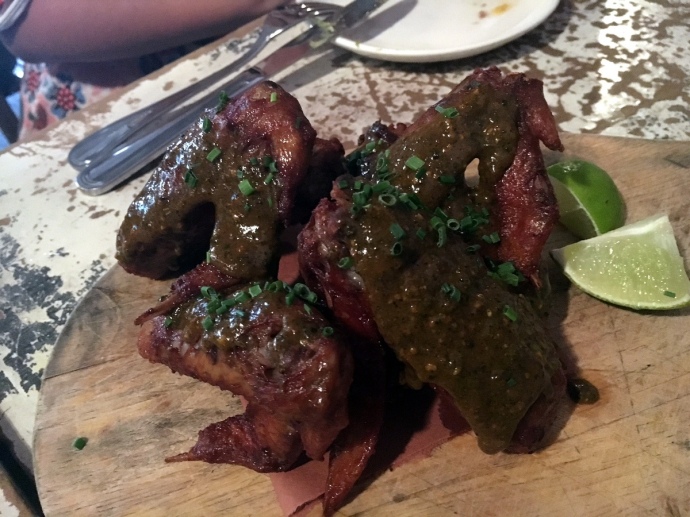 Mighty Quinn’s – A Man and his Bone 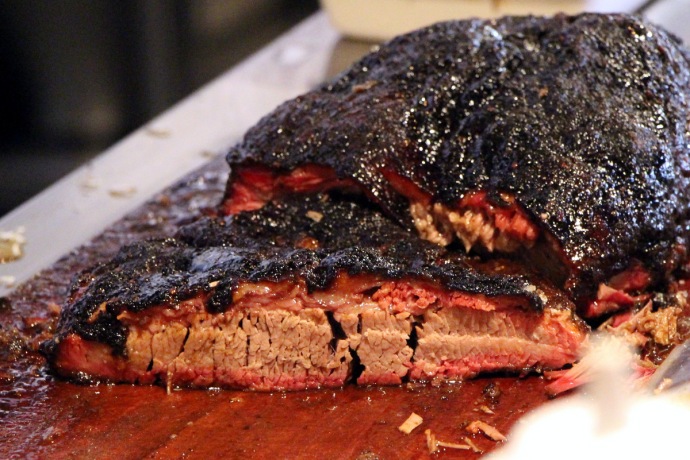 Statue of Liberty, Empire State Building, the Naked Cowboy, the woman on the C line that forgets her pants sometimes, Brontosaurus Rib at Mighty Quinn’s.  Things that remind you that you are not in Keukenhof anymore.  This is America, where you American food, cooked by Americans, in America!  The BBQ renaissance in NYC is in full force.  You simply can no longer say that there’s no good BBQ in NYC.  Try saying it… See?  You cant!

At first you feel like you need some sort of a game plan on how to share this massiveness of a beef bone.  But after a quick poke, no knives, and no archers needed.  A simple fork attack will do for this super delicate, juicy piece of meat.  At BBQ joints I normally pass on beef ribs in favor of the pig, but here my gut told me I had to fork in the $23 for this bone (by gut I mean I’ve been reading and hearing about it for a while) and the gut was right. 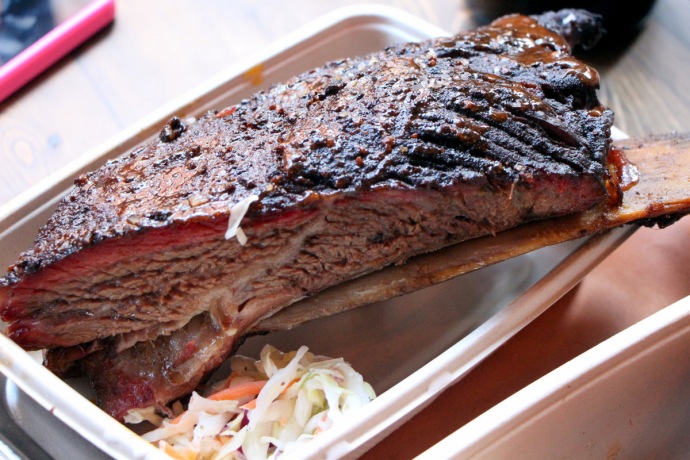 Second prize went to the glorious pulled pork which we already tasted in the Dumbo Smorgasburg.  The carver splashes their own BBQ sauce at the cafeteria like counter to give it that special depth of flavor.  Perhaps the pulled pork to beat in NYC

The spare ribs were disappointing in the sense that I only got to try one.  Why oh why they did not become vegetarian, like the cool Manhattan kids.  While missing the wow factor of its cousins, the rib was exceptional.  A delicate crust that lets the tender meat do the talking.  The moist Brisket, with all its fatty glory did not disappoint as well 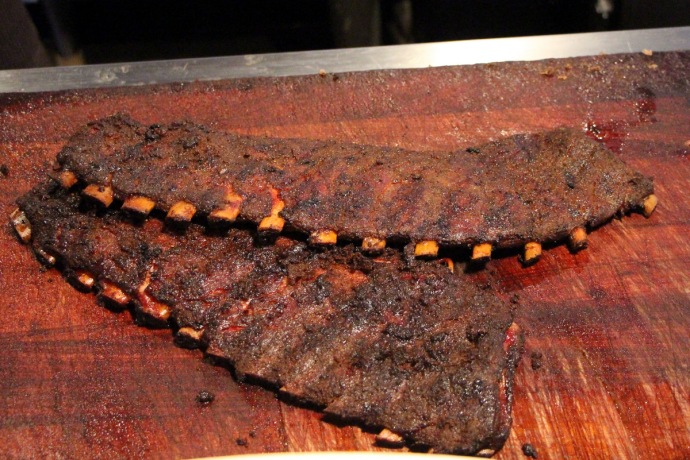 This is not the place to discount the sides.  They may look like Boston Market, but taste like Per Se.  Did you know there’s no Boston Market in Boston (other than one perhaps)?  Yes, you’ve been living a lie.  Who doesn’t like sweet potatoes? Me!  Not a fan.  But add some pecans and maple syrup and you got yourself a scrumptious little side.  The Edamame and pea salad was as good as Edamame and sweet peas can potentially get.

Mighty Quinn’s, possibly the city’s best all around BBQ, represents everything I love about eating in the East Village.  Its like a giant Smorgasbord of artisanal goodies.  Where else can you have ribs, Thai, a gay bar and Hamantash (March mean Hamantash season) at Moishe’s all right next to each other. 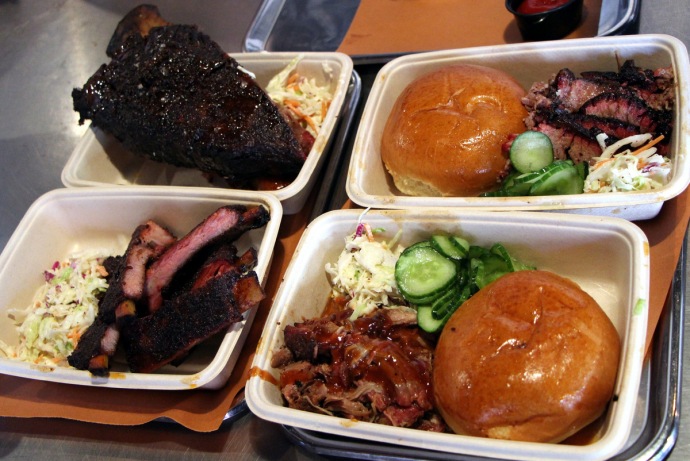 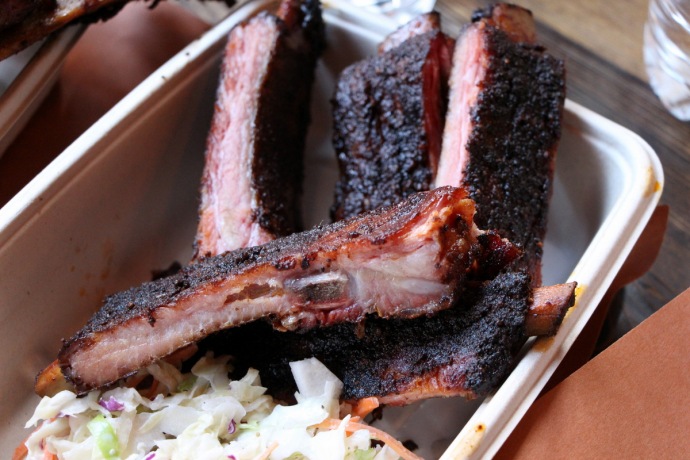 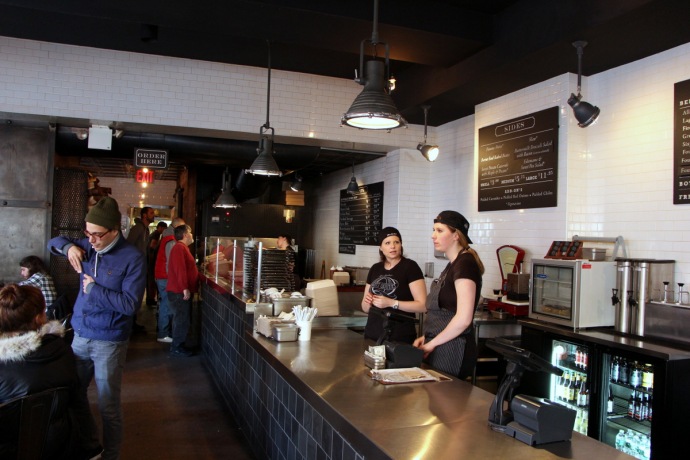 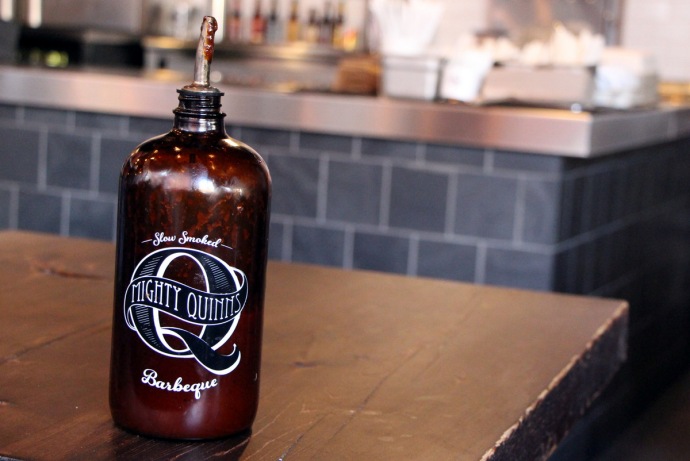