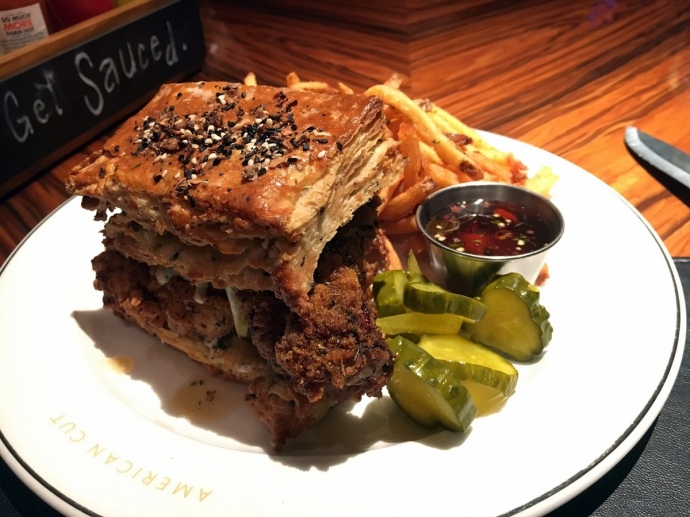 Bloggers who lunch.  Doesnt quite have the same ring to it, but holds much truth.  Bloggers love to eat, and unlike many others respect and value each lunch like their life dependent on it.  There’s nothing more disappointing than a lunch fail, or checking the hours of a hot tip only to discover they open at 6 pm.  Well, I guess I can think of a few things more disappointing (current Walking Dead season feels like the writers got replaced with real zombies) but you understand what I mean.  Talking to some restaurant owners lately, like Bruno Pizza, you get a sense that they would really love to open for lunch but just dont have the talent to do so.  Not to mention the slower lunch demand in residential neighborhoods like East Village and Hell’s Kitchen.

Even Yelp is confused on how to handle the current hours of Z-List noob American Cut, as its listing the restaurant, not the bar.  But the “Burger Bar” is open in Tribeca and it might be NYC’s biggest lunch secret.  You see for a while fellow Anguilla lover Marc Forgione and American Cut offered limited burgers at the bar.  They would send a tweet each day at 4:20 to announce how many burgers were available.  As a result, people started missing parole interviews and would forget to pick up their kids from daycare, in order to get a crack at the burger.  After day care owners complained, and local senior citizens petitioned that they cant get there fast enough, American Cut decided to convert its bar into a Burger Bar with its own dedicated menu a la a less fancy NoMad Bar.

And as you can imagine, burgers dominate much of the menu.  There’s a burger of the day, a “competition” shake shack like sounding burger (perhaps thats why its called competition), and a full 8 oz American Cut Burger.  Gotta start this new relationship with the namesake, which is a proper steakhouse burger.  A perfectly cooked medium rare patty of brisket, short rib and dry aged rib eye, with bourbon onions and beer cheese.  Beer cheese!   A common thing if you are from Wisconsin, but not so much in NYC.  Some will scold at the idea, but if the option is there to add egg, I do it even on premium beef.  This burger ranks high up there with the best of them. 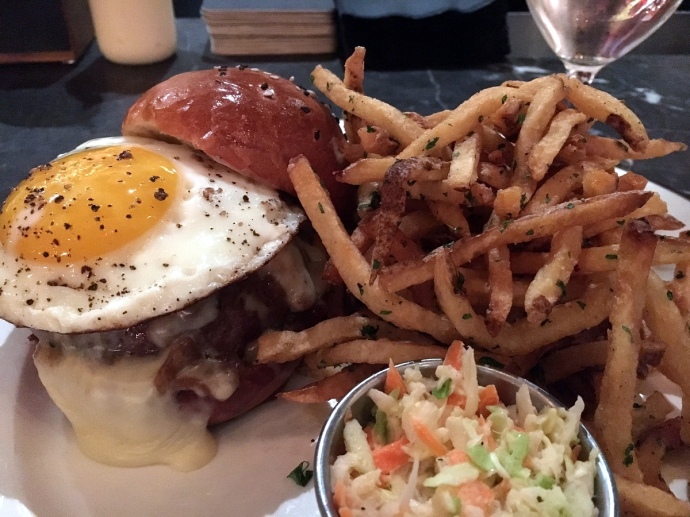 And then there’s the MFC, Marc Forgione’s Chicken which I had on another day.  Possibly the most outrageous fried chicken sandwich in a city suddenly filled with outrageous fried chickens.  Buttermilk/Tobasco marinaded, sprinkled with a special spice blend from the spice master Lior Lev Sercarz, and coated with Chili peppercorn honey which you get more on the side.  The chicken lies between two house made everything Biscuits lightly smothered with their own ranch, and pickles.  It all somehow works nicely, with the juicy tender crispy chicken leading the way.  Only caveat is that the sandwich is a little large and to eat it can be a little laborious.  But the way I see it, to fully enjoy a Marc Forgione’s Chicken, you need to work it my friend!  Ok ok, sounded funnier in my head

Another little issue with both the chicken and the burger is that the slaw you get on the side is a little too oniony (and i love oniony).  And the fries the second time around were overcooked, otherwise they can be solid.  Go! 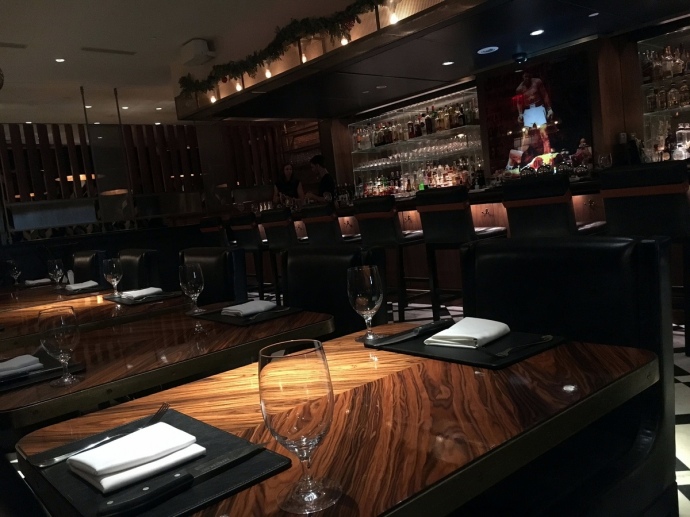 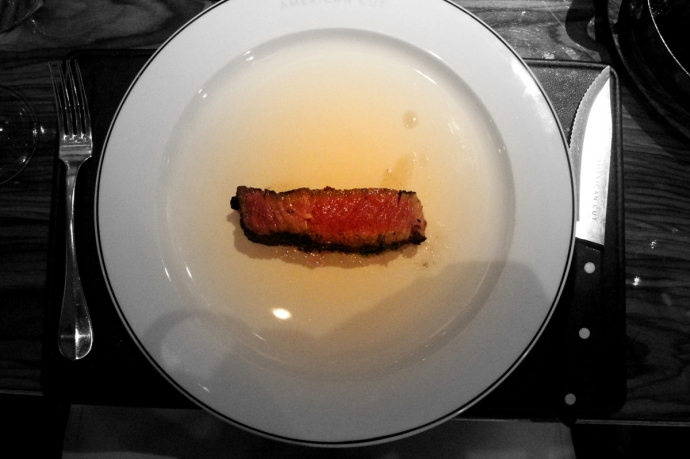 I had a strong hunch about American Cut.  Aided by clues I gathered here and there, there was enough to believe that it is one of the strongest, unsung heroes of the NYC steak scene.  When our fine Hungarian Damian Lewis waiter asked us if we’ve been here before, I suppose I should have said yes, to save the usual 5 minute spiel about the menu and its content.  I already had your signature steak, and even the chili lobster, even though I’ve never actually set foot at American Cut.  But now I’m finally here, and I dont know what took me so long.

Remember when I said “now I’m finally here, and I dont know what took me so long”?  Well, I lied!  I do know.  Living in NYC, and its ever evolving food scene can make you forget about good ole’ boring steakhouses rather quickly.  Especially those classic, old fashioned ones, where the waiters are over 60 and the clientele is even older.  The same fine dry aged cuts can nowadays be found in [name any Italian, American French, Portuguese, your uncle Bob, you name it restaurant].  Not to mention the many modern steakhouses like the fine, Z-List winner Bowery Meat Company in the East Village.  But American Cut feels like a steakhouse like no other.  Perhaps the perfect kind for those looking for that classic American steakhouse experience.

At the great risk of sounding like a Yelp review…  From the moment we entered until the moment we left, with Hungarian Damian Lewis taking good care of the four of us during, its was pretty flawless.  Long time EWZ historians will tell you that its a tough feat, as I always, I mean always find a flaw, or four.  It was just about the opposite of our recent experience at the meat experts at Quality Italian in Midtown where the flaws just kept coming and coming like erectile dysfunction commercials.  Perhaps a testament to eating in the heart of Midtown vs residential Tribeca.  American Cut felt unique.  Like old and new New York  rolled into one.  Comfortable, elegant, fun, theatrical, attentive, unfussy, with a great menu that delivers.  Flawless!

Biscuits – I’ve had worst bread that I paid for than this complimentary beauties.  Everything Seasoned, extra large biscuits with room temperature (key) buttery veggie cream Cheese.  Its the Scarpetta affect (owned by same group) where you in danger of losing yourself and your appetite during the bread course.  Save some for the salad 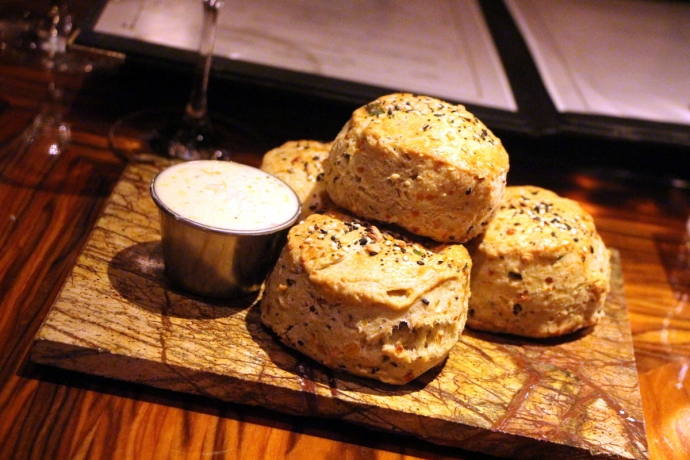 Caesar Salad – Excellent.  Prepared table side, old fashioned by your waiter, with eggs and croutons.  A fine rendition.  And if there was ever a time and place to order the Caesar, it’s here 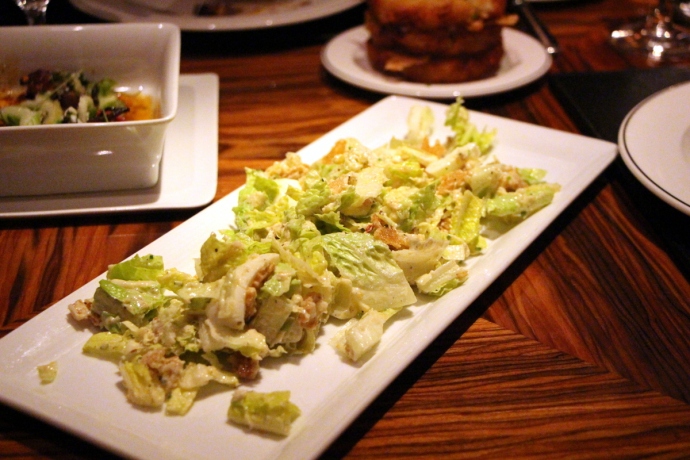 Latkes – This was a side that we elected to have a starter.  A very respectable version that would make any Jewish mother proud.  That’s perhaps the best compliment I can give to latkes.  A “bissel” heavy so be careful 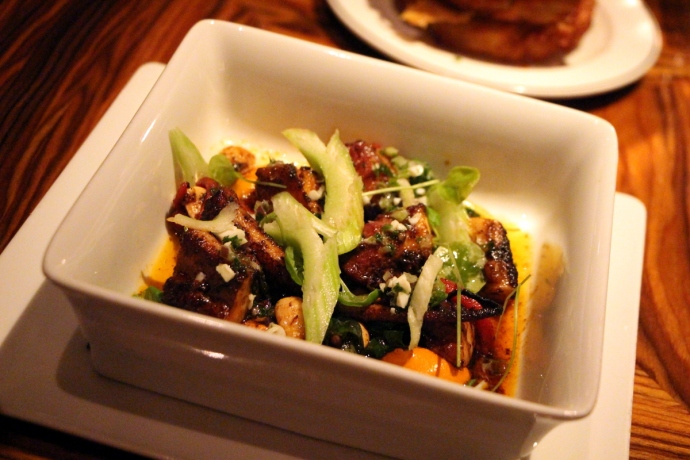 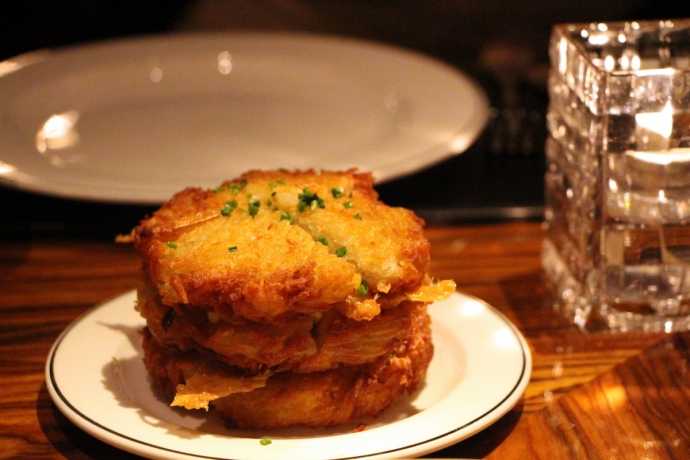 The New York City Cut – The somewhat confusingly named signature dish.  Its not a NY Strip, but a 20 oz bone-in rib eye, 30 day dry aged, rubbed with Pastrami spices.  The spices aren’t as overwhelming as one might expect.  Nor the layer of mustard seeds sitting underneath that just gives it a little more tang.  Its a nicely marbled, high quality cut that couldn’t be cooked any more perfect.  As I mentioned we already had this at half sister Khe-Yo nearby as a special.  It was slightly different (without the mustard seeds) but with similar results.  We ordered two of those babies. 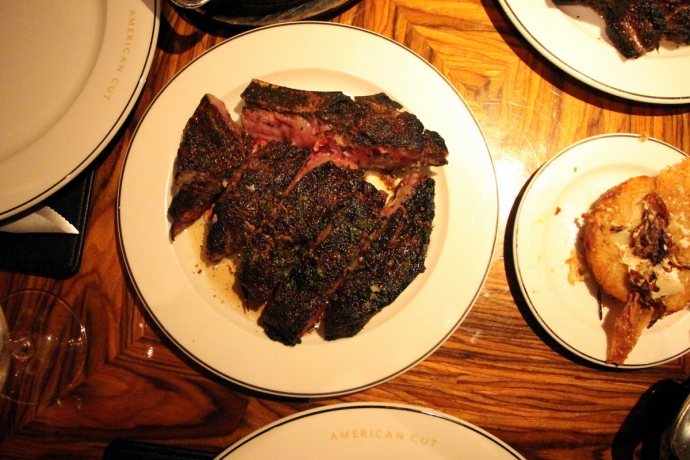 Sides – This is where I feel American Cut separates itself from the rest.  In addition to the Latkes, you got some very impressive sides here that makes ordering a little difficult.  That’s one reason you should order the latkes or something else a starter.  Unless we just hit the jackpot with the creamy, bacony “Dry Aged” thin sliced Potatoes, and the banging Brussel Sprouts infused with that spicy Khe-Yo Bang Bang sauce. 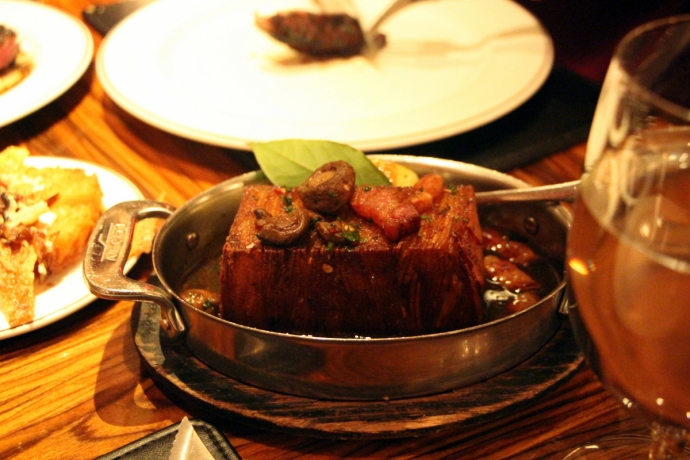 Dessert – The Crackerjack ice cream with popcorn ice cream is the undeniable crowd favorite here, but what stole the show for us was the AC Carbomb, chocolate bread pudding with boozy Jameson Butterscotch, bananas, and Guinness Ice Cream.  As I said, flawless
American Cut Steakhouse Tribeca
363 Greenwich St
$$$$
Recommended Dishes: All of the above 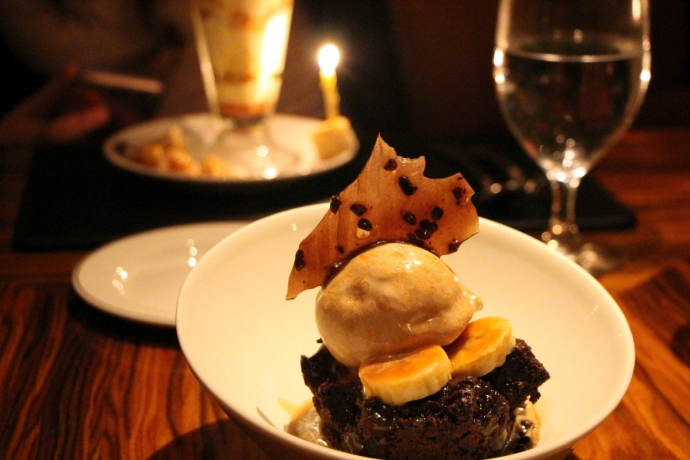