This is Scheggino (and Osteria Baciafemmine)

This was supposed to be a post about Osteria Baciafemmine, one of Umbria’s most hidden (quite literally here) gems.  But something happened during this visit.  A twist.  The kind I only see in South Korean movies.  As good as this meal was, the little village of Scheggino, with a population of 463 (we counted) upstaged the meal.  To the point that we changed plans on the last day to visit the village again.

Scheggino is a village nestled vertically at the foot of a mountain.  From the outside it may look like something you may have seen before.  But once you start climbing those narrow pedestrian streets, its like a fairy tale village.  One without tourists which is a rarity nowadays.  But that’s Umbria for you.  The unappreciated belly of Italy.  No wonder there was a wedding during our second visit.  When you visit a place this small, and there’s a wedding going on, you essentially become part of it.  We wished them a big Mazal-Tov, and sent them off with a fondue set.  I always carry one in the car in case of emergencies.

Scheggino, simply put is the most charming little village I’ve ever seen.  But there are more reasons to visit.  Scheggino is also home to Urbani, the truffle tsar, whose products can be found all over NYC.  You can visit its headquarters just outside the entrance to the village.  But even more accessible is “Truffleland” inside the village where you can participate in several rides like the “Its a Fungus after all” train ride through the mountain.  Ok, not really.  Its just a small museum and store, where you can sample the best “truffle truffles” (a marketing nightmare I imagine) you’ll ever have.

Cutting through at the foot of Scheggino is the Nera River producing one of the only seafood items found in Umbria, trout.  You can have it at Osteria Baciafemmine as is, or crusted with crunchy breadcrumbs and parsley.  Osteria Baciafemmine is a local legend, Slow Food fixture, and the reason we came to this village in the first place.  Rustic, all in the family Osteria, dishing out local specialties and meat raised in their own farm.  Mother, father, daughter, cat, all hard at work at a space decorated head to toe with food and drink stuff, almost museum like.  Toto, we are not in Staten Island anymore.

Not much English spoken at the Osteria, but the international language of food is sometimes more powerful than words.  Out of the soup offerings, the pureed chickpea soup was a standout, but the local lentils were not too shabby.  A fragrant and delicious gnocchetti with sheep meat ragu and tomato sauce worked better than the Strangozzi with truffles.  Excellent pork cooked with beer, apple and honey.  Two perfectly cooked and well crafted sausages comes with polenta topped with, what else, truffle spread.  A most memorable meal at a photographer’s dream setting. 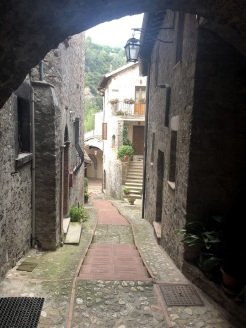 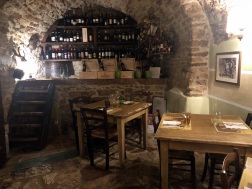 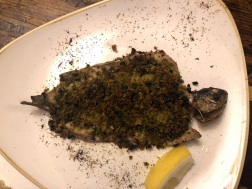 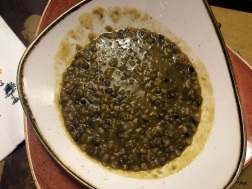 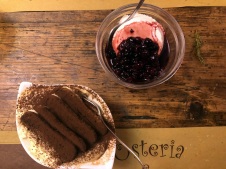 One thought on “This is Scheggino (and Osteria Baciafemmine)”