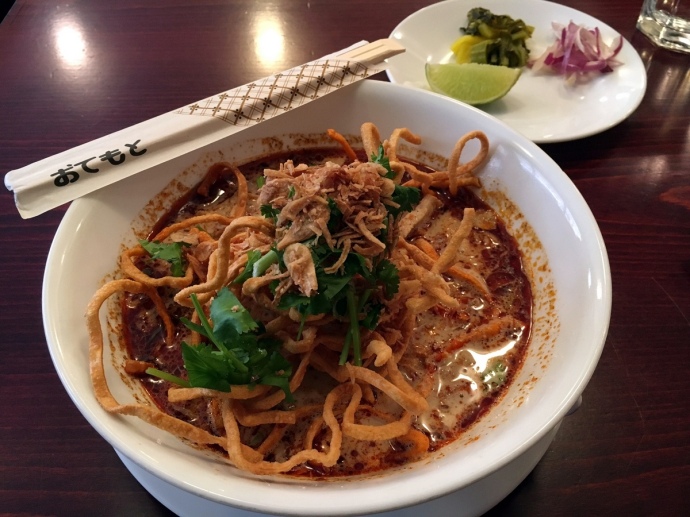 Its a tale of two Thais.  Pure Thai Cookhouse, a jam packed frat party at pretty much any time of the day, sometimes even just outside.  Pam Real Thai, eerily quiet even at peak times sometimes.  Pure has a limited, concentrated menu for Thai standards, while Pam has a megillah that includes all the color of the rainbow curries and other American Thai.  Pure is where I bring visitors to experience the vibe and some regional specialties you wont find anywhere else, while Pam is terribly unattractive and uninviting.  So why do I keep going to Pam Real Thai.

Well, for starters, for some of the same reasons mentioned above.  I dont want to wrestle tourists and locals for a table.  As local as Pure is, the number of tourists that go there nowadays increased dramatically.  I usually dont have much of a problem if I go solo as I can often get a seat on the counter facing the wall, but that means I get a seat by the counter facing the wall!  At Pam not only I get a full table, but I sometimes get an entire section all too myself.  I can spread my legs in all directions including Sharon Stone style and no one will bat an eye.  I can listen to a conversation from across the room (95% theater industry related.  Boy do they like to curse).  I can hear a lung collapse and call 911 before its too late.  At Pure I get to listen to Mandarin or French by the folks sitting  pretty much on my lap, while the rest is white noise mixed in with the bizarre but catchy Thai disco.

And then there’s the food.  Pam Real’s food can be, well.. unreal sometimes.  I’ve written much about its Oxtail soup, which inspired me to finally bring my wife and kids for a meal the other day.  That pleasant vinegary heat, and all those chunks of Oxtail which increased over the years means you gotta work it, and may even sweat a little.  But its just so damn good.  Same goes for their outrageous Khao Soi, a Northern Thai curry-like noodle soup packed with chili oil and topped with deep-fried crispy egg noodles.  On a cold winter day especially, the soups work like magic, while in the summer they can cure summertime sadness (worth repeating because its true).

I wish I could keep score of the goodies and badies (food blogger lingo) I’ve had here over the years.   The big complaint from me is that its a very full menu. Steamed Thai Dumplings here can be as good as cheap Thai dumplings or Shumai can get.  Pad Ped (red curry paste, bamboo shoot, basil, and bell pepper) with your choice of meat or seafood is always solid.  I go for the seafood mix (shrimp and squid) when I feel particularly naughty.  Same goes for the rest of the sauteed lineup like Crispy Pork With Basil, Pad Prik Khing (curry paste, long bean and lime leaves).  For the most part these guys are not shy with their spices.  There used to be a time when my go-to Thai dish was Pad Kee Mao (drunken noodles) everywhere and Pam’s seafood Kee Mao was head and shoulders above everyone else in this Thai rich hood.  The generously crabby and excellent crab fried rice is another must get when you are sharing.

Crispy fried whole fish is one of those things I rarely order at Thai restaurants because its usually almost purposely overcooked, albeit liberally spiced and herbed.  Here you can have your Red Snapper or another fresh fish a number of ways.  I dont recall the name we tried, but it was smothered with a mild sweetish chili sauce, almost like a mild red Yemeni S’chug.  While we enjoyed it I dont know if I would spend another $28 on it again. The irony here is that I prefer “Thai Style Fish” at menus in non Thai restaurants, like Cull and Pistol.

Pam Real is a solid go.  Dont worry about looks and reviews (very full menu + delivery = reviews all over the place).  With Thai restaurants in Hell’s Kitchen especially looks can be deceiving.   If you want beautiful chandeliers, go to Room Service.  For good honest food, go to Pam. 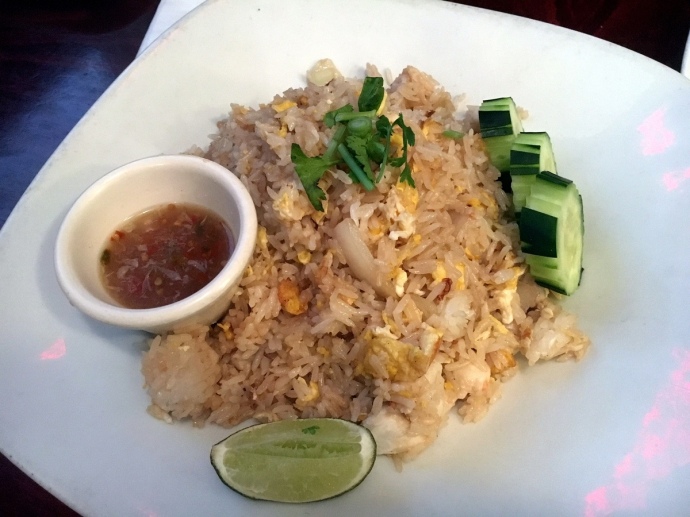