Atoboy is the newest Korean bad boy in the NoMad, an area that started to feel somewhat stale as of late (New Mercato sibling Ulivo will be next to check out).  A Jungsik alum introduced a whimsical menu of Korean Banchan, small tapas like dishes.  A set price of $36 allows you to choose one dish from three sections. One can add more a la carte ($9, $12, $15 respectfully) and dessert which I recommend here.  Decor as you can see is Industrial Bushwick Chic.  I totally made that up, but you bought it admit it.  Not something you normally see in the increasingly elegant purse-bench filled NoMad hotel zone

A friendly waitress guided us well throughout.  Only issue is something that haunts us in just about every tapas like joint, but got elevated here.  A constant flow of arriving dishes.  You eat non stop here, and within an hour you are pretty much done.  For $160 for two that included tip/tax, two Gruners, two desserts, an extra small plate, and $2 upgrade to seasoned rice (yes!), I was expecting to linger a little longer with my date.  I will break the food by rounds, and list my favorites at the end as well

First round – We ordered an extra dish here, the Cobia, served raw, finely diced and mixed with Korean pear, hockey puck tartare style.  Nice combination of textures and flavors.  The least exciting of the early three was surprisingly the heavily Instagrammed beef tartare, a Korean style tartare, thinly sliced strips instead of finely chopped which is my preference.  The “Eggplant “on first glance looked like a babaganoush gone horribly wrong, but resulted in the best dish early on by far.  A spoonful of the layers of eggplant, Dungeness crab and tomato jelly led by that smoky eggplant was pure ecstasy

Second round – I was a little bored with the “Egg” with Sea urchin, Watercress, Quinoa.  The egg white was in charge throughout and needed something more.  Far cry from a similar egg dish at the NoMad (not fair I know) nearby.  The meaty Jerusalem Sunchoke was more like it, with Oyster mushroom, Black truffles, and Orange.  One of the better dishes of the night

Third round – Fried chicken tempura style with peanut sauce featured a good amount of tender, juicy, delicious meat.  Looks greasier than it actually is.  Mrs Z wasnt as much of a fan though to be fair.  The Brisket with Foie gras infused gravy and more Oyster mushroom looked and tasted like a sick meat stew.  A solid dish, but one of those where the main ingredient (unevenly tender meat cubes) is the least exciting thing there.  Love the garlic chips, the sauce, the mushrooms, and once I started dipping the mushrooms from the Sunchoke dish, I almost wet myself.  From the sauce that is.

Dessert.  A tale of two desserts. Panna Cotta with frozen pomegranate was outstanding.  Its all about the cookie crumble in the middle tying everything nicely together.  Black Raspberry Cake was just like a fine pretty cake you get at your corner pastry shop.  Should have tried the Granita with walnuts and burrata.  Go! 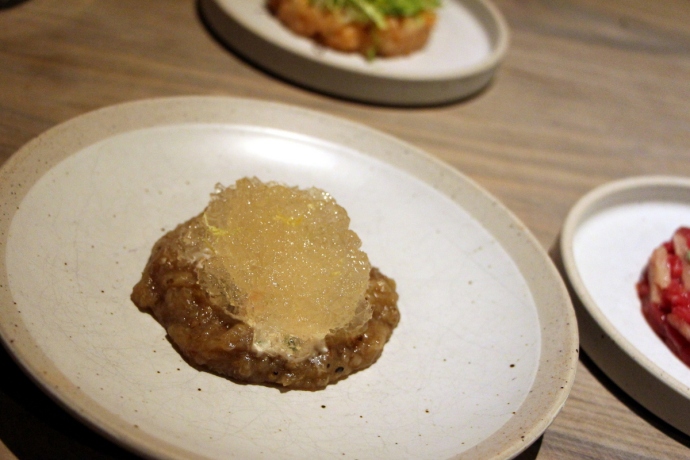 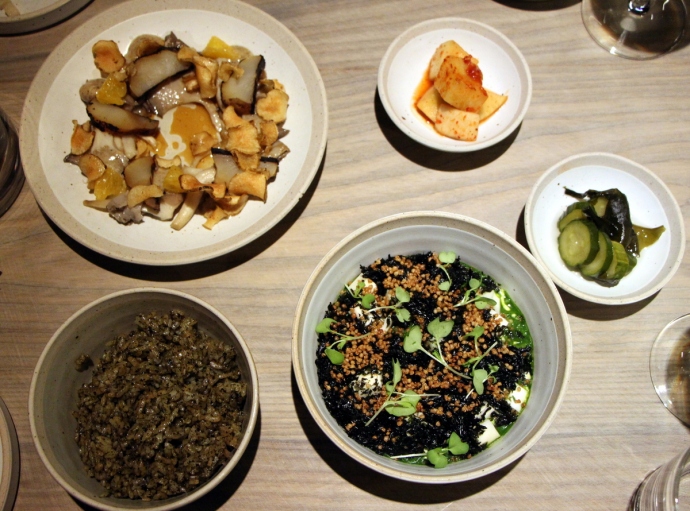 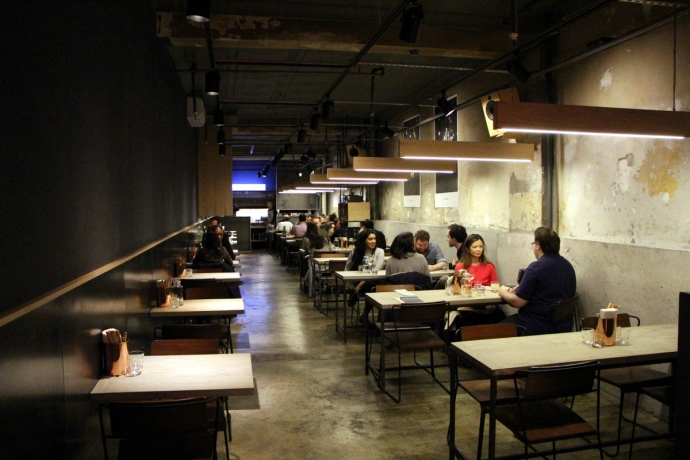