Simone’s (Provo) – Dishing Out the ‘True’ Fish and More

Coming to the island this time without my big boy camera felt weird but liberating.  It was also a way to say, “we are just going to our other home, and dont get overly excited anymore”.  And at that other home, one of the missions is to find the homey places where everyone knows your name and  your kids can run around naked.  As long as the food is a full notch above acceptable of course.  Simone’s is becoming that kind of place.  On our last dinner there we were the only secondary homeys there.  A bunch of locals hugging the terrace, including my favorite kind of locals, fishermen.  Two of them in fact.  Would local fishermen dine at a place serving frozen fish from Miami?  Would Urologists get Vasectomized by B grade Urologists?  That is the question one must ask.  Although on this date, as was the theme this week, Wahoo was the catch of the day, but boy was it good.  A beefy consistency as expected, without crossing the dryness line as Wahoo often does.

I would come back just for the Wahoo.  But not without the “Conch Ceviche” first which is essentially fancy for Conch Salad.  With its heaps of fresh veggies and heat, this may be the closest to Seaside’s Peruvian conch salad (RIP) today.  Here you also control your own destiny with an extra spoonful of Scotch Bonnet hidden below the lime.  The Seafood Chowder is another great one to add to the ever growing list of Island chowders.  This is a light, well balanced, full bodied white with delightful fishy notes.  The fine lobster, and curry snapper again, rounded another fine meal at this Three Queens of the resorts area.  Certainly not for those looking for full service, consistent, finer dining. Think of it as an easy going, eating at aunt Betsy type of place.  Except in this case aunt Betsy can flat out bring it.

You can say we waited well over a year for the chef to show up.  Back in 2014, we sat at the foot of mount La Vista Azul waiting for the chef of ‘The Wave’ from the team behind Ricky’s Flamingo’s (only one member so far:  Ricky).  “She is coming, stuck in traffic”.  where is this traffic, Miami?  We waited until the house ran out of Bambarra Coconut, and left to Chinson’s.  Fast forward to December 2015, the place is now called Simone’s, and the head chef, coincidentally called Simone, is actually in the kitchen, not Miami, not Sunrise, not downtown Provo.  Four months later, Simone is cranking out award worthy conch salads, fresh Groupers and Snappers.

As of this writing, Simone is in no man’s land on Trip Advisor.  By the time you reach Simone on TA you either reach behemoths like Asu on the Beach, and Mookie Pookie Pizza Palace, or get finger tendinitis.  After spending some time with her, I dont get the sense that Simone is too worried.  Unlike some of her fellow counterparts, she is not going from table to table asking people to write TA reviews, nor she and her cousins busy injecting fake ones.  She only care about two things:  What people like, and what people dont like right now. 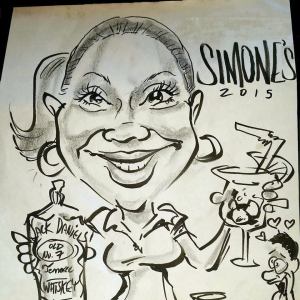 This is Simone’s first restaurant.  But with over 15 years of cooking experience, including a long stint at nearby Sharkbite, she’s no stranger to the Provo restaurant world.  Simone has friends with benefits…  Fishermen!  One of them was sitting by the door, just watching the world go by (I apologized when I walked by).  ‘True’ Fish like freshly caught snappers and groupers can be a luxury at places like this.  In the last few years fishing in Provo has been severely erratic due to changing weather patterns and government regulations in favor of sustainability.  Even before all this, getting the correct fish that is listed on the menu has been a crapshoot everywhere.  Ever wonder why that Grouper ‘Special’ you’ve been enjoying at Caicos Cafe and Three Queens is completely different than some of the other places you tried.  That’s because it is.  That’s either Swai or Tilapia you dealing with, with the former resembling the grouper more and an upgrade in taste and texture over the Tilapia.

Simone does not only promise to serve the proper fish, but will also tell you if its frozen.  Location, and the the number of expats/locals frequenting Simone in the early going, suggest there could be some legitimacy to those promises.  Location is significant driving distance from most resorts (significant in provo = more than 5 minutes), off the road, without any views of oceans or sunsets to speak of.  Meaning the goal is for the food to take center stage.  Another good ‘local’ sign is the plethora of rotating daily nightly specials like oxtail stew and Goulash!

So far so good on the food front.  Other than the uneventful, dry ribs, everything we tried was solid.  The conch fritters (the falafel of the sea) were light, just crunchy enough, and missing some of that greasiness you find elsewhere.  The jerk wings were basic but satisfying.  The curry snapper here can give Flamingo’s ‘Grouper’ a run for its money.  Fresh, perfectly cooked flaky snapper, with thick mild green sauce with onions and peppers.  Flamingo’s got the sauce, Simone got the fish.  Combine them together and you got the cure to summertime sadness.

Mrs Z is not particularly fond of the conch salad/ceviche in general but tries them all (not by force) like a trooper.  So when she declares “the best conch salad on the island”, everybody needs to pay attention. Spicy, tender, without the chewy rough stuff you normally find.  Simone simply removes the not so tender parts.  Some of the conch was as sweet as summer corn.  And she provided some scotch bonnet salsa on the side for the white folks to add more heat as they please.  Go! 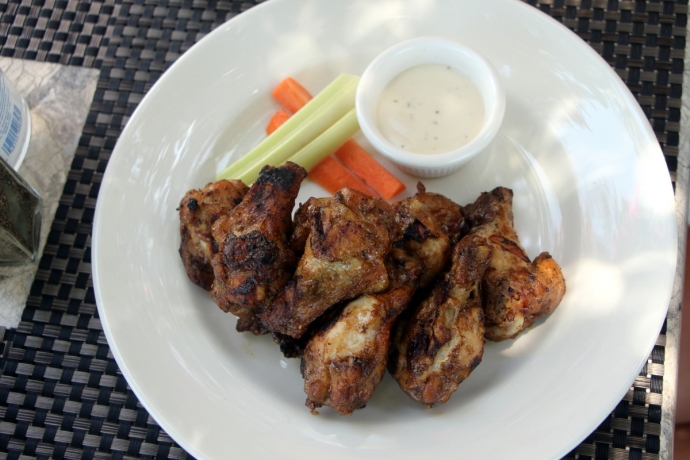 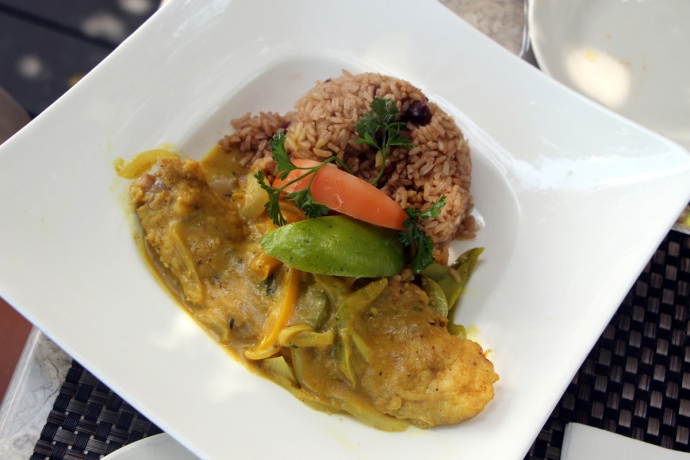