I love Valentine’s Day.  The Vermont Teddy Bear, 1-800 Flowers, Viagra/Cialis commercials are in full swing.  Roses of every color sold everywhere.  Macy’s perfume girls are out in full force.  Restaurants offering heart shaped pizzas, and special Valentines Day menus.  I love it because I don’t have to do and see any of this.  These days I’m given special instructions, sometimes written, of exactly what’s expected of me.  And I execute those instruction in the best possible way I can.  “Throw out the garbage”, “Take the dishes out”, “Call your mother”…. stuff like that.  I was told it’s called “Communicating”.  Another reason V day isnt that special in my household is that it happens to be my youngest’s birthday.  In your face Hallmark.

BTW, did anyone else notice that the Vermont Teddy Bear is getting bigger and bigger.  This is so bizarre, that it almost looks like an SNL commercial.  I cant even begin to imagine the look on her face when I bring one of these home.  Who gets to go first out the window.  Me or the bear.  Most likely bet it’s the bear, with me stuffed inside it.  I might as well bring her a small container full of ants hovering around a severed finger.  It will result in just about the same reaction.

Back to Emprio.  Oh, we havent even started.  Emporio does two things well – both of which combine to about 35% of my body mass.  Pizza and Pasta.  You see me write about places that do pizza well, and places that do pasta well.  But very rarely I come across a place that not only does both, but does both well.  The “Romancing” also stands for Roman.  And while I dont quite see those classic Roman “Cucina Povera” pastas like Carbonara and Cacio e pepe on the current menu, I dont particularly mind.  In NYC, they open them, and slowly adjust to the demand and neighborhood.  So a Sicilian place today, may not be so Sicilian tomorrow.

But the pizzas at this Aurora group owned were Roman alright.  As usual I like to start any pizza relationship with the Madame, Margherita.  And here it is a fine rendition, with quality raw materials including fresh Buffalo Mozzarella sitting on that wonderful Roman style super thin crust.  Same kind of promise followed with the Emporio Margherita which simply adds Prosciutto di Parma to the basic.  The pies, although thin, are not Matsoh like as in Marta’s house, but when the dough is as delicious as this, I’m more than ok with this.  The Spicy Sopressata featuring fior di latte mozzarella was a ok.  Sopresatta not quite as refined as others (eg. Don Antonio).  And it wouldnt be a Roman pizza without a Roman pasta disguised as pizza.  Here you got a fine Gricia, with Guanciale, Black pepper, provolone and pockets of fresh ricotta that you smear on other slices.  Nicely done. 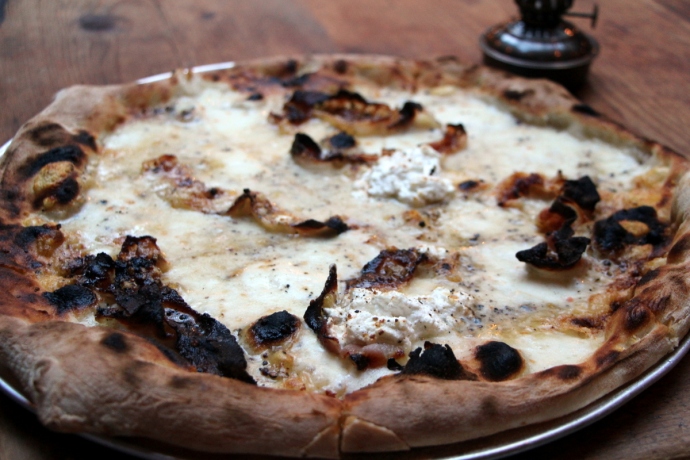 Pastas may have been specials on this V Day, led by the outragously delicious Gnocchi alla Norcina.  Parsley green Gnocchi mixed with Porcini, house made suasage. more fresh ricotta and the kicker… crushed Black truffles.  Albeit not exactly like “shaved”, its rare to see pastas with black truffles priced the same as truffle oil.  More of that black truffles but not as defined can be found in the terrific Raviolacci.  Pierogie like ravioli filled with ceamy burrata and topped with brussel sprouts leaves.  The seafood Taglierini, while good, did not posses similar flavor explosions.  Perhaps a little more of that Calabrian Chili or something to balance the “one noteness”. 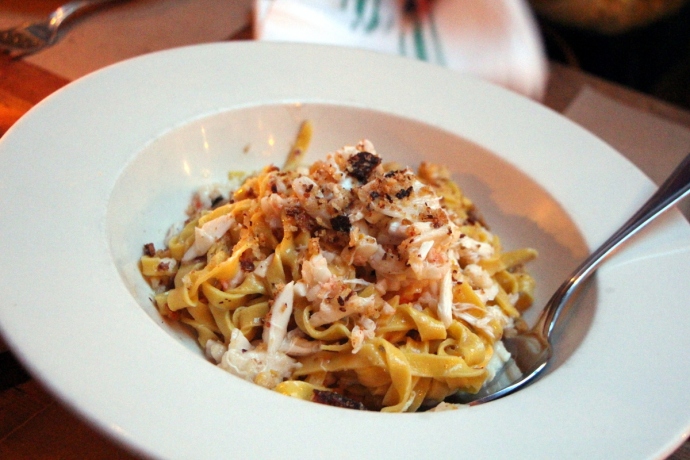 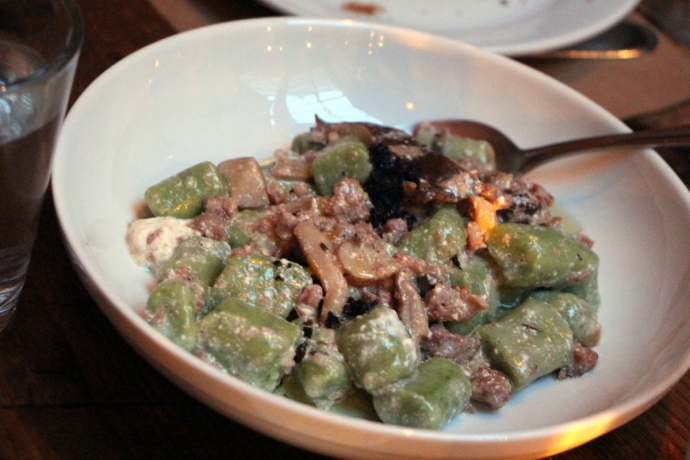 3 thoughts on “Emporio- Romancing the Stove”