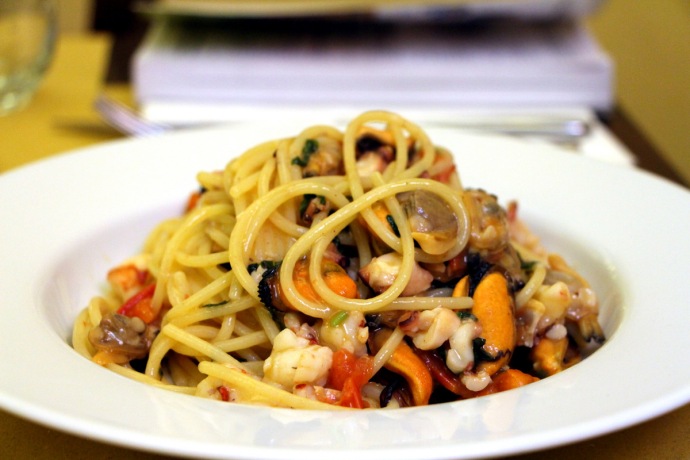 Reports of the seafood demise in Bologna may have been Sale Grossly exaggerated.  You like it?  I thought of that line while shaving this morning, which is were I do most of my deep thinking.  Whenever I say that for some reason the usual reply is “You should think about growing a beard”.  With a beard not only I would not be mistaken for Russell Crow anymore, but I would also be single and unemployed.  My full time job involves solving software related issues and very often the solutions come to me when I shave.  It also helps me with the various daily First World Problems like figuring out where I left my iPhone, what to have for lunch, who really shot Jr, and why are my shoes wet.  Turns out the shoes were wet due to exhilarated excitement of some nieces and nephews playing hide and seek in the closet the night before.  Yes, they get excited and they pee in your shoes.

Also during shaving I normally devise the all important action plan of where we’ll be eating seafood on our next trip.  We normally find ourselves craving seafood at some point of any trip, especially in Italy, regardless of our proximity to the sea.  La Tellina in Sienna was a nice find last year, while Le Mani in Pasta in Rome was less successful but hit some marks.  In this case, I figured after a week of heaviness in Piedmont and ER, Bologna would be the place for seafood, and all signs pointed to Sale Grosso.  Hidden in some alley in the university area, and with some locals never even heard of it, the “hidden gem” cliche comes to mind.  In fact some locals even turned up their noses at the idea of eating seafood in Bologna

I don’t mean to set you up for another feast as it actually turned out to be a rather light lunch, at least for our vacation standards.  Burratina (Burrata) with Bottarga (salted dried tuna roe “sticks”), shockingly good, and grows on you as you are nibbling on it.  Bottarga is not something you normally see on NY menus.  The Burrata was oozing with richness and went very well with the salty dried tuna, and the olive oil used was especially noteworthy.  Octopus, simply grilled, tender and absolutely delicious, arrived with some of the best tasting grilled veggies we had on this trip.

Rolled breaded fish stuffed with raisins, pine nuts and other unidentified objects came with expertly cooked Broccoli Rabe and creamy tomato water. Perhaps the dish of the day, which included a very nice dinner later on.  Spaghetti with Seafood was perfectly al dented with generous amount of fresh shellfish and fish. This is what every basic Spaghetti with Seafood should taste like.

Smiling, friendly owner, slightly overdressed for the occasion, unless we all were underdressed.  Wife who wasnt there is the brainchild of the Mediterranean inspired menu.  She’s from Bologna but with southern roots.  And the cook during lunch was from Puglia where some of the lunch dishes get their inspiration from.  Nice and comfortable room, popular with locals and nearby university students and staff.  Looked like we were the only tourists there.  While the lunch menu showed plenty of market freshness and creativity, during dinner things pick up a notch.  Check out Sale Grosso guys

Now if you excuse me I need to go shave in order to figure out what to wear tomorrow.  Ciao!