When in Barolo.. You do Grissini 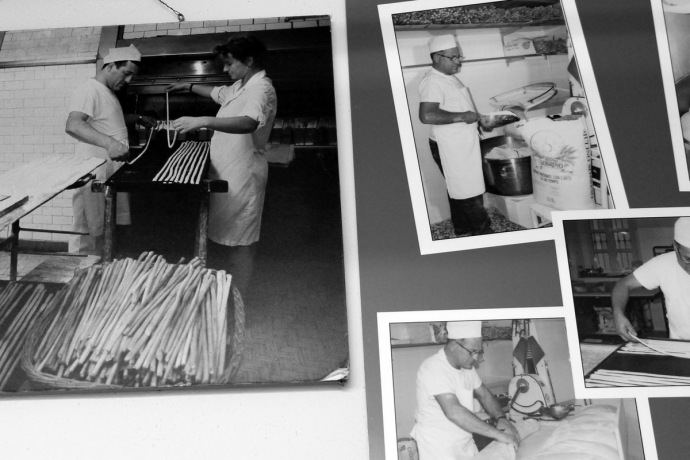 Barolo, arguably Italy’s grandest, most celebrated wine, is produced in the magnificent Langhe Hills in Piedmont.  Visitors from all over the world flock to the Barolo zone, and the picturesque hamlet that bares its name to see where the magic is made.  You got the wine museum, cork museum, wine tasting galore in every corner, wine, wine and more wine everywhere you turn in the entire region.  You arrive through Barolo vineyards, leave through Barolo vineyards, and make wrong turns on purpose as you drive through more vineyards.  So naturally, here we are, flying 4000 miles from NYC to Barolo, risking our lives while maneuvering our little Fiat up and down mountains through regional roads built for smaller Fiats. All that for.. you guessed it… Breadsticks!

Before the trip I arranged to meet with Daniela Cravero, who along with her brother and son, operate an artisanal breadstick bakery, Fratelli Cravero, smack in the middle of the town of Barolo.  Its a tiny little village of 700, and something tells me the Craveros would be happy to teach anyone without any special appointments.  But before I begin to tell you about this little jewel, I need to explain the importance of breadsticks to Piedmont and Italy

The story begins just like many other food stories begin… with constipated leaders (Like David Ben Gurion leading to the invention of Israeli Couscous).  It started in 1675 with the young Victor Amadeus II from the House of Savoy who was suffering from all sorts of digestive ailments.  His mom asked the court physician if there’s anything he can do, and the physician recalling his own digestive issues as a

child, remembered his mom feeding him some sort of cracker.  So he then asked the court baker (How do I get one of those – Craigslist?) to produce something similar that is fully baked and voila!  The breadstick is born, young Vito poops regularly and becomes king of Sicily, then king of Sardinia, winning some key battles.  You could say if not for breadsticks Italy would have been part of Austria today.  Another duke of Savoy was addicted to the stuff, not so much to eating it, but crushing them with his hands while watching opera.  Must have been extremely annoying to the season ticket holders right next to him.  Even Napoleon upon discovering Grissini, set up a special UPS service to ship them from Turin to Paris daily.

These days, step inside La Torre in Cherasco (above) and the first thing you notice is not only a bouquet of Grissini with other bread occupying the entire side of your table, but the same setup on every empty table (empty because you are a tourist eating before everyone else, partly because you are terrified of your GPS and its pitch dark terrifying shortcuts).  No flower bouquet can compete with this welcome, or as yummy.  The same Grissini then follow you all over Piedmont tables and well into Emilia Romagna.  The tradition is as strong as a Barolo.  While here in America the closest we have to any sort of breadstick tradition is that of Olive Garden, who bastardized the breadstick just like we did with the Bologna, Alfredo sauce, and everything else Italian. 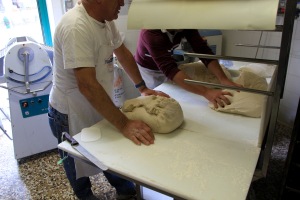 The process at Cravero, the areas only Grissini maker, starts early with the dough preparation.  The kneading, the mixing with hazelnuts, rosemary, hot peppers, or other carefully selected ingredients as the Craveros have been doing for the past 35 years.   We witnessed them prepare the bulky strips, applying the final touches to form the correct density to prevent any bubbles during the rise.  Then.. long lunch, coffee, manicure, nap Italian style, letting the dough rise and do its thing for four hours.  After that the dough is flattened and fed to a machine which produces the small strips which are then easily hand stretched before its bake time.  All that in front of drunk onlookers fresh from their wine tastings, peeking through the window. 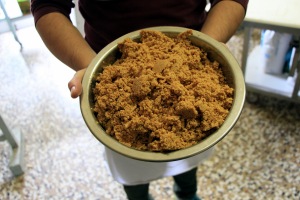 Actually, there doesnt seem to be much rest for Daniela and the boys.  The store is not going to run itself, the exquisite truffles Daniela showed us, will not smell themselves, and there’s more baking to be done.  Traditional hazelnut cakes, cookies, “Floglie” crisps, and Tajarin pasta.  We were particularly fond of the crispy “Maize Biscuits” which we are still enjoying at home 3 weeks later.  Cant make it to Barolo?  You can find some of the products throughout Piedmont, Emilia Romagna, Lombardy shops, and in popular local restaurants like Villa Tiboldi, and the Slow Food darling Consorzio in Turin.

The legend of the Grissini is alive and well, and the tradition can be felt in Barolo and throughout Piedmont.  Whether the story of young stud Amadeus and his determined mom is true or not, here’s to Grissini, and here’s to all the moms out there. 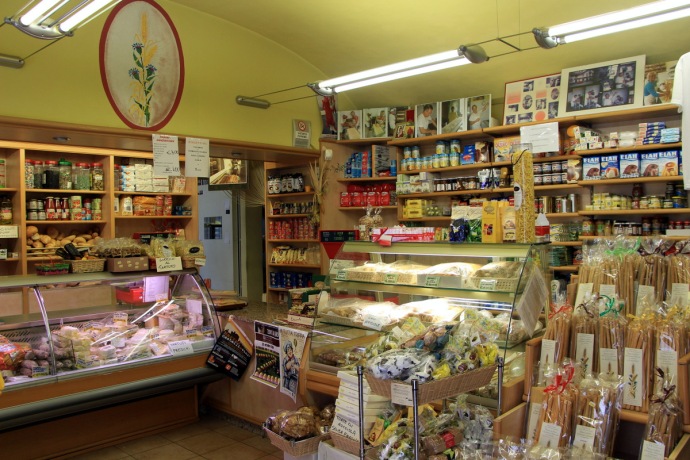 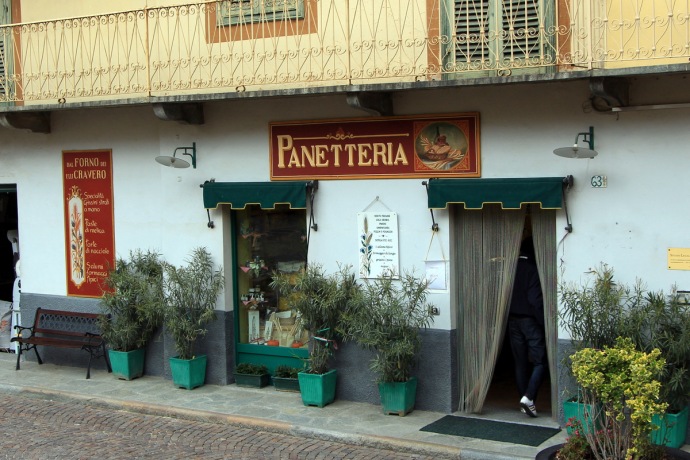 2 thoughts on “When in Barolo.. You do Grissini”