Lower East Side for Meshugenahs 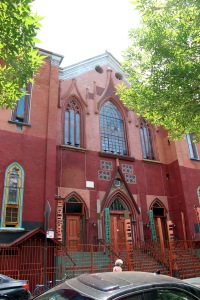 To continue our Meshugenah series we move over to the Lower East Side, a neighborhood rich with Jewish history.  When we parked our car we couldnt help but notice this beautiful red church right in front of us on Norfolk street.  However, by the time we came back to the car for the all important shoe change (women schwomen you know what I’m saying?), the church transformed into a synagogue, after overhearing a tour guide stationed with a group right by our car.  Evidently German Jews built all sorts of modern looking synagogues in “Little Germany” as it was once nicknamed, and some of those synagogues have been designated as historic landmarks by the city

In fact the entire Lower East Side neighborhood has been added to America’s Most Endangered List by the National Trust for Historic Preservation, who is suspect #1 in the case of Mission Chinese closings by the way.  Is it too late for Lucca style Kebab Laws?  Most likely.  But something tells me the Jewish identity will remain in the area for a while.  That something is the guidebooks and tour groups flocking the area.  You cant walk a block in there without a “And this place here is home to New York’s best Knish, but their Gefilte Fish sucks”.  Our food focus on our annual father’s day (delayed by a few weeks this time) neighborhood crawl wasn’t particularly on Jewish food, but it did start out that way…

Russ and Daughters.  Our only iconic stop of the afternoon was at this 100 year old legend.  I’ve enjoyed those sandwiches before, but not my family.  The new R&D café had a 90 minute wait so we settled for taking a number at the original which turned out to be a 45 minute or so wait.  Silky smooth, rich Scottish Salmon with cream cheese is as good as it gets.  Unless you get the same Salmon rubbed with Pastrami seasoning with onions.  Great stop at this old timer appetizer (an old NYC originated term for such Jewish places) that involves a little bit of pain.  But if you have a low pain threshold, consider the following lox stop, with less of the hoopla, and much of the flavor 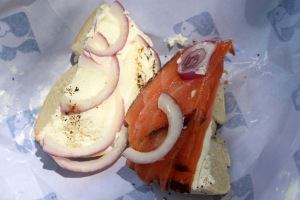 Nordic Preserves Fish & Wildlife Company at Essex Market – One of the most talked about sandwiches on the forums is the Nordic…  Nova Scotia lox, black lumpfish caviar, some onions, dill, tomatoes, capers on a Ciabata from Pain D’Avignon, a high quality French bakery also in Essex Market (some of the best baguettes in town).  An outrageously delicious, high quality sandwich cheaper than the R&D sandwiches.  Nordic Preserves is unlike anything you will find in NYC, selling all sorts of imported Scandinavian items from candy to jams, caviar, game meat and more.  As hidden gem as it gets in NYC

Schapiro’s – We then needed a rest after all that eating and stumbled upon this nifty looking bar.  One quick glance at the menu and.. Jewish theme is still very much intact (will be broken very soon though).  An Israeli Gastropub? Hebrewpub?  Very interesting menu filled with all sorts of inviting goodies.  Couldnt quite pass on the not so traditional, but still quite tasty Shakshuka (the Israeli version of Huevos Rancheros).  And to make the little one happy, her favorite dish in the world, Mac and Cheese – A slam dunk as far as crafty mac and cheese in the city goes.  Schapiro’s is an homage to another neighborhood icon, Schapiro’s wine company which ruled the neighborhood for 100 years (1899-2000) right next door.  A very nifty, inviting space 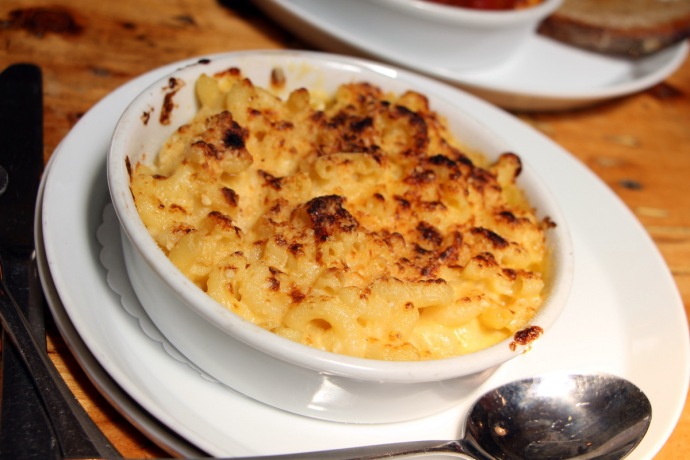 That was a failed eating break by the way.  I just wanted to go somewhere for a drink while catching some of the Russia-Belgium world cup snooze-fest.  We then walked down to the east river for some nice waterfront views under Williamsburg Bridge and New York’s most hidden attraction…. the East River Sea Lion Park, a bunch of Sea Lions sculptures I discovered while Citibiking with a friend a few weeks ago.  Kids, summer, water, sea lions, what else can you ask for.  Tacos!  But that’s later (well that was the plan at least) 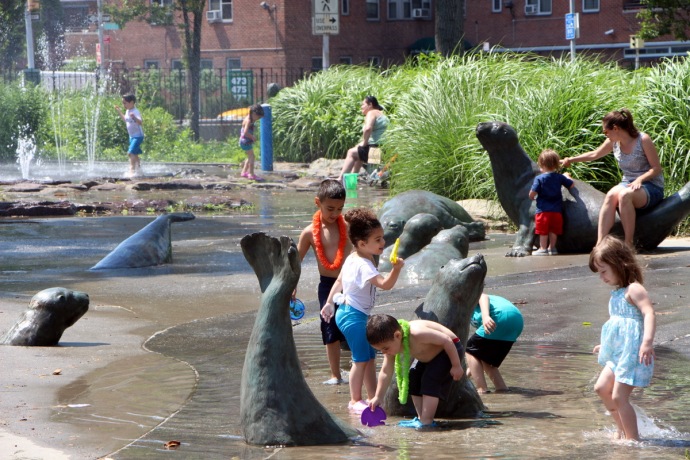 Eastwood – Its been over 45 minutes since the last Hebrewpub visit and my left hand started to shake.  What happens when you put a falafel and an egg in one room to the tunes of Michael Bolton with Brokeback Mountain showing the background?  Israeli Scotch Egg (top picture).  A hard boiled egg wrapped in a falafel, served with a side of Tehina.. a crafty and tasty little snack which I had before but wanted to show Mrs Z.  And surprisingly solid Fish and Chips (the things I do for the Brits here, and for what?) can be found in this fun, as local as it gets Hebrewpub.  I first learned of Eastwood at last year’s Grub Street Festival where I met its energetic and fun owner. 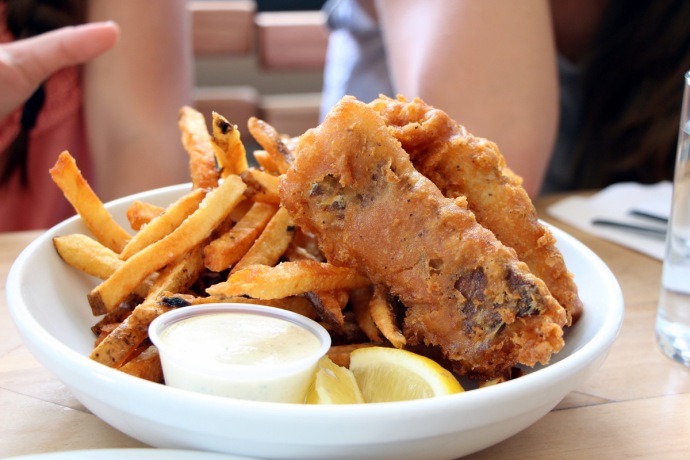 Way before the term “Hebrewpub” was even invented (10 minutes ago), there was the Eldridge Street Synagogue, on you guessed it, Eldridge Street.  Arguably, the most important establishment in the LES with the richest history.  While its really inside Chinatown these days, the synagogue is as much part of LES as anything else.  Opened in 1887, it was the first Synagogue built by Eastern European Jews in the USA.  Late 19th, early 20th centuary saw roughly 1.5 million Jews moving to the Lower East Side, while less than that moved elsewhere in the country.  The hour long tour (included in your admission) on the hour can help you imagine the daily activities and what this place meant to the community.  Although we actually did not take the tour (kids started to get tired, and I started to get hungry) we briefly spoke to the young girl running the tours, and also saw her in action while inside.  This is a striking looking structure by the way that will surprise even the European church lovers inside with its craftsmanship

Prosperity Dumplings, Vanessa Dumplings – Jewish theme continues.  It is after all what we eat on Christmas.  These dumpling places are on every Cheap Food list, and for good reason.  Four delicious dumplings for a buck just doesn’t get any more value than this.  Verdict: Prosperity (left).  Bigger, fuller, more flavorful Pork and Chive dumplings than Vanessa’s.  Also, there’s something about irregular shape food that I find more attractive.  Like pizza for example. 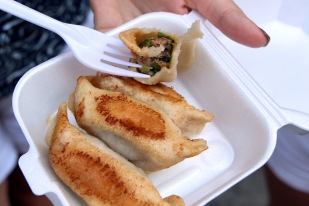 Melt Bakery – This first rate ice cream sandwich shop was more of a secret 5 minutes ago, before they opened their 4th location.  Delicious ice cream, and even better cookie dough (choc chip walnut, hello!).  I also love that they have mini sizes so you could try more, or just have a smaller one.  I’m finding many of the artisanal ice cream sandwiches out there too big and too expensive these days.  This is New York’s first Ice Cream Sandwich Shop, and they now also have a stand on the Highline

Di Palo’s – While not technically in LES, close enough and worth mentioning to those that are not aware of this neighborhood institution.  This is as old school as it gets.  For over 100 years selling imported cured meats, cheeses, and other Italian specialties (pastas, truffle sauces, fresh red sauce, etc).  But what is so special about this store to me is that even when quite busy with people waiting with numbers in their hands, you still get what I call a “Salumi Concierge” that will guide you and let you try anything you want with zero hassle.  You can be with your concierge for 30 minutes and no one will mind, because the people waiting want the exact same experience.  Try the Prosciutto, Finocchiona (salami with fennel), Cotto (Cooked ham) including truffled, and top notch Mortadella.  And don’t leave without trying some of their Truffled Pecorino – yes, more than one kind.  A rarity in this town.

Georgia’s Eastside BBQ – While killing time waiting for Mission Cantina to open, I stumbled upon this tiny BBQ joint.  I did hear about this place before, but had no intentions of eating here on this particular day, as my mission was clearly on Mission and their highly regarded riceless Burritos which we didnt get to a few days prior.  Mission failed again.  Half a rack of baby back ribs ($11) was simplify glorious.  Meaty, good quality, fall off the bone, perfectly seasoned dry rub with a side of homemade BBQ.   Plan was to leave room for the burrito, but I couldn’t help it and attacked this thing with full force.  Just solid!  The menu features all sorts of southern goodies like catfish and fried chicken.  Cant wait to bring the family here next.

Luca & Bosco – The most famous dogs in the neighborhood will soon become the most famous dogs in the city, Luca and Bosco.  Their proud owners opened this Ice Cream stand inside Essex Market about 7 months ago, and folks, it just doesnt get much better than this.  Drunk and Salty Caramel with candied pecans was heavenly.  Light, fresh and very gelato like.  They are currently making the ice cream at an incubator in East Harlem, but soon moving to a new place with a bigger kitchen.  One of the partners studied in Florence, the gelato capital of the world, where she mastered a few techniques.  Anyone who ever visits Florence knows how standards get elevated.  Highly recommend this one.

End of my eating adventures in the LES.  Other notable spots in the area:  Cata,  The new Ivan Ramen, Mission Cantina ;), Gaia, il laboratorio del gelato, and Katz’s of course 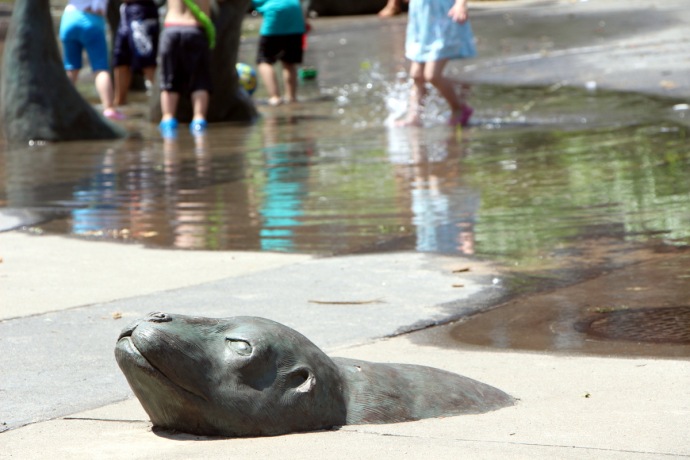 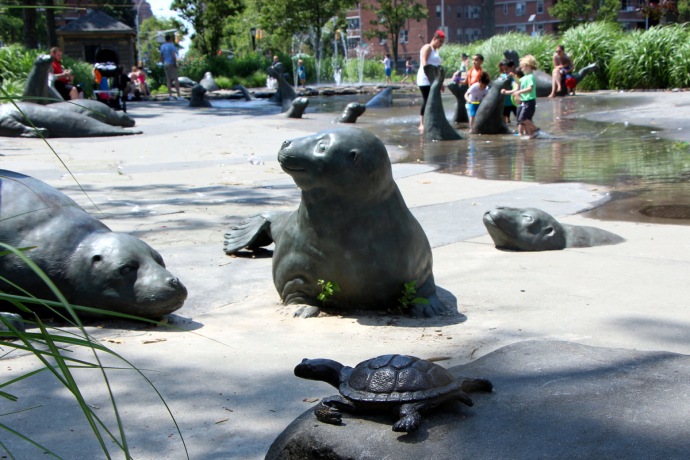