Roscioli {Rome} – I Dream of Deli

“United We Stand”, our go to deli by my office in Manhattan which changed its name from “United” after 9/11 cant quite pull this stunt.  Nor any of the other delis in NYC numbered in the thousands.  It requires special talent, special expertise and a special name which Roscioli got.  Not exactly a hidden gem unless your Rome research includes studying Trip Advsior rankings.  Roscioli, a deli/Salumeria by day, one of Rome’s top restaurants by night is #742 on Trip Advisor at the moment

Mrs Ziggy thought my trip researching just reached another level when I told her that we can use the bathrooms next door to the Roscioli bakery during lunch since we are having dinner there that night.  So I can go in and simply confirm our reservations while everybody uses the bathroom.  Brilliant plan!  What I didn’t tell her was that it was just a coincidence, or a bizarre 6th  sense that we don’t know about.  The next day my emergency plan was to just enter any random dining establishment and try to confirm our non-existent reservations while the girls use the bathrooms.  Of course with the amount of time they normally need, I would be found sitting with a bib around my neck munching on another Cacio e Pepe by the time they came out.

But I digress, again.  Roscioli represents everything about why I love going to Italy.  Raw material!  Roberto from Da Roberto in Mantisi had perhaps the most memorable line of the trip; “I’m not a chef, I’m not a cook.  I just present to you the ingredients.”  And Roscioli is all about the ingredients.

The first 2 dishes cannot be made at “United We Stand” Deli.  A plate of paper thin Mortadella from bologna with 3 year old Parmesan was like eating Mortadella for the very first time.  Silky, smooth, salty perfection.  Creamy Burrata with semi-dried tomatoes was a dish of the trip nominee, and a reminder that not all black pepper is created equal.  I don’t recall sun dried tomatoes as addictive.

What followed was a service misunderstanding.  Since we ordered 2 primis and 2 secondis for the 4 of us, the staff assumed that its all one course.  Understandable, I suppose.  Surprisingly the pastas were the weakest course, although its more of a testament to the quality of the rest of the dishes.  A Carbonara was supposedly one of the best in town, but we actually found it a bit too al dente for us, on the 11th day of a pasta filled trip.  I’ve had Carbonara and various variations of Carbonara in the US but never quite as al dente as this.  Gnocchi Amatriciana was more like it.

Highly doubt our deli even heard about an Austrian Simmental Entrecôte (rib eye if you scoring at home, or even if you are alone) which was perhaps the steak of the trip.  Perfectly bloody medium-rare with more flavor than all the Bisteccas we had in Florence and Lucca.  Of course all of this meant I get 4 bites, while my 11 year old gets half of it.  Meatballs with smoky ricotta was another big winner.  Somehow I came out of Italy with an unintended meatball fix instead of the intended Carbonara fix.  Meatballs you can get at many delis here in NYC, most likely covered with enough red sauce to compensate for the staleness and fishiness it gets from its neighbor inside the counter.  Nice tiramisu and chocolate fondue with fruits to cap a great but most expensive dinner of the trip (160 euros).

Sitting inside felt like sitting in a trendy Soho spot.  If you are looking for that Trattoria with locals feel you are not going to get it here.  Chances are you’ll be sitting next to other tourists.  Either way, you will most likely have an unforgettable meal.  Ask if possible to sit in the back or downstairs, as opposed to the front by the counter.  I leave you with pictures from both the restaurant and the Rascioli bakery nearby where we sampled some nice pizzas, and a delicious apple strudel. 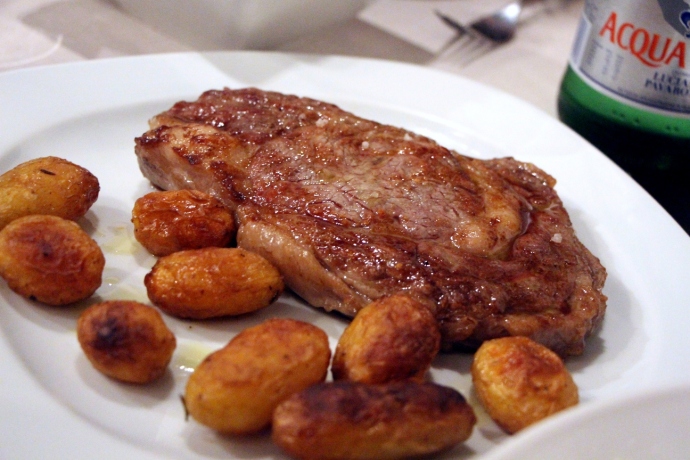 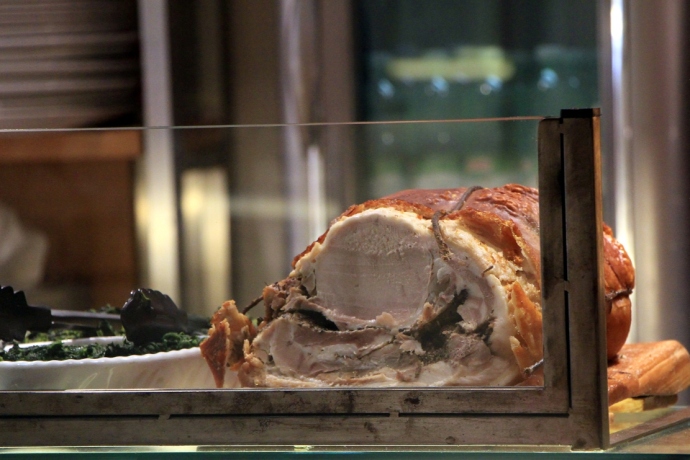