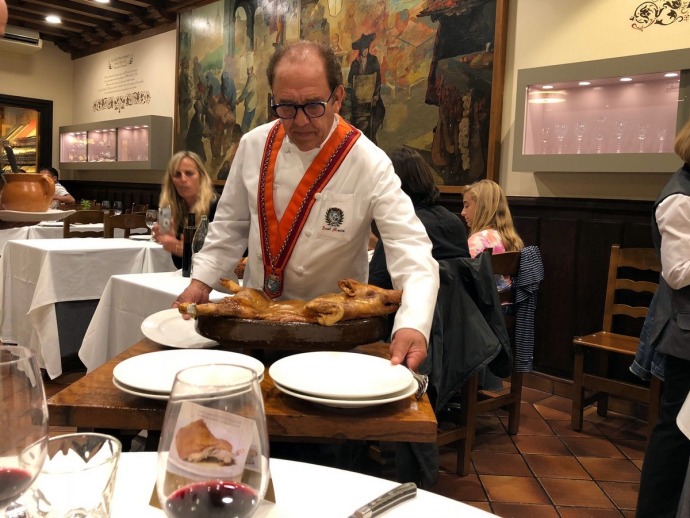 Segovia, the perfect tourist town.  How often do you come across places with such sheer beauty and plenty of unique attractions to boot.  Its rich history plays an important global role, and its essentially one giant lesson in Spanish history.  Which is why its best viewed with a guide.  Its monuments are not only important and UNESCOd for good reason, but they are a feast to the eyes.  The aqueduct alone is worthy of the train ticket from Madrid, even if you’ve seen such aqueducts before.  And then you have the Cochinillo (Suckling Pig).

No one knows how it all started, but everyone knows who popularized it.  In the 1930’s Don Candido started carving Cochinillo with a plate while everyone else watched with Love Eye Emojis followed by Cash Eye Emojis.  Today Meson de Candido is still going strong, while many others all over Segovia are now doing the same thing.  And gastrofreaks from all over flock here not for the Aqueduct or the castles, but for the baby pig.  The whole scene is a little disturbing in a way.  Baby pigs featured on window displays, sometimes provocatively, akin to the red light district in Amsterdam.  I figured if my kids ever become vegan, this would be the reason.

But if Don Candido put the Cochinillo on the map, Jose Maria put it on the Google Map.  Today, Jose Maria is the Taj Mahal of the pig pilgrimage and you can feel it when you are 50 feet away from the 5 room restaurant.  It doesn take much Google searching to see videos of Mr Maria plate carving that thing while proudly wearing his medal.  In 2002 Maria, who owns his own breeding farm, founded PROCOSE, an association devoted to the promotion of the Suckling Pig of Segovia.  He converted the pig into a cultural icon.

The mural behind us serves as a reminder for all the plates Jose Maria used to break in the past.  But it wasn’t clear whether it was accidental or did he throw them Greek style when he was done.  But today the carving is so theatrical that everything including time pauses for that 10 seconds.  He cuts and plates it with the plate.  The flesh maintains much of the juiciness.  The skin is crispier than crisp but still chewy.  And its all rather simple.  You expect something more complicated from such fame, but its really just a suckling pig simply seasoned with salt and pepper.  The reason it works so well, is the quality of the main ingredient.  These guys got this thing down to a science.  From the weight of the pig, to the timing of the kill and what it had for breakfast days 4 to 6.

But there were other surprises contributing to this most memorable meal, starting with the Iberico meat and cheese platter.  While we liked the Jamon and Chorizo alright, it was the dryer more textured Lomo (cured tenderloin) that won.  And then came the Judiones, some of the most massive, creamiest white beans you will ever eat.  Part of a stew of course, a relative of the Asturian Fabada we couldnt get enough.

And I dont normally get excited or even remember house wines, but this house red had the Aroma and complexity of a pungent full bodied aged red.  Even Mrs Z couldnt help herself and had a glass too many.  After the meal while we were walking, she suddenly paused, and turned to me frantically “Did you find the Chorizo?!?”  Translation (after 25 years of marriage):  We didnt have dessert.  Did you find a nice Churros place? 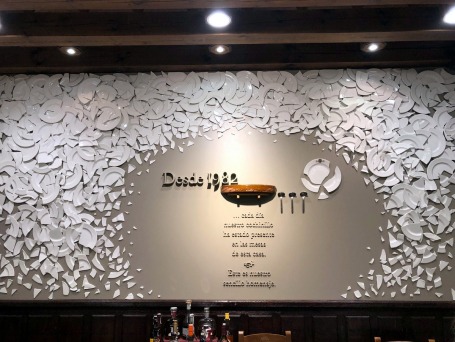 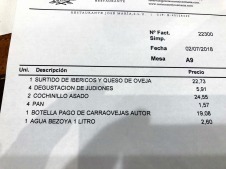