Toro – The Once Remembered One

Next month I’m turning 50, and this one feels different.  It almost feels like I need to make some lifestyle changes, or at least make a list of things I need to accomplish.  Do I need to take a pottery class or something?  Is there a manual for this?  Age is just a number, until its not.  At 50, you start remembering hockey player’s dads.  At 50, if you go to Toro on Valentine’s Day, everyone around you including the staff will be half your age.  At 50, you are the only one at Toro who doesnt get a bread basket.  Smart!  No bread for you!

When Toro first opened it was the hottest table in the city.  Sometimes places in NYC simply expire in ones mind, and you forget that they exist.  But I needed to be relatively close to Budakkan on this day (debutante’s 18th bash) so Toro was the obvious choice.  After Nishi, Salinas, and others were solidly booked that is, and Cull and Pistol turns out is not romantic anymore.  Who knew?

Toro for the most part delivered.  The space is more smart repurposing of the old Nabisco complex.  In fact I’m pretty sure I was sitting in the exact same spot where the Oreo cookie was first conceived.  Sort of like the Chelsea version of the “I’ll have what she’s having” table.  Toro went from a hot table to the perfect first date spot.  It got that cool factor, and just enough going for it food wise to impress seasoned foodies.

Tapas, you order them and there’s no rhyme or reason to the order they come.  At least  not here.  When the waitress brought the Gambas Al Ajillo, she came back 5 seconds later to ask if we ordered them.  I said “yep, but I wasnt expecting it to arrive so soon (5 minutes after we ordered)”.  That followed by a look of “the answer is yes, Boomer”.  This was closer to a buttery NOLA style BBQ shrimp rather than shrimp swimming in garlic and olive oil.  Thats a good thing.

The Octopus was spanked just enough for a perfect texture, with some squid ink sauce and a Harrisa-like sauce to play with.  Another highlight, perhaps the biggest, was the Maiz Asado, like a Mexican corn on the cob without the cob.  Simple and brilliant.  More simple and almost always brilliant were the Pimientos de Padrón.  I wouldnt dare ask on VD why mrs Z Shishito’s dont come out like this.  The Patatas Bravas were standard but probably an unnecessary order in our case.  If there’s any fault to the random arrivals is that the Patatas should never come last.

Not everything worked though.  The Bocadillo de Erizos, a pressed sandwich of sea urchin, miso butter & mustard seed tasted like two married greasy diner toasts with a hint of sea urchin.  The Rabbit Empanada sounded good on paper, but required much of the accompanied salsa to make an impact.  Same with the fat churros that needed cups full of chocolate gold instead of a drizzle.  And the bread looked ravishing.

Toro is a solid two Z.  Good enough to recommend, not strong enough to return, and in my mind at least, will go back to the dining abyss in about two and a half months.  Too dark for quality pictures 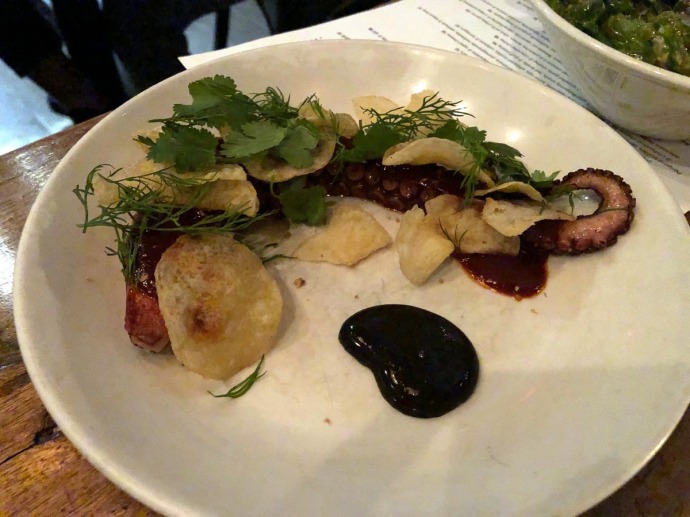