What to Eat in Getaria {Basque} 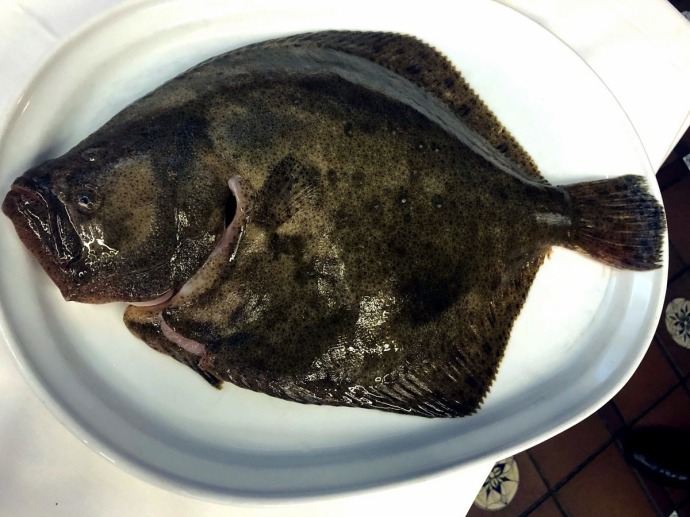 What should you eat in a small fishing village where the specialty is Turbot?  You guessed it… Steak!  Its actually quite delicious in this part of Spain.  Same goes for the green Shishito-like peppers they call here Gernika, which can be seen on just about every menu.  But the story is similar to the one in Segovia.  People Pilgrimage (yes its a verb too) from all over for the world renowned holiness, the Turbot.  Heard of the Camino de Elkano?  Me neither.

But the town of Getaria happens to be a major stop in the UNESCO’d Camino de Santiago where 250,000 pass by annually.  I took a walk with Mrs Ziggy one morning where we briefly walked on the Camino path, and made an ill advised left turn, only to see some of the walkers following us making the same turn.  Oh no buddy, you need to go THAT way.  We are just chilling, picking on grapes.  Curious how many hikers give in to temptation, and stick around for a few days to eat and drink in this culinary wonderland.  Getaria is particularly unique.  I cant compare it to any other town we visited in Europe.  Here’s a little food guide to help you out.

Mayflower – This became the family fave after spending a week here.  The tables outside lining up under the umbrellas are some of the most sought after in town.  Reserve them in advance (for 8:30 or 10 seating).  Fresher than fresh fish cooked on a charcoal grill dominate here as in just about every other restaurant in town.  We indulged in Monkfish (Rape), Sea Bass, Hake (Merluzza), and even the Bonito which is like the best canned tuna you will ever eat.  Start with the green Gernika peppers, tomato salad and their terrific Pulpo Gallega (smokier and spicier than the usual Galician Octopus).  Wash it down with a local Txakoli of course. 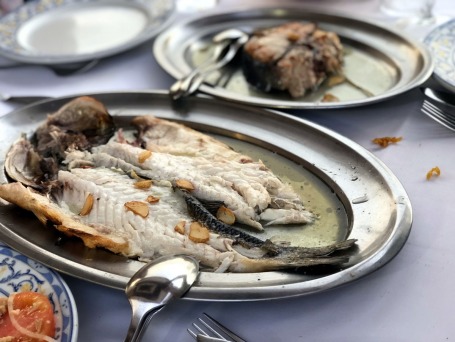 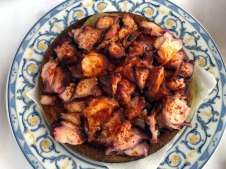 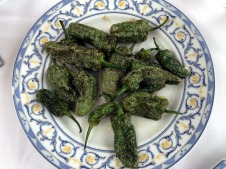 Elkano – This is the reason why people take expensive taxi rides to Getaria.  Its considered one of the best restaurants in north Spain, and a whole fish (Turbot of course) eating experience like no other.  I asked the friendly owner what happens when they don’t have Turbot or run out of it.  He explained that they try to convey and market themselves as more of a complete seafood establishment that is not just about the Turbot.  A few minutes later you are presented with the Turbot, treated like the holy grail.  Later on, chocolates come on a plate shaped like Turbot, followed by the bill with a Turbot shaped magnet!  Ok?!?  The owner will explain the various parts of the fish, and the different textures and flavors resulting from them.  This is also a good place to try Kokotxas (fish cheeks). 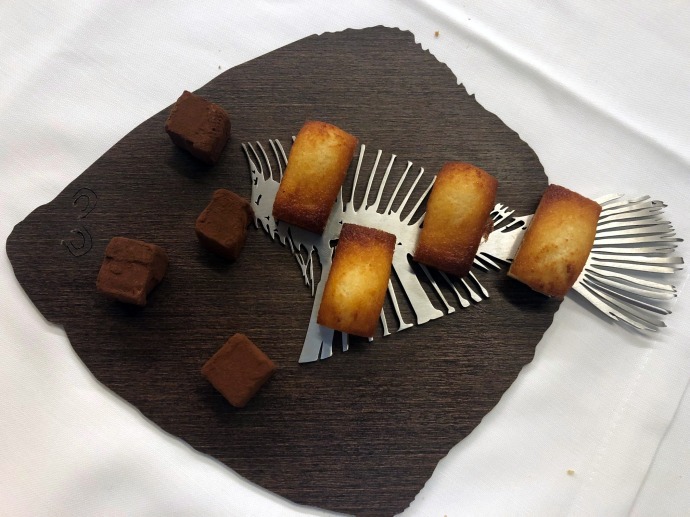 Kaia Kaipe – If the Elkano experience is a bit too rich for your blood, its baby sister may do just fine.  Like a nice cross between an Asador and fine(r) dining.  Popular with locals partly due to its inviting terrace.  A similar menu to Elkano where you can indulge in the Turbot among other local species.  And if you are finally ready for some meat in Turbotville, the Sirloin here is top notch. 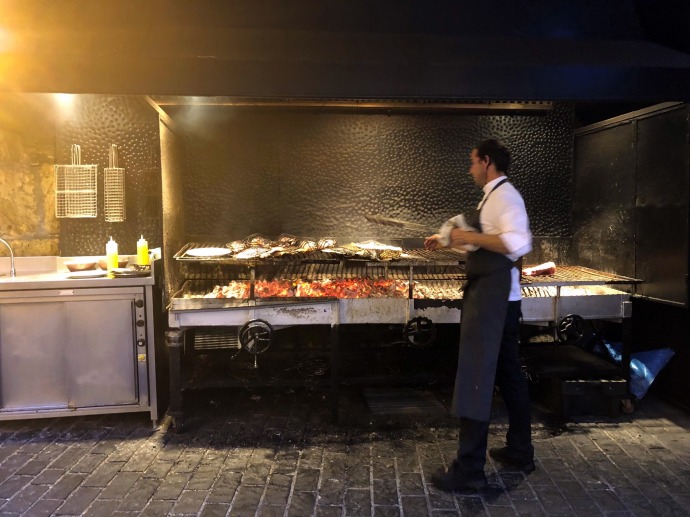 Giroa Taberna/Politena – Perhaps the two most frequented bars serving Pintxos and an assortment of simple large plates.  Politena seems the busier and more “Pintxos friendly” of the two

Araneta – A very lovely, simple looking Asador up on the mountains, very popular with locals.  About 20 minute drive from Getaria.  Here you can get a fantastic Ribeye, and an even better wild mushrooms with Foie and egg yolk.  When you have a group of mushroom haters (the rest of my family) wipe a mushroom plate clean you know you got something very special. On the drive back stop by at… 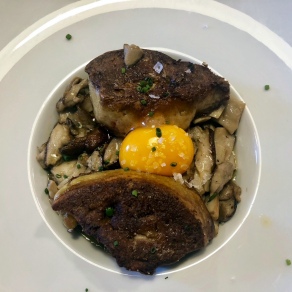 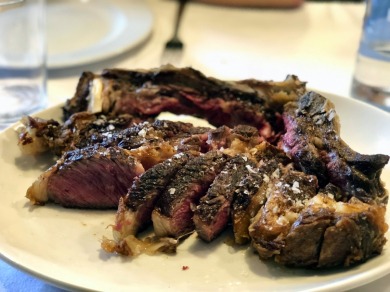 Txakoli Ameztoi – One of many Txakoli producers in the area.  Stop by at the very least for the amazing views off its parking lot (bottom)

El Astillero – The one that got away.  Tried to eat here on multiple occasions but it was either booked one night, closed on another, and “no terrace? Neh. Lets try again tomorrow” night.  Well, tomorrow never arrived.  Its a similar Asador to Mayflower, but the lack of a terrace did make a difference in this case.  I’m not one to usually choose restaurants based on their outdoor space but there was a clear difference between eating in and out here.  The terraces of Getaria should have their own Twitter account. 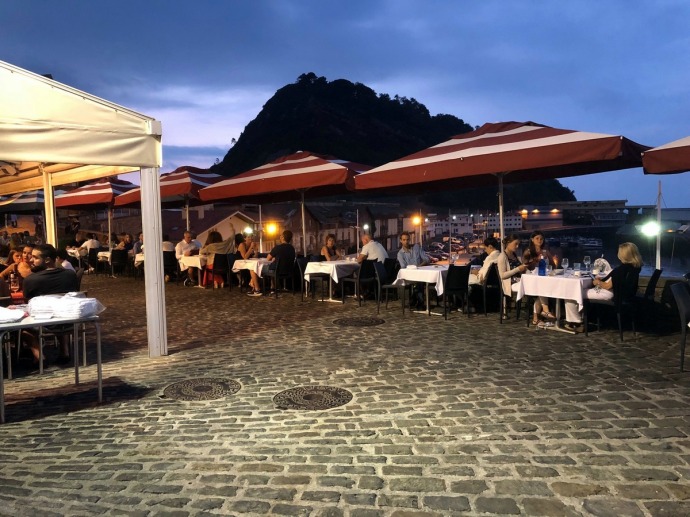 Gaintza – Another Txakoli producer and a 6 room hotel which served as our base for the week.  Sometimes accommodations dont quite work out as you fantasize, and sometimes you fantasize about your accommodations for days to come.  This was the latter.  We also took a tour and tasting of the winery.  Very interesting, informative and quite delicious (more Bonito please, and anchovies).  Loved waking up here every morning. 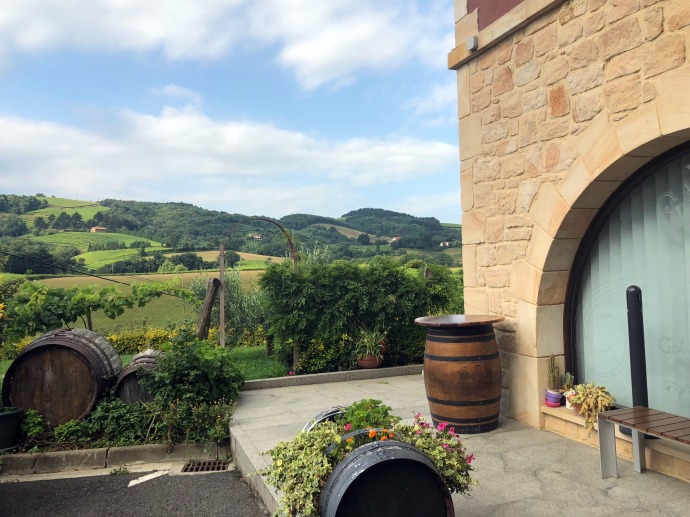 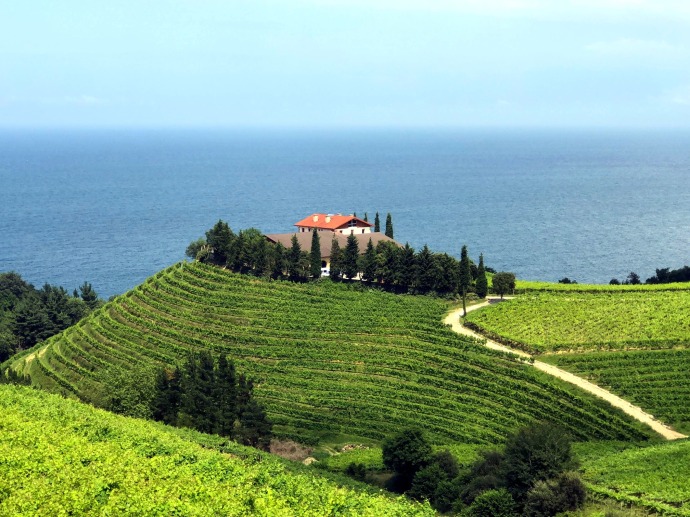 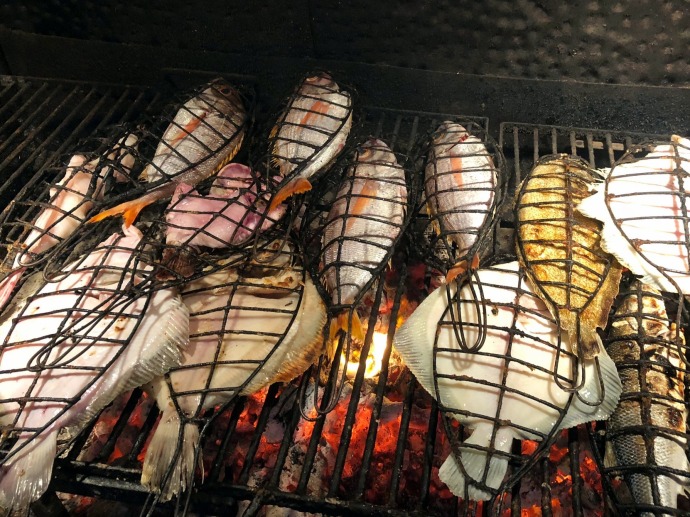 One thought on “What to Eat in Getaria {Basque}”