Miss Ada – Its All in the Name 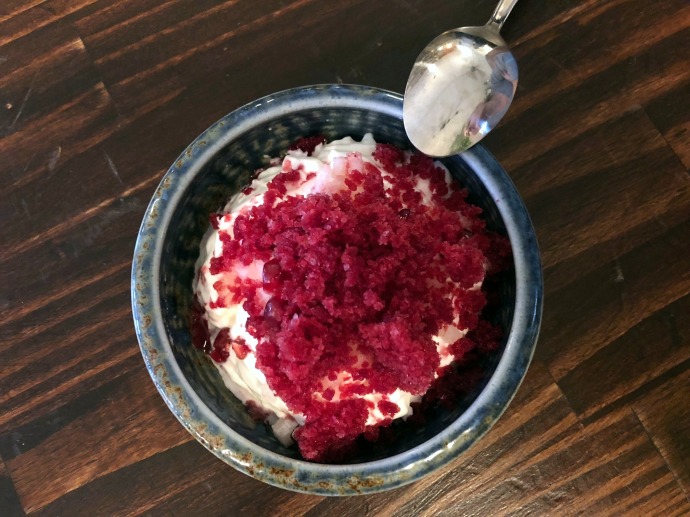 Food is the new high tech.  Israel, the size of New Jersey continues the sabra assault, sending our way talent and cauliflower in a furious rate.  From Nur, to Timna, to the Einat Admony empire, to Miss Ada a newish Israeli in Fort Greene, Brooklyn.  Buzzy Israeli joints are opening in a furious rate all over Manhattan and Brooklyn these days.  Good news?  Not entirely.  While I’m loving all these options, I would sub about half of them for a high quality sprawling casual place serving the simple stuff (Shawarma, falafel, Kibeh).  A place like Itzik Hagadol in LA, where I can take my extended family on a whim.  “Pita Off the Corner” in Brooklyn is close to that, but its way too fast-casual and low grade.  With so many high caliber, mid range $75 per person places popping up in Brooklyn the last few years, you just have to wonder.  Is Brooklyn the new Manhattan?

But the plan here was not to start with another anti gentrification rant, but talk about the awesomeness of Miss Ada.  Sometimes I start writing and just go where the wind blows.  But then I close the windows and get back on track.  Now its a gentle draft from the living room setting the stage for a much gentler post.  Miss Ada has been on my radar for about a year now.  Thats what happens when you open in Fort Greene.  I live in NYC, and visit Italy more often than that part of Brooklyn, even though I’m in Brooklyn 3 times a week.

Miss Ada’s perfume of choice is Amba.  As soon as you enter, you smell this mango condiment engineered primarily for Shawarmas, but here used liberally in many dishes.  A curly Miss Ada looking like a typical Sabra pictured everywhere from the business cards to the menu.  So who exactly is this Miss Ada you may ask?  She’s a decoy!  Its a play on words.  Combine the words together and you have Missada which means restaurant in Hebrew.  This is Tomer Belchman first Missada after stints with Bar Bolonat, Gramercy Tavern and pork legend Maialino.  Ironic somewhat considering three hours prior to the meal, I was eating the best white beans in town at Nick Anderer’s (Maialino, Marta, king of Roman pastas, pizza, and beans) newest Martina, followed by an unexpected dessert: Beans with a spicy pork shoulder ragu, leftover from a sexy bean photo shoot at Martina

The menu is sectioned in a way that makes you order more than you can handle.  Like straight out of restaurant business school.  The whipped Ricotta is silky smooth addictive sweetness.  A little bit of honey and brown butter goes a long way.  Hummus Masabacha is essentially hummus with deconstructed hummus and other goodies.  We took a chance with the chicken liver and caramelized onions which worked and wasnt as oniony as it looked for onion sensitive Mrs Z.  The Short Rib (We ordered the Kofta, but got the rib.  Write it down people ;)) was nicely charred from the outside, tender and flavorful on the inside.  Like a true Sabra!  Came with Amba on the side.

Jerusalem Artichokes (Sunchoke) are in season, and the soup always gets our attention.  This one is as good as it gets.  Spicy, complex, with pine nuts and crunchy apple bits.  And by law, Israeli places must feature Za’atar spices on the menu or on pitas I believe the law states.  Here you have both, including a well cooked salmon coated with that gentle Za’ataness.  Add Labne, charred shallots and Japanese eggplant and you got a St  Patty’s parade in your belly.  Labne Mousse for dessert is another winner.  While others use Granita to shock and overwhelm, here the Pomegranate Sumac Granita is carefully put on top of the delicate Labne with poached pear bits mixed in.  Nice use of fruits and veggies throughout the menu.