Ikinari Steak is a Standout

You may as well forget everything you know about Ikinari, the latest Japanense import to hit the streets of NYC.  The gimmick of standing while eating quickly caved in to stressed out New Yorkers.  While thousands of runners are running the NY marathon as we speak, the rest of us creatures of habit having major difficulties coming to terms with the idea of eating while standing.  Eating while walking is acceptable.  Standing, not so much.

In a way I was disappointed to be offered a seat when me and my friend showed up as I was all ready to have this new experience.  I even trained for this.  I ate a fruit salad while watching TV, clocking at 3 minutes and 40 seconds standing time before collapsing.  The next day I almost made it to 5 minutes of couscous, which requires higher concentration, balance and hand mouth coordination.  But the big steak test never arrived.

Ikinari is a new concept in NYC, and its surprising that it hasnt been done before.  A fast-casual steakhouse.  Steak is arguably the most sought after food item for locals and tourists alike, but is not very affordable.  A good steak in an average steakhouse will run you over $50.  Similarly we made lobster affordable over time with fast food lobster rolls available all over, so why did it take this long for steak.  I cant really answer except to say its here, and by the sound of it it, here to stay.  The natural progression is usually for a place like this to open in East Village, and then if successful spread to areas like Hell’s Kitchen before spilling elsewhere.  But in this case the plan already in the works to open 7 NYC locations by the end of the year.

So how does it work?  Good question Timmy.  You get your steak options (Sirloin, Filet, Ribeye) and the amount you want, just like buying steak in the supermarket pretty much.  We shared a 15oz Ribeye that was grilled to a beautiful rare hot pink.  Unless you require it any other way, it is best to follow their recommendation and order it rare.  The steak is simply seasoned with pepper and continues to cook on the sizzling plate.  By the time we were done with it, it was getting closer to medium.  While it wasnt exactly top steakhouse quality ribeye, it was a nicely cooked satisfying ribeye aided by the dollop of garlic butter on top.

Another must dish here is the garlic pepper rice.  It comes sizzling with corn, and pieces of almost raw meat that are cooked enough by the time you (or the waiter) mixes it all.  Corn is the vegetable of choice here that also comes with your steak (with some onions).  The entire experience almost feels like eating steak in my backyard.  They give you a selection of sauces including a warm, salty soy based that they advise pouring on the meat.  But after trying some of it, we were glad we didnt, and instead opted for the sweeter sauce in the smaller container.  Final bill: no drinks, $23 per person for a steak dinner!  Except that this was lunch 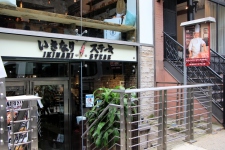 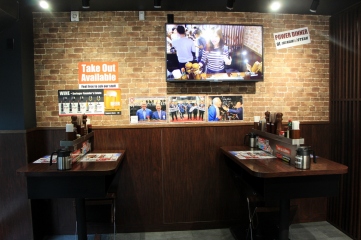