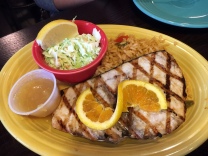 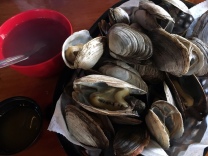 I didnt think it would take 7 years and 348 days.  That’s 2,903 chalk marks of lower L (for lobster) in my man cave that I can finally erase.  That’s 2,886 days without a proper lobster roll, 2,872 without clawed lobster, and 2,745 without any lobster at all.  I have a Sheldon Cooper style spreadsheet that helped me cope.  The occasional Caribbean spine lobster did help, dont get me wrong.  But that’s only after choosing BYOC establishments that would allow us to bring our own claws.  My father always used to say, “a lobster without claws is just a tail”.

The game plan was not to go Meshugenah, and have lobster for only lunch and dinner.  We stayed in a little resort town called Ogunquit.  It means “A beautiful place by the sea” in the Abenaki native American dialect who settled there in the late 1600’s.  However judging by the type of crowds that visit this place, one may think it means “she whose bosoms defy gravity”.  Essentially we came, we ate, and then we came and ate somewhere else.  Pretty much sums up the trip in a nutshell.

West Boylston Seafood (MA) –  This was a worthy stop on the way over from NYC. and a nice welcome into seafood country.  A perky hostess and waitress takes your order in the front, and brings your food to your table.  By the end of the hour, perky hostess will know everything about you including your favorite color, and where you stand on stem cell research.  Simply grilled swordfish seemed fresh, and cooked without crossing to the dry side as Swordfish often do.  Haddock stuffed with bacon (who knew!) was excellent as well

Perkins Cove Lobster Shack (Ogunquit) – Those Steamers!  Plump and very flavorful.  But I never had to clean my own clams before.  They give you hot water and you need to work it.  You taste the sea and then some.  Our first Lobster of the trip did the trick  But it was the wonderfully spiced and sauteed haddock tacos that perhaps stole the show.  A classic shack in the middle of picturesque Perkins Cove.  A smaller than expected line outside to place your order, managed by one of many Eastern European students flocking Ogunquit in the summer.  So you may want to brush up on your former Yugoslavia geography

Jake’s (Ogunquit) – Another fine lobster stop though in this case not planned.  The plan was to eat at Beach Plum lobster but… Houston we have a problem.  This is the point a father realizes that one of his children is not exactly fond of the lobster.  Beach Plum turns out serves nothing but cheap lobsters (and steamers), with picnic tables outside.  It is just about as shacky as it gets.  Jake’s, recommended by Mr Plum to the rescue.  In addition to the lobsters and fish and chips, we particularly liked the crab roll.  And for this NYer $26 for a double lobster seemed like a reverse robbery. 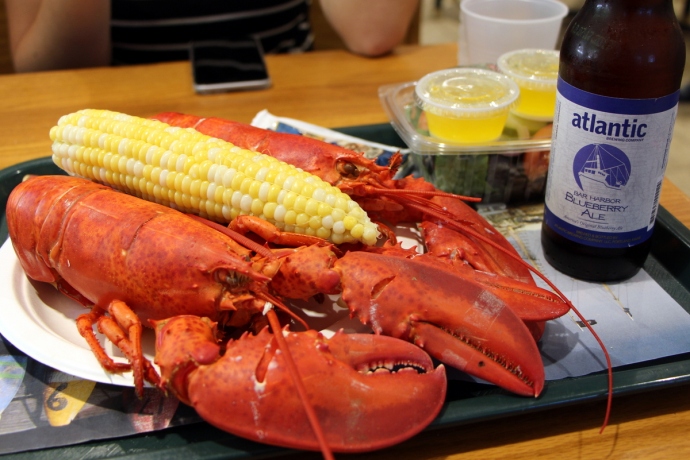 Surf Portsmouth (NH) – The big miss of the trip.  The seafood heavy menu looked extremely promising and prompted me to come for dinner instead of lunch on the way back.  People wait for hours to eat here.  But for the most part if felt amateurish and pretentious.  Low grade, flavorless tuna as tuna crudo.  After eating that I should have cancelled the almost eatable sesame crusted tuna with wasabi mash.  Uninspiring Portuguese Seafood stew, and Shrimp Vindaloo that was missing its Vindaloo (more like regular Thai curry).  Other than that it was great! 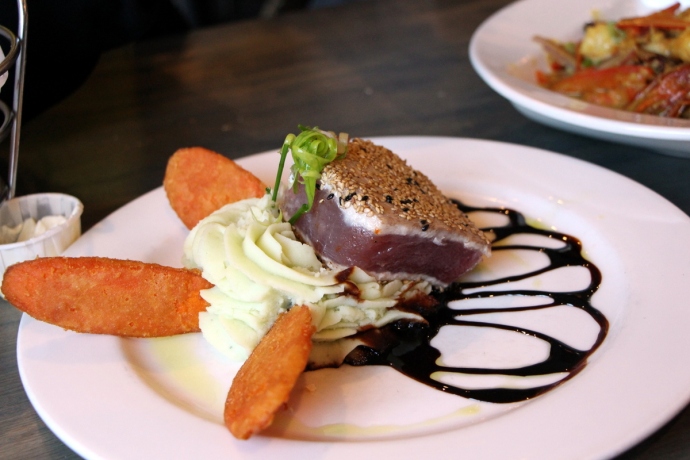 Eventide Oyster (Portland) – Come for the lobster roll, stay for the Lobster Stew!  A revelation of sorts, and the only thing on the trip we had to order seconds.  Like the most delicious creamless lobster bisque you will ever eat.  Ample amount of Lobster and Maitake swimming in this ridiculously delicious broth.  And while I loved the famous brown butter lobster roll, I was missing that toasty crunch (see next).  Good burger too.  I deliberately chose Monday for the full day in Portland and still had to wait 40 minutes for a table (lunch)

Bite Into Maine (Portland) – A food truck dishing out killa lobster rolls in For Williams overlooking the stunning, and I mean stunning Portland Headlight area.  If there’s a better lobster roll/setting combination on this planet, I would like to know please.  Sinful, sinful stuff!

Street and Co. (Portland) – Over those 8 incredibly difficult lobster challenged years, I had a lot of thoughts, sometimes inappropriate, about this place.  Yes, Portland has an amazing dining scene with trendier places like The Honey Paw and Duckfat.  But its the menu of Street that continues to speak the most to this Seafood challenged New Yorker.  A whole fish, Branzino in this case was simply sensational.   Lobster with Linguini and garlic/butter sauce as good as I remember.  And a tomato based Fishermans stew with Romesco was a lot more Portuguese than the Portuguese stew from the day before.  They love the nutty Romesco here judging by some of the dishes.  Great mussels as well.  The only miss was with some of the small “Tastes” like the haddock and the mushrooms plates which didnt quite work.  In the mushroom dish the pesto for example completely overpowered the Chanterelle 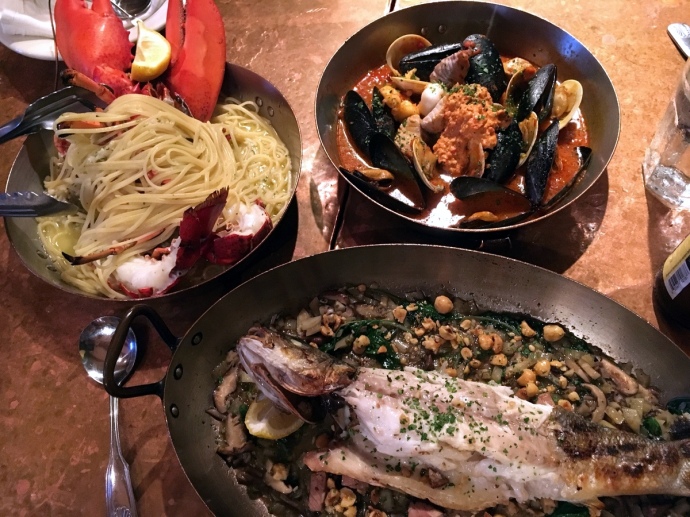 Roost Cafe (Ogunquit) – Enjoyed this one for breakfast overall.  A little stuffy inside.  $4 for real maple syrup sounds excessive, considering the pancakes cost $11 already.  I’ve seen them for $7 on other menus throughout Maine.  The blueberry pancakes, another Maine staple dish, were a little too thick for my liking.

And…  We also visited Maine Mead Works, one of the only Mead producers on the east coast.  Mead is an alcoholic beverage made with fermented honey.  We got a tour, got educated, and got drunk.  On the way over to Maine, we stopped by Exeter NH, and visited a fine Chocolate store called La Cascade Du Chocolat where we sampled and purchased chocolates that may last till the end of the year.  In the store I was flipping through a pastry book by Standard Baking Co whose delicious pastries we enjoyed two days later Portland. 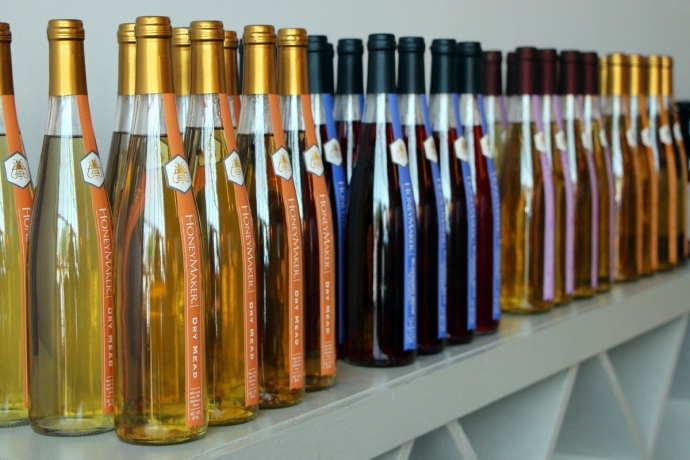