La Vara – I Rest My Case 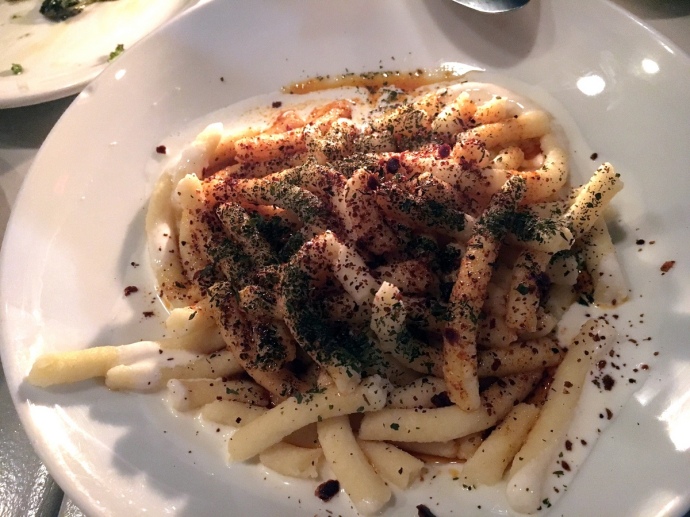 Prologue:  I waited until after the Yom Kippur Tsom is over so not to offend or temp anyone.  Although I doubt any of the pictures here would make anyone break off their fast.     Apologies for the lack of decent photos as of late.  I forgot my camera (and skills) at home for this one.

Am I becoming a food brat, or turning into Mr Grumpy?  Am I on the way to joining The Joy Suck Club?  I’m only in my late 30’s (46 to be exact).  But ever since I started grading them I cant get over the one star hump.  Sure, we’ve had good meals as of late at places like Olivier Bistro in Park Slope where the poor lighting (OMG I AM joining the club) and casual neighborhoody traits dont quite make it an exciting post.  This post should have really been about Atoboy, baby Jungsik, which I had to cancel 4 times in the past two weeks.  But trying La Vara was long overdue, and frankly I expected more.

If La Vara feels like a place whose owners are concentrating on opening their 4th restaurant, it is.  Alex Raij practically owns Chelsea with her two tapas joints, and Tia Pol where she started before a messy divorce.  But it was La Vara getting all the accolades including the all important, coveted Michelin Star.  When I told my wife the place has a Michelin Star after the meal, I received the same look when she discovered the pissing fountain in Prague wasnt pissing.  And while I wasnt particularly hungry after the meal which included plenty of dishes, let the record show that for the first time ever, Mrs Z required a snack when we got home.  The title of this post is a result of another example that Michelin one stars in NYC is a random mishmash of names that arent very Micheliny and consistent, making the entire achievement dubious when they lose the star after one or two years.

At the end of the meal, when I looked around I noticed something I dont normally see in Michelin restaurants.  We are the youngest people in the room including the staff, a redder flag than being the youngest in my book.  Is that why they wanted to sit the 4 of us (all mid 40’s) at the awkward table for 8 right in front even though we had reservations?  Were we not cool enough for the odd communal table in the middle of the room?  But we requested to move and they happily obliged.  I’m just puzzled sometimes when we show up to a place with reservations and dont have an acceptable table reserved (I’m looking at you too Narcissa).  The service throughout was efficient, but at the same time cold, and impersonal.  Maybe, just maybe, we were simply not cool enough for La Vara.

Because if we would, perhaps the waiter would explain to us that the roasted market vegetables today were just broccoli rabe that required all of the Romesco sauce to ease the bitterness.  Perhaps the bread would not have been stale and we would have gotten it way before midway.  Its the little things that can add up.  I suppose if anyone cared to look at their website as of late, one would notice the Gurrulos, the Gnocchi like Fluffy semolina pasta is still offered with ground goat meat which they stopped offering two years ago.  Maybe at the same time they would have noticed that Gurrulos have now been autocorrected to Guerrillas.  Website false advertisement is a little pet peeve of mine.  Its either that or lack of attention.

But it wasnt a total disaster by any stretch.  The Daurade special arrived simply cooked, covered with a nice mild red sauce and tasted like Daurade should.  The suckling pig had a nice amount of rendered fat and cracklings, though the accompanying sauce was rather meek.  Both at $31 could have come with some vegetables to make it a little more worthwhile, especially considering you are sharing everything.  Sidenote:  I swear to the food gods that the next time a waiter tells me small dishes are meant for sharing, I will remind him that Employees Must Wash Hands.

The rest of the meal featured wrinkly basic Shishitos, the culinary Russian Roulette when you eat with someone not normally susceptible to spicy food.  One of about 10 peppers is spicy, and sure enough my friend’s first bite was ooooohhh boy.  The best thing I ate was probably the Berenjena con miel, fried eggplant sticks with honey and cheese.  Although my honey wasnt too fond of the honey.   Lamb meatballs were dense and meaty, but average when it comes to meatballs in the city.  Migas Aragonesas, a fried concoction of bread, chorizo and egg was fine.  And an almond and fig hard tart sounded much better than it was. A mostly basic biscuit.

La Vara
268 Clinton St, Brooklyn
Rating: One Z (out of 4)
Stars range from Good to Exceptional. Simple as that 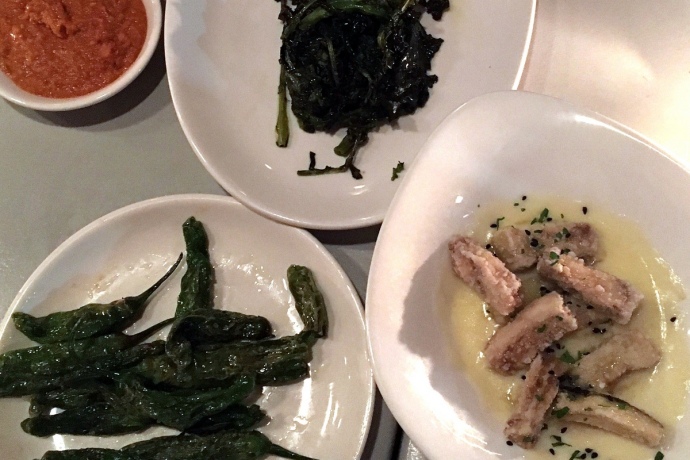 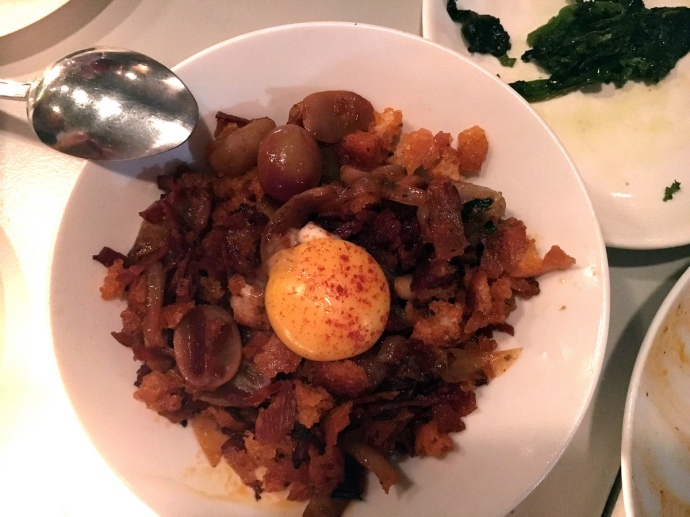 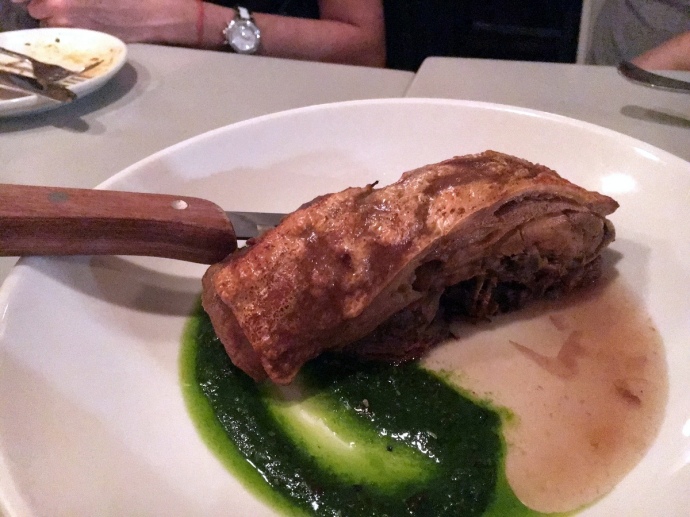 One thought on “La Vara – I Rest My Case”