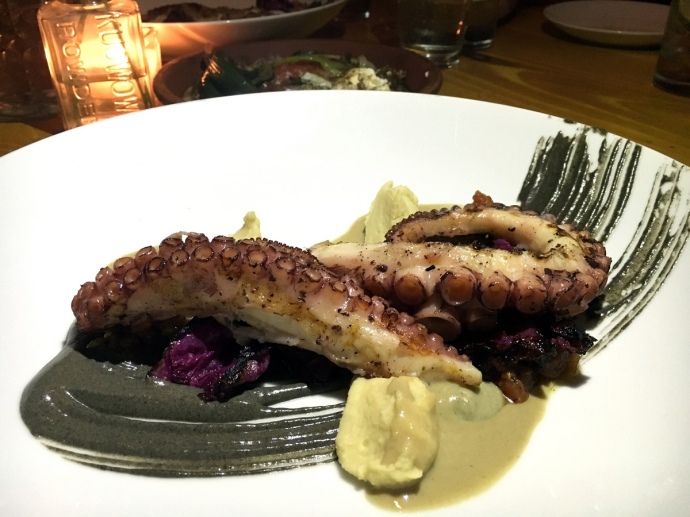 At Tompkins Square Park, just east of Timna, there’s a Temperance fountain, constructed in late 19th century to help locals with their alcohol self restrain.  Drink water, avoid booze.  Sounds easy enough.  A primarily German neighborhood did all it could to maintain the legacy, up until the prohibition.  Today the park is surrounded by bars!

No such temperance, self restrain luck with Timna’s new spring menu however.  Dish after dish of dazzling combinations between the newcomers and the old heavyweights like the Kubaneh and Octopus, testing my self control and wallet.  Like a fat kid in a candy story, I want to eat all you got, now!

Perhaps if fat kids would eat cauliflower like this, the world would be a healthier place.  At Israeli establishments we are attracted to Cauliflower like Trump to Twitter.  But it was the cured tuna Sashimi that stole the show yet again early on with all its visuals, textures and flavors.  There was melt in your fork short rib with even better mushroom, and cheesy gnocchi done Roman style (Semolina).

The mains sealed the rare triple Z rating.  Legendary octopus whisperer Nir Mesika dishes out killa Octopus which I already discussed in great length here and below.  But on this night a new dish stole the show.  Two hefty fillets of marvelously cooked Striped Bass with Israeli couscous (aka Pearl Couscous invented for the digestive challenged David Ben-Gurion, Israel’s first Prime Minister). I’ve been to places where one such fillet made the entire dish for the same price.  Mesika feeds his diners like his children.

Chutzpah Nation is clicking on all cylinders.  A full house of the young and the restless meant we belong alright, albeit texting was required sometimes to communicate.  My dish descriptions dont describe very well in this case.  There’s an art form to the way Mesika assembles each plate, with the goal to accommodate all senses.  We havent run into many chefs with this style.  From such a small kitchen come this ingredient heavy plating.  Not every bite is the same, and in some cases you even scavenge hunt.  Oooh, a raisin, I found a raisin!  Lets look for another one.  Mrs Z and I make our own fun! 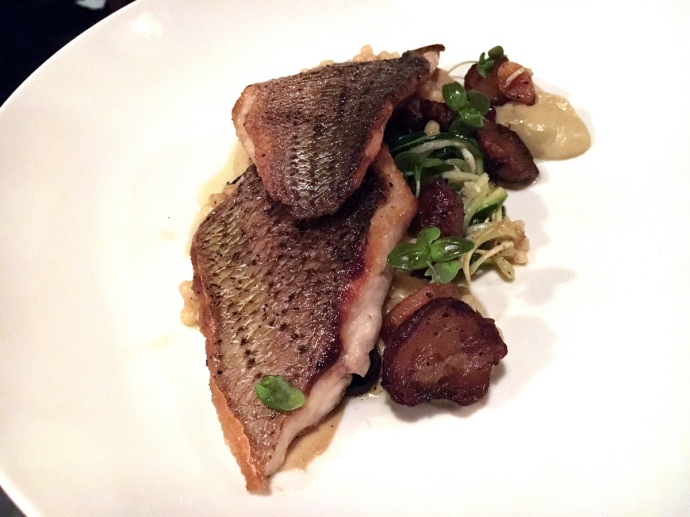 I will make this one nice and simple for you.  Pressing for time as of late, with only a week or so before I leave you yet again on another eating assignment (Sicily).  This one will be the biggest and baddest assignment ever, with a lot of interesting surprises in store.  Though I may be suffering from my first ever FRFS (food research fatigue syndrome).  I’m now seeing Busiate in my sleep and sometimes even when awake, like while watching the Euro 2016 (Football/Soccer).  As much as I’m enjoying the Euro’s, its best served as a rather harmless sleeping pill.  A much needed one since I’m not getting enough sleep as of late due to the mating season in my bedroom.  No, not what you think.  Birds! male birds, doing the entire Hava Nagila rendition at 4:30 in the morning in order to attract their female counterparts.

East Village in June, as I was showing to my Aussie friends, feels like mating season as well.  Its the east coast capital of pretty people.  Friends that live there give 2nd Ave nicknames I can not repeat here.  And on buzzy St Mark’s, in the middle of all that, you find little Timna, a modern Israeli joint with Nir Mesika (Zizi Limona, Milan, knows his hummus geography) at the helm.  When I visited young Mesika in the kitchen, I was announced by the manager Downton Abbey style.  The guy has all the talent and knowledge in the world, but has the look of someone in the early stages of a soccer career, rather than a world class chef. 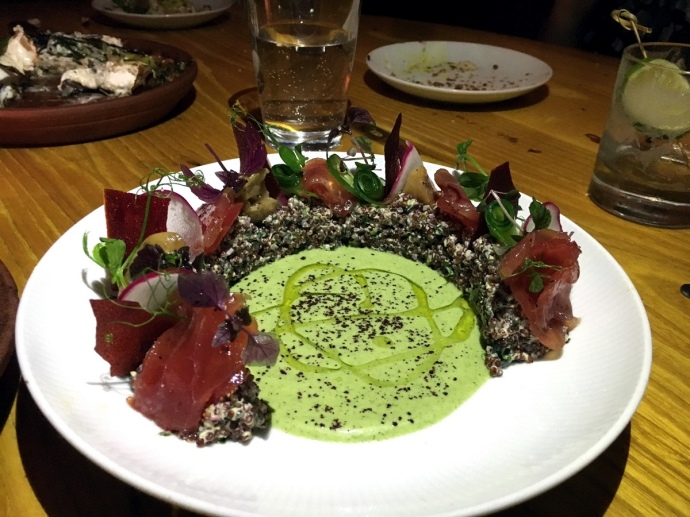 Other than a slight discomfort at the rounded table at the back, with some A/C issues, this was a very enjoyable evening.  Started with the infamous freshly baked Kubaneh that comes with some yogurt, a tomatoee salsa and “Jalapeno Salsa” which is essentially green Yemeni S’chug.  If you have a Challah fetish, you will wet yourself over the taste and texture of this thing, and its a must get for groups especially (I wouldnt order it solo).  But as with most bread courses out there, its a bit overrated, and serves as a sharp reminder that the free bread course days are just about over.  Give me The Marshal french loaf with homemade butter any day of the week.  The obligatory Cauliflower that you will find in every Israeli corner, did not disappoint.  Here Mesika elevates it with curried yogurt, dried grapes among other deliciousness.  A veg-ful burrata is more proof that a sprinkle of Za’atar (oil in this case) makes everything better.

Mesika assembled a playful menu with influences from all over the world (Chinatown salad!) especially in regards to the raw stuff.  A Ceviche salad featuring mahi on this particular night was the weakest of the ones we tried.  A fine tzatziki tartar with minced lamb delighted Mrs Ziggy especially.  And the Mediterranean Sashimi featuring cured tuna, green Tabouli salad with quinoa, and crispy beat “leather” did the trick, including in the looks department  A somewhat deconstructed lasagna featuring slow cooked tender spareribs, and Jerusalem artichoke chips is another example of Mesika’s playful brilliance. 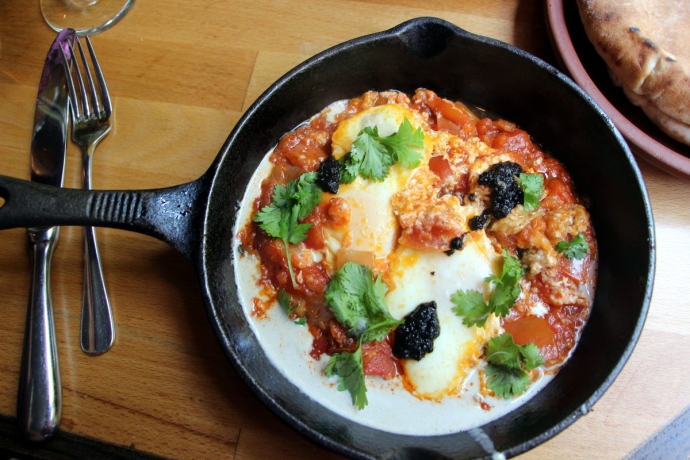 But the most interesting dish of the night sounded the most boring, Bedouin Octopus.  Mesika tenderizes, sous vide style, the heck out of this thing (I’m guessing by the size, it was enjoying the coast of the Portugal a few days prior).  A bit softer than I like my octopuses.  Then he finished it on an open flame like the Bedouin 200 kilometers south of Mesika’s home in Israel.  This is by far the smokiest Octopus I’ve ever had, and one of the better, even while lacking the proper texture.  We skipped dessert.

Brunch in Timna is another delicious event.  And one of the better brunch values out there.   For $25 you get a selection of small salads (salatim) to share, any of the entrees, coffee (very good), and the obligatory Mimosa.  We sampled an average Hummus Masabacha which I’m not a big fan to begin with.  A nice Sabich Croissant, though I still prefer my Sabichs in a pita.  One of the better Shakshukas out there.  And a very solid burger with fried egg. 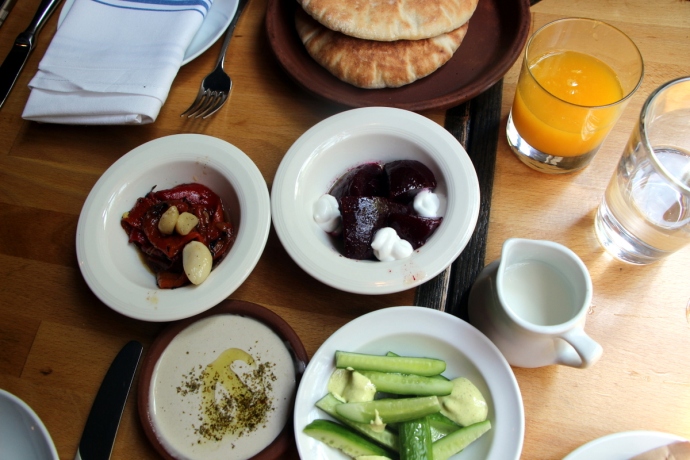 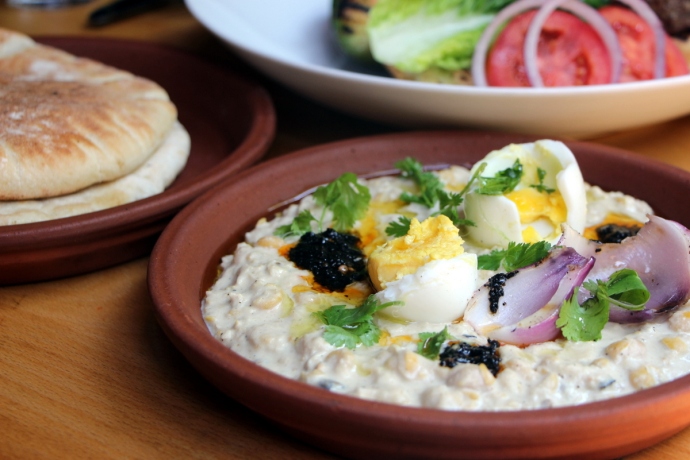 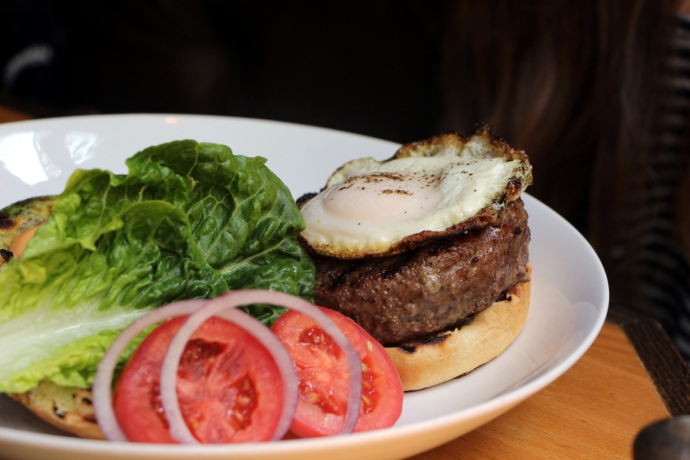 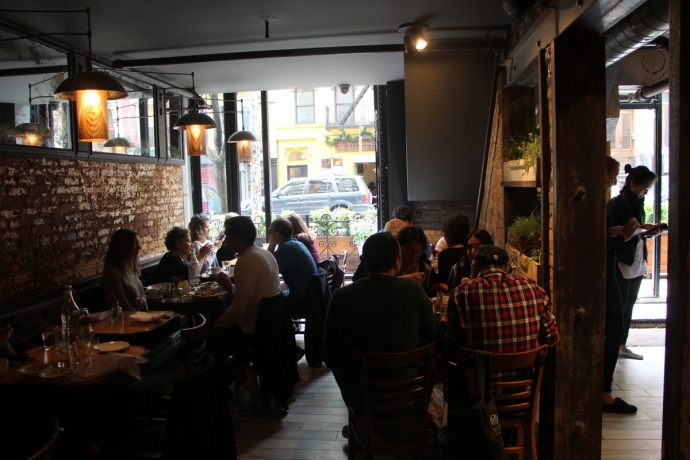