Shaky initial reviews, death in the family, Michelin, the dog ate my restaurant sheet – Just some of the reasons why I never made it to Uncle Boons before.  The bizarre Michelin star actually helped for about 5 minutes since I happened to see a tweet of the leak before the news broke out, and I was able to reserve a table immediately.  But on the day of the visit, I had to cancel, and reservations since then are virtually impossible.  Just like Pasquale Jones, and others who use Resy for roughly 20% of their tables, reservations are hard to get.  Solution:  Another gondola stroll throughout Little Italy while you wait for your table.

Ironic isnt it?  That Nolita, which means North of Little Italy, that famous food street, is arguably the best food neighborhood on the east coast.  Estella, Cherche Midi, Rubirosa, Pearl & Ash, Osteria Morini, Pasquale Jones, Balaboosta, Uncle Boons are just some examples of what you’ll find in this little tiny Foodie paradise.  Thats an impressive list of Z-Listers, and Z-list wannabes.  Taking that Little Italy, Chinaton stroll is one way to combat the NoLita popularity.  Though I fear, one day, one of these “Ciao” guys trying to lure me inside a Little Italy establishment will give me an offer I cant refuse.  Btw, when a total stranger says ciao to you out of the blue, there’s zero chance that he’s Italian.

When you walk inside Uncle Boons you immediately notice two things.  1)  How uncomfortable everyone looks.  2) Rotisserie chickens slowly spinning behind the glass.  Clearly the chickens are there to serve as hypnosis, especially against French Rotisserie chicken loving Michelin inspectors.  Otherwise, how else would you explain the anti-Michelin scene at the bar and on the side of the entrance.  One woman was practically bent sideways while enjoying her Yum Kai Hua Pli.  Considering there are two other rooms, one with communal tables, leading you to your table is like the dining version of Russian roulette.  We survived the bullet at first it seemed, but then realized the third wheel of the booth next to us, has his back practically leaning against our table.  The place is so cramped, taking pictures of the food means taking pictures of your neighbor food as well.

But all is well at the end when the food is this good.  The two Per Se veterans created a Pok Pok like menu that is very far from your average Thai.  Just like Pok Pok’s Andy Ricker did, Matt Danzer & Ann Redding traveled all over Thailand, gathering inspiration.  And just like at Pok Pok, creative drinks is part of the game, and a certain chicken is more than just sitting pretty for Michelin inspectors. 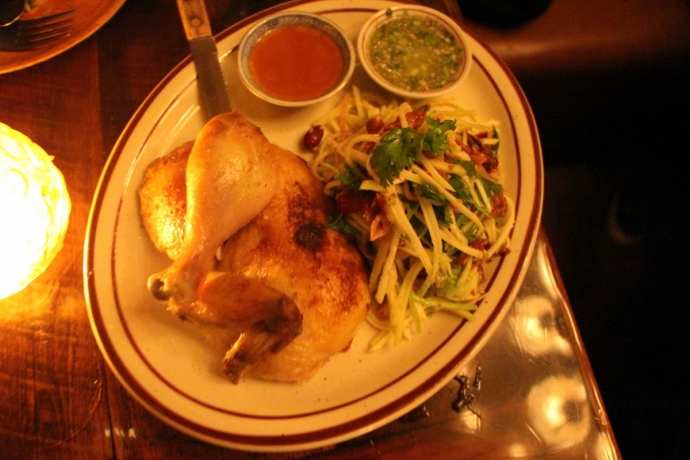 Frog Legs – If you’ve never had frog legs before, this is a good place to start.  If you had them before, order it still.  Garlic & soy marinated juicy fried legs over addictive glass noodles, and lemongrass & Thai herb salad.  There’s not a whole lot of meat on those bones understandably, but every bite counts in a big way

Crab Fried Rice – A pretty standard fried rice with heaps of chunky crab.  The flavor is there, but if there was one thing missing from that texture is some crunch by way of socarrat

Rotisserie Half Chicken – By itself, with all its tenderness and juiciness, the chicken would have been a solid but somewhat dull dish.  Which is where the sickest green mango salad comes in, along with two dipping sauces.  The lemongrass, Ginger sauce in particular works like magic with that chicken

Seafood in Broth – Another terrific dish.  Red Snapper, prawns and clams in a rich Turmeric broth.  Mrs Z’s favorite dish of the night.  Mine was the chicken

Beef Ribs – I almost ordered it, and sort of wish I did after the table next to us got it.  The best thing I can tell you for now is that it smells amazing.  Next time I would order it along with the chicken with banana blossom salad which I was all set to order until the waitress warned Mrs Z that its extremely spicy.

Dessert – I feel like the Yelp fave coconut ice cream sundae is a bit overrated.  Though it didnt make Mrs Z make a Robert de Niro face and start spitting profusely as she normally does with coconut.  The condensed milk soaked Brioche was like a French Toast gone wrong.  I dont expect greatness out of Thai dessert, so I’m not deducting anything for that.   Uncle Boons is quite possibly the best Thai in NYC right now

Uncle Boons
7 Spring St (Nolita)
$$$
Recommended Dishes: All of the above (except the Brioche) 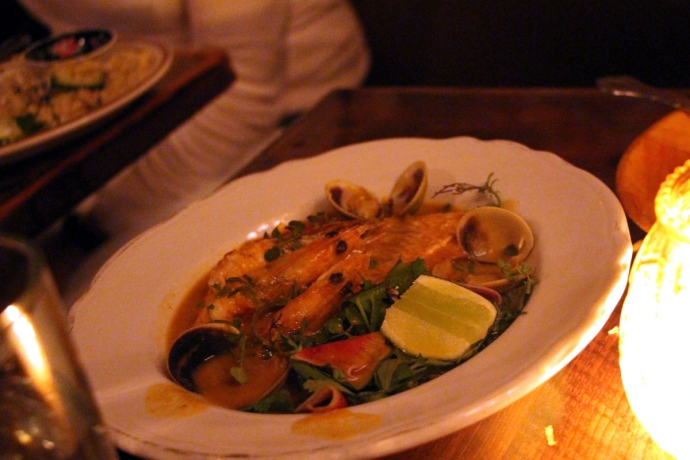 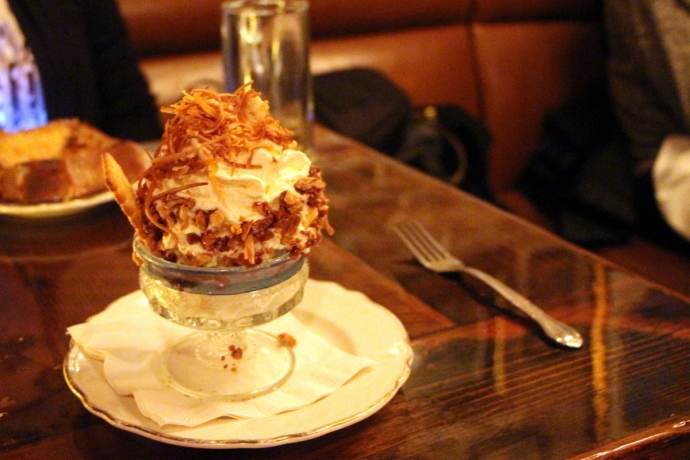