Ok, not exactly!  But inching a little closer.  Raise your hand if you get the title.

One of my fondest food trips ever was a two week falafel/hummus/shawarma extravaganza all over Israel about three years ago.  And one of the many memorable eats on that trip was the Halvah from the Halvah Kingdom, a long time staple in the famed Mahane Yehuda market in Jerusalem.  Its quite a sight.  A grown man wearing a crown standing in the middle of the market, handing out free samples.  If there was ever a free sample that works like magic, this was it.  The Halvah had a kind of softness and freshness to it that I’ve never had before.  And the amount of various flavored Halvah on display was impressive in itself.  We bought some for the hotel, and enjoyed it on a daily basis with our Shoko, chocolate milk in a bag (you make a very small hole with your teeth in order for it to last for a while – its that good).  I always wondered why we cant get the same type of Halvah here in NYC, and further research pointed to the challenges involved in making it, which doesnt quite coincide with demand.

So you probably heard the shrieks of New Yorker Jews when it was announced that the Chelsea Market will have a new tenant specializing in Halvah and other sesame seed (Seed+Mill, get it?) related goodies.  Over a dozen gorgeous Halvas line up Bunny Ranch style waiting for you to pick and taste.  Dark Chocolate, Coffee, Nougat, Cinnamon, Pistachios, Cranberry are some of the flavors on display.  Nougat gets the edge for me, but I’d urge you to try the others.  You can buy them at $6 per quarter pound, to go, or simply eat it right there by the giant windows on the side.  Who said there are no seats at Chelsea Market?  I did.  Many times.  But they exist.  You can also try the Halvah on their awesomely fresh goat milk ice cream.

Passionate part owner Rachel from Chelsea via Australia knows all about the Mahane Yehuda phenomenon.  She tells me the Halvah is made in Israel based on their specifications, and they are looking to expend on the flavors as they go along.  They also sell Tehina, and spices created in conjunction with spice guru Lior Lev Sercarz at La Boîte.  It’s a modest, somewhat hidden counter for now, but with big plans in store.  Its just a matter of time until Rachel gets out to the main hallway, wearing a giant crown. 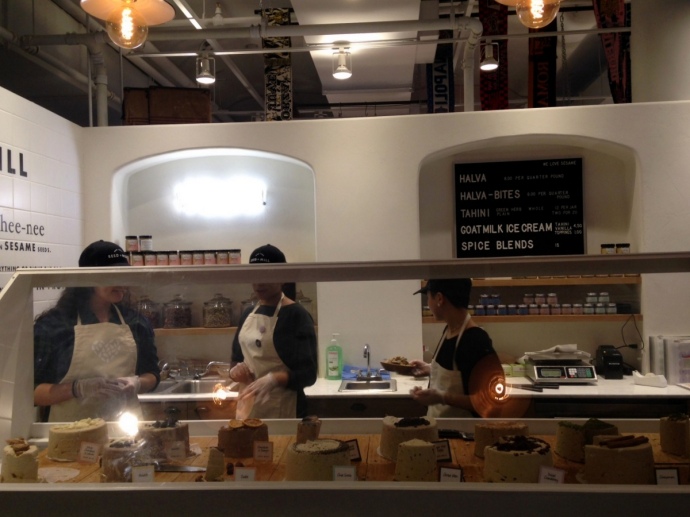 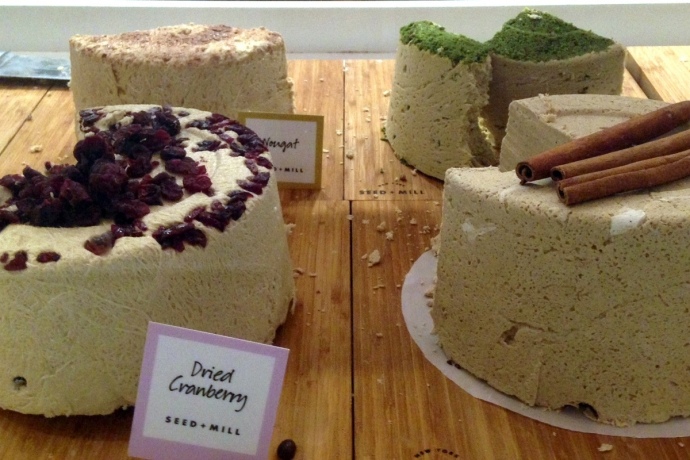