Khe-Yo – Steak of the Year and More

Feels weird writing about steak after the horrific events in Paris.  But life goes on.

Steak to me is like Family Guy.  I enjoy it tremendously, but rarely seek it.  I grill it at home, I order it when I feel like it, but rarely crave and go out of my way for it.  Steakhouses in general are not part of my regular diet, and the vast majority of my steak intakes come from non-traditional steakhouses and elsewhere (Italian, French, American).  But then, about once a year, I get to taste something like this, which makes me question my diet and our overall existence.  I’m well overdue with this post since this particular piece of meat has been on my radar for a few years now.  And for the same reason I dont record new Family Guy episodes, I’ve never actually made it to American Cut to have it.  But I thought this was a post about Khe-Yo Ziggy.  Liar!

American Cut is Marc Forgione’s steakhouse in Tribeca.  Khe-Yo is its exotic, wild half sister.  She sleeps naked, whistles at construction workers, and doesn’t come to company meetings on time.  Khe-Yo is a collaboration of Forgione, another dude, and Laos born Soulayphet Schwader offering Laos inspired dishes (Essentially Thai on Crack).  I’ve been to Khe-Yo before including four days after it opened in 2013, but this time I figured I’ll bring Mrs Ziggy for her first Khe-Yo experiences.  However, things didn’t quite go as planned.  They were better. 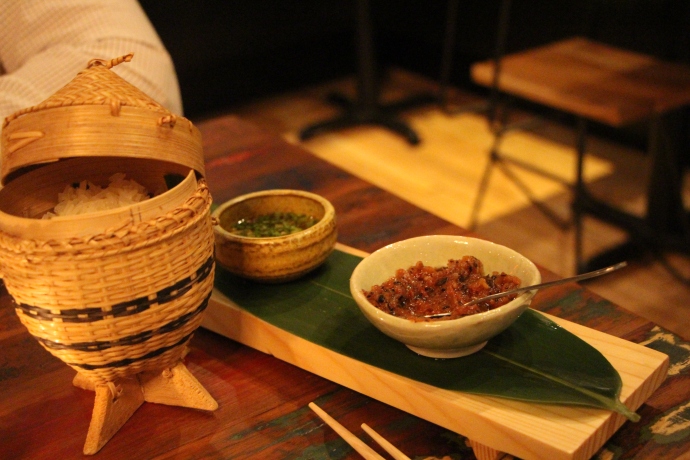 Before the waitress had a chance to tell us about today’s specials, I already knew that we were having the steak special.  That’s because my sharp steak radar was able to pick up these words from the table nearby “Pastrami, rubbed, rib eye, hmmmm, yes, so good”.  It sounded like what you normally hear at the other end of a sex line (I was told).  The Ribe eye, rubbed with pastrami seasoning is after all, the Amarican Cut classic I keep hearing about.  And it was as magnificent as I imagined.  Expertly cooked, good size steak, that’s easily shareable between two ($56).  The meat cant get much more tender for a rib eye, with perfectly rendered fat.  The peppery pastrami crust is nicely charred and buttery.  Its the perfect steak!

If you want a great steak you should probably go to American Cut.  If you wan to experience the bold flavors of Laos, dont mind to get your hands dirty (or dont mind having your spouse feed you in public), and can handle some heat, than I highly recommend Khe-Yo.  They start you off with a bang, the complimentary sticky rice with fiery “Bang Bang” sauce (lime, chili, fish sauce) that sets the tone for things to come.  You eat that and much of the rest with your fingers.  The smell for the next 10 hours is complimentary as well.  Try the complex Jurgielewicz Duck Salad, the quail, and the crunchy coconut rice balls with sausages.  I wish they would provide more sausages with that rice.  And finish off with the apple crumb with pineapple and rum raisin ice cream.  The whole meal is like Havah Nagila in your mouth!

One thought on “Khe-Yo – Steak of the Year and More”