Welcome to Two for Tuesday™, a new column on EWZ, featuring two places that well represent another city, state, or country.  For the time being Two for Tuesday will be featured on the 1st Tuesday of every September.  But I may increase productivity if I get enough likes.  This one is for my LA readers (both of them).  We’ve been to LA many times, so its about time I write a little something about this wonderful little town where no one walks anywhere except to/from rehab, and everyone looks like the cast from Baywatch

Eclectic Venice Beach –  Tourists, hipsters, beautiful people, homeless, muscles, homeless hipster, Venice Beach got it all.  But finding good eats at places like this is like catching Miley Cyrus wearing pants.  So imagine my surprise when I found this hole in the wall that was some of the best simple Peruvian food I ever ate.  The Lomo Saltado, a Chinese like beef and veggie stir fry was on point.  The rotisserie chicken which the Peruvians do so well was seasoned to perfection and quite impressive overall.  Mrs Ziggy was especially taken by the Papa a la Huancaina, a boiled potato in a beautifully spiced cream sauce.  The ceviche did not disappoint.  This is a take-out place with maybe 6 or so seats as you can see, but oh boy what a hidden gem in Venice.

I saw a medium Igor, but “Big Itzik” or “Big Isaac” was nowhere to be found.  The food though spoke volumes.  Big sprawling family friendly place dishing out simple traditional Israeli  goodies.  One of those “I wish we would have this in NY” moment.  I can think of plenty of small falafel places, and larger haute Israeli, but nothing like this, where you can just come in announced with 15 of your closest friends.  Hummus with mushrooms was especially noteworthy among the starters.  Falafel tasted like proper falafel.  Good quality lamb chops, chicken kebabs (aided by a homemade s’chug.  Ask for it) and schnitzel.  They make their own Mititei, a Moldovan/Romanian kebab made of ground mixed meat.  This one was of the heftier, juicier kind.  Some Eastern European influence perhaps by medium Igor. 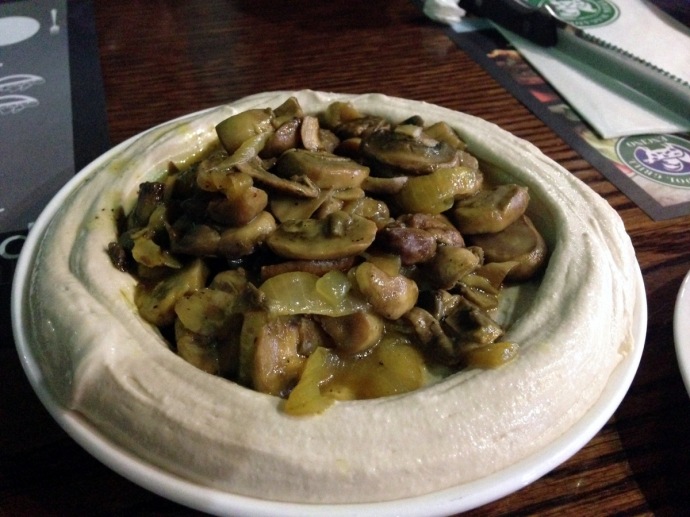 2 thoughts on “Two for Tuesday (LA): Peru and Israel”