Why Di Palo’s is my Favorite Food Store in NYC 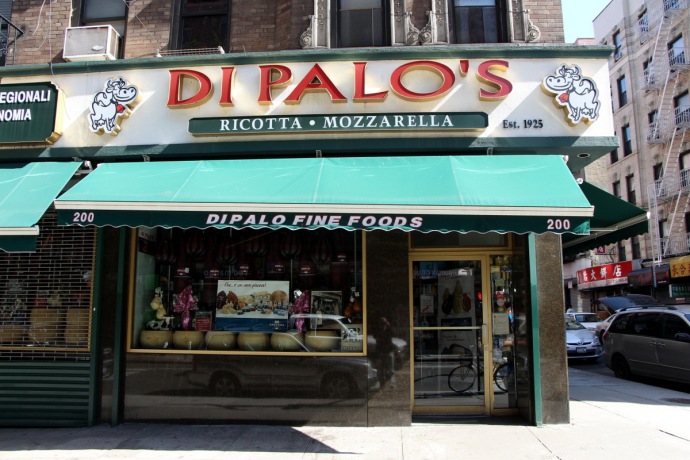 My absolute favorite thing to do while on vacation is, you guessed it, eat.  And my second favorite thing is to read about what I’m going to eat on my next vacation.  Instead of reading a book about Sicily, I opted to read Lou Di Palo’s wonderful Guide to the Essential Foods of Italy, hoping to get some useful tips on my next destination.  I got that and then some.  It was especially great reading about the history of the store, and the stories, moving stories, about Lou’s life and travels in Italy.

The book reaffirmed something I suspected all along.  There’s nothing like Di Palo’s in the city of NY, and maybe even in the entire USA.  After just finishing the book, I cant wait stop by the store.  This time I’ll be one of the ‘jerks’ that bypasses his turn in order to be served by Lou.  I need more Sicily tips Lou, like where’s the best pizza in the Trapani.

Walk on Mulberry street between Broome and Hester on a sunny day, and you may notice a peculiar thing, or three.  People sitting, watching other people, and everyone is eating the same thing.  Penne with red or vodka sauce (I presume for the Russians), Frutti di Mare, and the occasional chicken parm parked right next to their guidebook.  I apologize to the people watchers who had to endure me through the years but I just love walking on that stretch simply because its such an interesting and unique attraction.  A street in the middle of Chinatown devoted entirely to tourists.  Dont get me wrong, I would not expect anyone to know that there are gems like Rubirosa, Osteria Morini, and Parm less than 5 minutes away, just like I would not know where to eat in their hometown.

But lets think for a second what would happen when the guidebooks finally get the memo that there is no such thing as Little Italy anymore.  All the businesses will most likely close, except for one, Di Palo’s.  Ok, maybe La Mela as the last of the red sauce mohicans.  But Di Palo’s has been there for almost 100 years, and unless they get booted out they are not going anywhere anytime soon.  Instead of sitting at a place that bills itself as home to the “Best Canolli in the World” (of the pre-filled and frozen kind) and watch people that look like me (again, I’m sorry), you should be sitting in Di Palo’s breathing history.  This is the real Little Italy stuffed in this small enclave on Grand steet, with a story bigger than all the red sauce joints on Mulberry combined.

This is not the place for a quick purchase, unless you come early in the morning when they first open.  In here you linger.  This is the only store in NY where you feel good about getting a number and dont really mind waiting much, because you know you’ll be getting the same kind of treatment when its your turn.  Once your turn is up, you may get one of the Di Palo’s (Lou, Sal, Marie) or one of the trusted workers who are probably used to seeing people skipping turns just to get one from the family.  Either way, you will get a personal interaction that is almost unheard of in NYC.  With almost zero regard to the amount of people waiting, you will be able to taste just about everything the store has to offer, and have fun doing so.  Spending more than 30 minutes is not that far fetched, and if you get Lou, Sal, Marie, chances are you’ll want to be there for an hour.  Many top NYC chefs do the same thing, come in and take a number. Chef Daniel Boulud calls Lou Di Palo one of the seven wonders of New York.

What to try/get:  Their fresh Mozzarella is extremely popular.  Burrata, aged Pecorino, Parmigiano-Reggiano, Mortadella from Bologna, not NJ.. Soppressata, Prosciutto di Parma, Cacciatorini (hunter salami), peppered salami, Finocchiona, Felino from Felino, not Utah.  The one item I absolutely must get every time is Truffled Pecorino.  They have several, usually from Sardinia or Tuscany.  Eataly has none.  Also you can get Sullivan Street Bakery Focaccia (great for a picnic), fresh pasta, various sauces including Urbani truffle sauces and more.  If you havent been and enjoy good food, you owe it to yourself