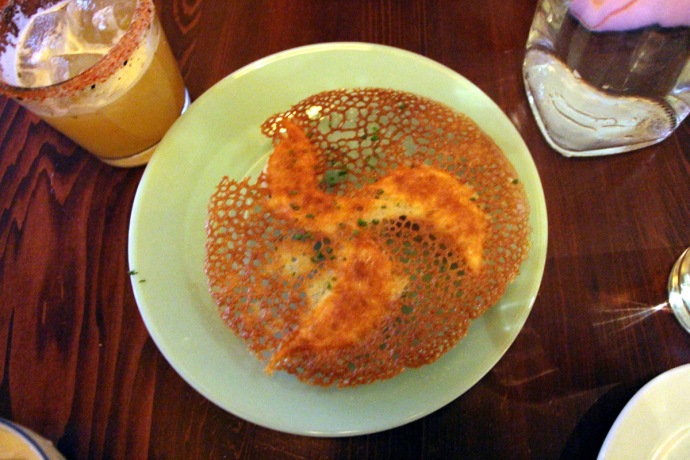 Mission Chinese Food continues to tickle and tackle my taste buds.  But at the same time its becoming more and more apparent that not all dishes work for everyone, and my ability to properly select from this menu is shaky at best.  It almost seems like its strength and claim to fame, the ultra fiery stuff, is also its weakness.  People either love the numbing heat or hate it, while the hate is strong enough to keep its Yelp score shockingly low for a place with such profile.  But even much of the love..  “The wings were KILLA, but I couldnt finish more than 3” is questionable.  In a normal world, you dont recommend a dish you personally gave up after laboring a quarter of it.

To me the strength lies in the more subdued plates.  Like the Green Tea Noodles, and the simple but proper fried chicken.  A less subdued solid discovery is the addictive spicy noodles with peanuts, and cold shrimp that dont bring much to the table.  But the shocker the other day was the expensive, great sounding Fragrant Crab Rice that turned out to be bland and uneventful.  It was essentially a bucket full of dry rice, with crab that is totally lost, and no scent to speak of.  Here, such dish can quickly turn into an expensive side dish to balance the heat from other dishes.  This is also where the Tom Khallins drink comes in handy.  Go, still, but not as enthused as before. 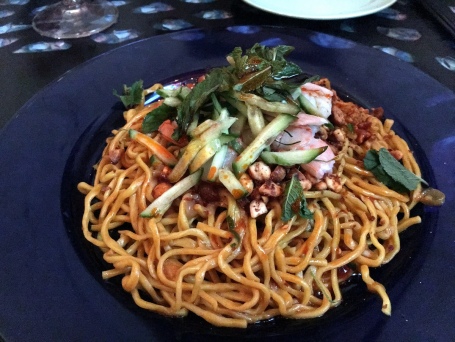 Yesterday I got a disturbing text from my barber.  It wasnt so much about the content of the text, but rather the fact that I got a text from my barber that was alarming.  Initially I concluded wrong number, but then I remembered that my barber was the only person I know that calls me by the wrong name.  I gave up correcting him 5 years ago and simply play along.  “Terry, I moved to the other side of the mall, by Macy’s.  Please confirm that you received this text”.  After confirmation, he was very delighted that I showed understanding, and opted to stick with him!?!  Well, why on earth wouldn’t I.  Should I consider perhaps that the other side of the mall is further away from my house?  Maybe he’s implying lack of parking?  I’ve only been with him for 16 years.  Should I drop him because the other side of the mall doesnt have an Auntie Anne’s soft pretzel stand, and simply hire one of the old schmucks taking a nap at 10 am?  I always show up to a Bunny Ranch-like lineup of sleeping barbers to choose from.

In similar fashion Mission Chinese Food moved from the LES to Chinatown, pretty much the same distance as my barber.  Danny Bowien, and MCF opened with a bang initially, even winning in a rather shocking fashion the coveted Best New Restaurant of 2013 from the New York Times.  Not too long after, it was closed by the Health Dep’t, reopened shortly after, only to close for good shortly after that.  For its fans this unfolding was difficult to watch.  As difficult as watching a baby seal getting clobbered to death.  If I would only have a nickle for every favorite Chinese restaurant closed at some point by the Health Dep’t, I would have a Quarter by now. Who cares if there’s evidence of mice.  As long as the mice and I are not there at the same time.

The new space, compared to the old, is comically stunning.  Like a bizarre cross between a fancy diner, a steakhouse, and a Lucky Cheng’s.  It kept some of the furniture from previous tenant Rosette, including a pizza oven which they utilize for pizza and bread.  Comfortable booths, chandeliers, and Lazy Susans unlike the Lazy Susans at my Doctor’s office where you just got lazy women named Susan.  When you add this all up, including the many mild additions to the menu, you get something you can bring your family, or even your in-laws.  But contrary to the way it looks inside, and the sign outside, it is very far from your average Chinese joint.

Started with one of the most unique drinks in recent memory (about a week give or take).  Tom Khallins – Old Tom gin, coconut milk, kaffir lime, lemongrass, ginger, chile, and sesame oil served in a small tea bowl.  After this and Pok Pok I’m really starting to get into those coconuty drinks.

The “Bread Service” is essentially a delicious smoky round Laffa with kefir butter spread.  It comes with a price tag ($7) that will make any Israeli or Arab shiver, a la the Jerusalem Bagel at Bar Bolonat.  Although the great free cilantro and scrambled eggs dumplings leave less room to complain.  One good reason NOT to get the bread is that it takes a lot of space on the table that you will struggle for very soon.

The Cumin Lamb Ribs while on the fatty and chewy side were somehow more satisfying that the previous version.  The Dates in this dish alone are worth the price of admission.  On the other hand, the Kung Pao Pastrami went from my favorite to least favorite of the night.  The pastrami this time was much more charred, with texture closer to the potatoes it came with rather than that great pastrami of 1.0.  It wasn’t bad overall, but the rest of the lineup was just better.

Like the great Beef Jerky Fried Rice with Beech Mushrooms.  Wildly flavorful, but only the second best fried rice dish of the day (oxtail fried rice @ Blue Ribbon near Columbus Circle for lunch).  And if I would have to pick a favorite this night, it would probably be the Green Tea Noodles with ginger scallion, hoisin, and the great matcha flavor which makes the dish.  The only issue with this one is that the noodles are so stuck together (not so much in a bad way), that its difficult to remove a portion if you are sharing.  Eat this like Chinese eating rice. 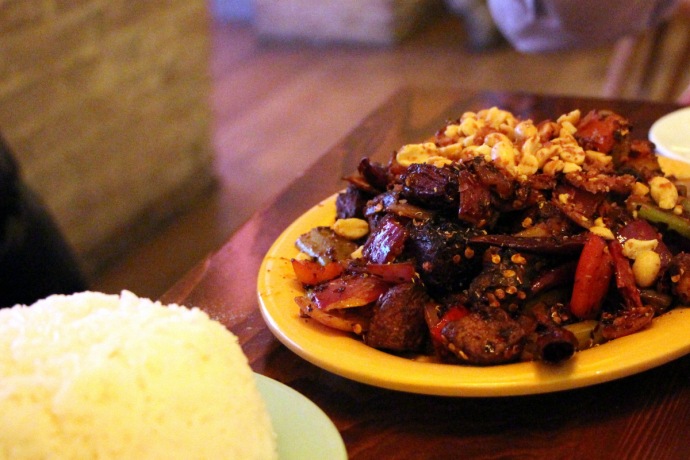 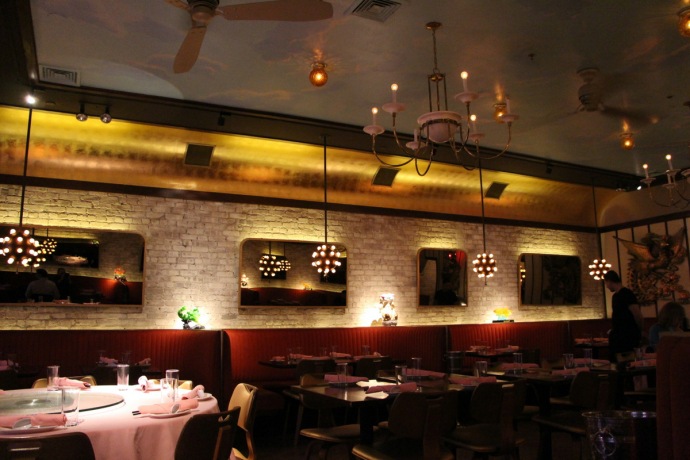