Just dont call it a steakhouse.  The brainchildren behind this meat project, John McDonald, Josh Capon, and Paul DiBari dont like that, and for good reason really.  “Steakhouse” is stale, uncool, touristy and boring in today’s NYC.  You cant hep but get the feeling that traditional steakhouses not named Peter Luger still exist for tourists and older generation New Yorkers.  I cant recall the last time my friends said “hey how about bowling and steakhouse”.  But my father in law does ask on occasion, only to get that painful reminder again that he cant eat raw meat.  I predict that just like with the demise of Jewish Delis the steakhouse will eventually be replaced with places like Costata, Minetta Tavern and Bowery Meat Company.  These are full menu, modern steakhouses with each having its little niche (eg. crudo, pasta, burgers, oysters) in addition to great steak

Even Yelp is confused, giving BMC the cafeteria “Salad, Italian, Seafood” tag.  As in “Hey what do you want to eat today.  Sushi, Russian, or ‘Salad Italian Seafood'”.  I suppose BMC is more about “Salad, Italian, Seafood” than “Croatian” as the title suggests.  But only the savvies of the foodie travelers understand the role Croatians played in the evolution of Oyster fishing, and the invention of the Charbroiled Oyster by the legendary Drago’s in New Orleans.  The same Drago’s oyster was the influence behind the Charbroiled little ones at BMC, though I’m leaning toward the cheeseless version at Felix’s myself.  If there’s one complaint about this “I cant believe this is not a steakhouse” meat company is the excess of cheese and in some cases salt.  At some point it felt like one of those Borat “And what is this?  its cheese” episodes.  But yet, I would still put BMC on top of any steak seeker list today.  And there was absolutely nothing wrong about the soon to be famous Steak I highlight below. 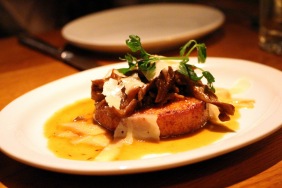 Bowery Meat has quite a few nice pluses, starting with the pre-meal freebies that you wont get anywhere else.  Rosemary Focaccia with what looked like small Finocchiona slices was gone before I could take a picture.  And to top that, some schweddy balls in the form of oxtail arancini were quite good.  They can easily charge for this stuff, but they dont.  Others should note.  Even free bread these days has been replaced by $6 fancy bagels with frozen “homemade butter”

Crispy Polenta –  Mushroom and Shaved Parmesan.  Nice starter.  Polenta not so crispy but thats a good thing as the texture was a perfect not too soft, not too hard.  Mushroom had a nice sweet tone and could have used some more earthiness or crunch.

Broiled Oysters – Garlic, Romano Cheese, Bread Crumbs, Parsley.  The great aforementioned Oysters inspired by Drago’s in New Orleans.  There are many folks out there like Mrs Z that will eat this over the raw stuff, so you gotta wonder.. what took you so long New Yorkers!

Short Rib Ravioli – Bacon, Rosemary Butter, Aged Balsamic.  Six large ravioli.  Nice meaty flavor and quite exceptional.  But covering these with cheese was a slight turnoff.  If I want my ravioli smothered with cheese I’d go to Staten Island.  I would order this again though.  Just hold the cheese.

Duck Lasagna for Two – Caciocavallo cheese, Parmesan.  As with anything “For two” in NYC means “For 4” or “for a small Armenian village”.  I would never order something for 2, for just 2.  But we were 4.  Like the ravioli this also had excellent meaty flavor, and no sauce that I recall.  Soft lasagna sheets, duck and cheese worked together nicely.

Cheeseburger – Griddled Onion, Raclette, Tomato Aioli, Fries.  This is an almost great burger.  My suggestion:  Change it to Burger.  Lose the cheese!  Raclette is generally quite salty, and this beautiful 40 day aged chuck, brisket, and sirloin combination should not be messing around with.  The fries were so salty they were not edible.  Perhaps they were gearing up for Justin Bieber who visited with his girlfriend the next day.  My youngest still cant believe she went to BMC on the wrong day

Bowery Steak – Salsa Verde, Whipped Potato.  A Triumph!  The steak of the year, and one of the best I ever had.  As soon as I touched it I knew it will be good (so many jokes with this one, but I’ll leave it alone.  Its a family show).  There’s no name to this 8 ounce meat perfection.  The best part of the ribeye, the ribeye cap is flattened and spiral-rolled into these Hockey pucks by who else, Pat LaFrieda and cooked to perfection.  Here’s your Michelin star right there.

Bowery Meat Company
9 East 1st Street
$$$$
Recommended Dishes: All of the above. But make sure to get the Bowery Steak 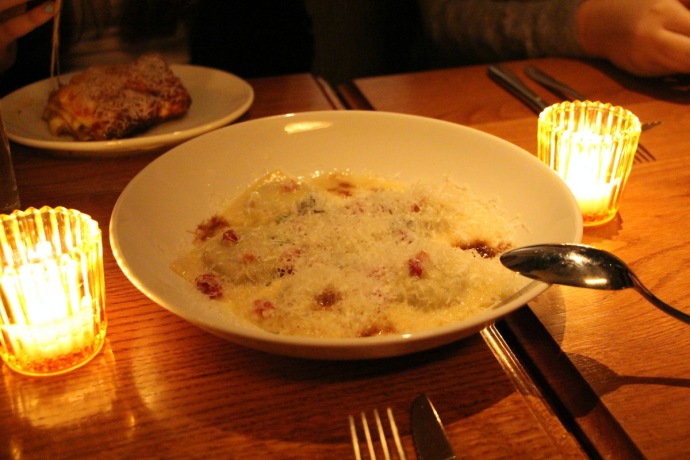