First I should probably explain the title…

Taim – Means tasty in Hebrew.  And is a popular Falafel joint in the west village

WTF – Means What The Fuck

But –  Means except for the fact… 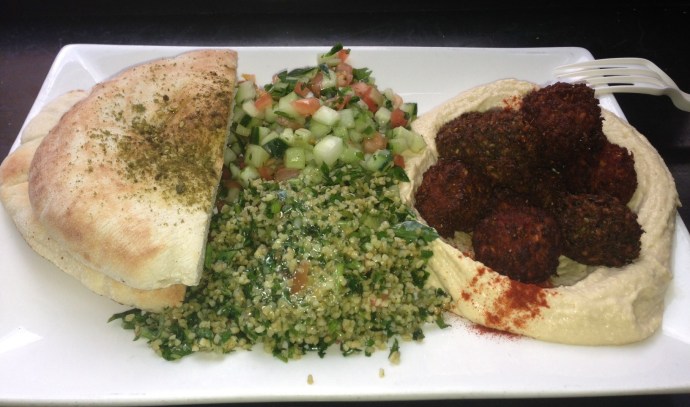 Taim Falafel and Smoothie Bar on Waverly serves some very Taim Israeli pocket food and more.  Small but fierce Falafel balls come in 3 different flavors:  “Green” which most resembles the traditional Israeli falafel, “Harrisa” which is red and packed with mild Tunisian spices and my personal favorite, and “Red” which is another red but mixed with roasted peppers.  The best way to try all 3 is to get the mixed platter which is a good amount of the 3 (around 10 balls – compared to the slightly larger 3 balls by Azuri café, another best Falafel in NYC candidate but losing ground with me).  In addition you get a very Taim, creamy and nutty Hummus, Israeli Salad and a Taboule salad.  The pita is warm and sprinkled with zatar seasoning which is a very nice touch.

You also get 3 different sauces with that: Tahini, Amba (terrific, smell my finger pickled Mango chutney), and something called S’rug which is supposedly a Yemeni hot sauce.  Now here’s the thing.  I am very familiar with the similar Yemeni Hot Sauce called S’hug and I’ve seen it spelled S’chug and Z’hug, but S’rug is something new.  In fact if you Google S’rug you will only find it mentioned in relation to Taim pretty much.  Quotes by Yelpers and other food bloggers mentioning Taim’s hot Yemeni sauce S’rug as if such a thing exists.  Why do they call it S’rug?  Its like a place that makes Falafel but decides to call it Fakafel, joined by a food blogger army praising the Fakafel without ever mentioning the real thing, the Falafel.

Wait, not finished digressing.  I also happened to be a big fan of the S’chug which is a staple in my fridge.  In fact I have 2 kinds at the moment including the pictured Pereg S’chug which is my absolute favorite.  I spread it on everything.  Goes very well with bread and salami.

But now I digress.  Taim, also serves a delicious Sabich, the falafel’s shy and not as good looking cousin.  Sabich is eggplant, hard boiled egg, Tehini, Amba, and Israeli salad inside a pita.  And their smoothies such as the date, lime, banana, are fantastic as well.

Taim is a tiny popular neighborhood spot.  Its more of a takeout place as it has just enough room for 4 adults and a small cat.  Everything about this place is fresh and delicious including of course… that Yemeni hot sauce… S’rug. 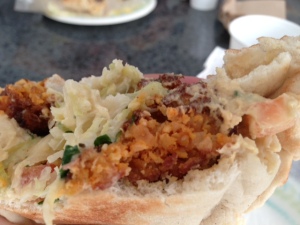